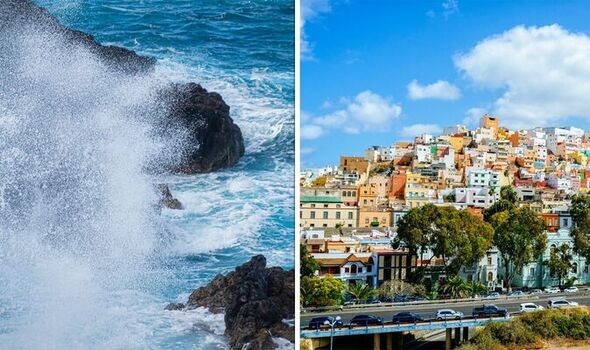 Spain’s Canary Islands could be affected by strong winds that will make it dangerous to swim this weekend. Several areas of the islands will be under a weather warning on Saturday.

The weather warning will be in place from 6am local time on Saturday morning until midnight that day.

Strong winds of up to 70km per hour are expected in south Tenerife, south Gran Canaria and the whole of La Palma and La Gomera.

Tourists are advised to follow local advice and be aware that it may be dangerous to swim due to the winds.

However, the temperature is expected to stay warm over the weekend with the forecast in the high 20s.

There is no weather warning in place for Lanzarote, Fuerteventura or El Hierro where mild weather is set to continue.

This week, the Canary Islands were the hottest place in Spain with temperatures above 32 degrees.

Although the Canaries usually enjoy warm temperatures in winter, it has been unusually warm for this time of year.

The sunny islands are a top winter holiday destination for British tourists with many travelling there each year.

One popular holiday area in Gran Canaria has recently introduced new rules to attract a better class of tourist.

Mogán, a coastal area on the island, is set to introduce rules against drying clothes on balconies.

Tourists will also be banned from walking around in swimming costumes and from being topless.

Drinking in the street will also be banned and there is another rule against sleeping in public spaces.

The rules are the latest in a series of new restrictions for tourists in popular Spanish holiday destinations.

The Balearic islands and Malaga have also brought in tough rules to control tourist drinking and rowdy behaviour.

A tourist boss in Majorca attracted controversy last week when they said they were not interested in “promoting the island”.

Lucia Escribano said the tourism bosses were aiming to decrease the number of available beds on the island.

She added that the destination was not interested in welcoming budget tourists from the UK anymore.

However, other tourism bosses on the island were quick to reject the comments as the UK is one of the island’s most important markets.