More than 47 million Americans are expected to travel over the Independence Day holiday between July 1 and 5, nearly matching prepandemic levels, according to AAA, the automobile owners group.

More travelers mean higher prices. The travel app Hopper said a good deal on a round-trip domestic flight over the holiday period cost $302 on average compared to $280 for the rest of the summer. AAA puts midrange hotel prices up about a third over normal rates. The rental car shortage has pushed rates up 75 percent over 2019 prices and sometimes higher, according to Autoslash, a service that finds cheap rentals, which recommends avoiding renting in Hawaii, Alaska, Montana, Wyoming, Puerto Rico and the U.S. Virgin Islands because of exorbitant prices. Florida might be tough, too; six of the top nine most searched destinations on Booking.com in May for summer travel were in Florida.

Squeezed by Fourth of July economics, what’s a last-minute, budget-minded traveler to do? Think like a contrarian: Go where the masses aren’t.

“Places like L.A., New York City, D.C., Austin and Chicago aren’t going to be quite as crowded as the beach, lake and national and state park destinations,” wrote Christie Hudson, a spokeswoman for Expedia, in an email. “As a result, these are also the most budget-friendly places to go for last-minute planners, showing lower average daily rates compared to 2019.”

There may also be a beach, campsite or pool in your holiday future, too, if you cast your net widely, according to the following deals and strategies for finding affordable escapes. Bear in mind that prices change often, and may have shifted since publication. And if you are priced out of the holiday, spend it planning a future trip; the Xanterra Travel Collection, which includes national park lodges, tour companies and Windstar Cruises, is holding a sale June 30 through July 8, with up to 30 percent off room rates and nearly $1,100 a person off cruises.

Whatever you do, you will need to dig deep to find a bargain. Some of that effort is expedited by sales listings at various travel entities centralizing their last-minute offers.

The tour company G Adventures has a summer sale with trips up to 20 percent off for travel through October. If you’re ready to pack your bag — and can fulfill all travel requirements imposed by the destination country — the company has several sale trips departing in the next week, including eight days walking on the Camino de Santiago in Spain beginning July 4 from $1,062 (Spain is open to vaccinated Americans) or a nine-day family-focused trip to Costa Rica from $1,300 a person, departing July 3 (Costa Rica is open to American visitors without testing or vaccination, but requires specific insurance that covers Covid-19 related expenses).

CheapCaribbean.com, as the name implies, exists to sell you deals. Many are packages bundling all-inclusive resorts with airfare. Its Last-Minute Vacations page has an array of offers in Mexico and the Caribbean over the holiday, among them trips to Playabachata Resort in the Dominican Republic for four nights, including airfare from $591 a person, and five nights at the BlueBay Grand Esmeralda on Mexico’s Riviera Maya from $808 a person, including airfare.

The hotel group Preferred Hotels & Resorts maintains a last-minute deals page, currently with rates from $122 at the Whitehall hotel in Houston.

Check the websites of tourism and chamber of commerce offices in your target destination for local offers. The business association of Provincetown, Mass., at the tip of Cape Cod, for example, maintains a link with last-minute lodging deals, including some over the holiday.

Large conventions are still on hold, and the cancellations are being felt across cities popular for meetings, including Orlando, Washington and Chicago, creating a bargain shopper’s opportunity.

Both Mayor Muriel Bowser and President Biden recently issued invitations to celebrate the Fourth in the nation’s capital. Hotel rates are creeping up — compact rooms at the Yotel Washington D.C. are priced from about $146 nightly for the long weekend — with the approach of the fireworks on the National Mall July 4 (free). The new Ven at Embassy Row hotel in Dupont Circle will reserve its rooftop and pool — in view of the Mall fireworks — for guests and screen the movie “Independence Day” there on July 2 (rooms from $250).

In Chicago, the newly reopened Sheraton Grand Chicago, just a few blocks from the lakefront entertainment district Navy Pier, and Millennium Park, home to the Grant Park Music Festival’s Independence Day concerts, July 2 and 3 (free), has rooms over the holiday weekend from $189.

As New York City re-emerges and prepares for July 4 fireworks on the East River (free), many hotels are putting their rooms on sale. Broadway remains dark, but the Westin New York at Times Square is back with a July deal starting at $209 a night midweek and $289 on the holiday weekend, including parking, a complimentary upgrade and late checkout. From July 3 to 6, the average nightly rate at Crowne Plaza HY36 near Hudson Yards was recently $195 (in fall, rates average $350).

Since it was recently announced that fireworks will resume at Disney World on July 1, the bookings in Orlando, a major convention city, are shifting rapidly. Visit Orlando, the city’s tourism office, maintains a list of local deals on transportation, dining and lodging, including rooms up to 25 percent off. The Hilton Orlando Buena Vista Palace has rooms over the holiday weekend averaging $332 a night, but if you can hold out for a weeknight later in the month, you might pay closer to $200, and still get to see the local fireworks. Over the holiday weekend, rates at Fairfield Inn & Suites Orlando Lake Buena Vista start around $176 (if you join the free Marriott Bonvoy loyalty program), and Crowne Plaza Orlando Downtown, about a mile from the city’s fireworks at Lake Eola, start around $160. 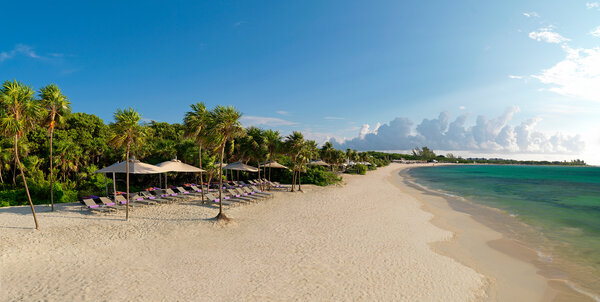 Go abroad, if you dare

If you’re game to use your passport, now might be a good time.

Time for Travel, an agency based in Davidsonville, Md., has “had great luck with booking people to places like Mexico and the Dominican Republic where a Covid test is not required to enter and the resorts are also providing free return testing,” said Sarah Kline, its president.

If you can get to Tulum on the Riviera Maya through Oct. 31, you can take advantage of a new offer from the Aloft Tulum hotel that includes a room, meals, drinks and snacks from $229 a night.

In nearby Playa del Carmen, the all-inclusive Paradisus La Perla resort has rates starting at $101 a person a night, during a brand-wide sale from Paradisus by Meliá, with discounts up to 40 percent off, running to July 5 for stays through March 2022. In the Dominican Republic, sale rates over the holiday at Paradisus Palma Real in Punta Cana start at $97 a person.

Normally starting at $425 a night, cabins at GeeJam Hotel, the stylish resort on the northeast coast of Jamaica in Port Antonio, are going for $277 a night for three-night-minimum stays July 1 through 15, including breakfast, 15 percent off other food and drink, 20 percent off spa services and complimentary use of kayaks, paddle boards and snorkeling gear. A similar deal discounts its rooms from $300 to $225. Jamaica requires visitors have proof of a negative coronavirus test.

In normal travel times you’ll pay a lot more for desert destinations in winter than you will in summer when it can be blistering.

Take Scottsdale, Ariz., the resort-filled Phoenix neighbor, for example. Rates plunge in summer, when the pool scene is in full swing. For the holiday weekend, The Scott Resort & Spa has two sizable pools, Caribbean-accented poolside dining and rates from $199 for stays July 1 through 6, compared to rates above $300 beginning in September (use promo code JULY4).

Stay over July 4 and 5 at the colorful Saguaro Scottsdale in Scottsdale’s Old Town and pay $100 a night (use the code SUMMER21). By booking on its website, you’ll get welcome margaritas and a late checkout. Skip the rental car in favor of a loaner bike from the hotel. The shops and galleries of Old Town are easily walkable.

The area is renowned for its spas and Civana Wellness Resort & Spa offers a relatively affordable version. With a fourth-night-free promotion, rooms average $237 a night, July 2 to 6, allowing guests to take advantage of complimentary daily hikes, meditation, yoga and fitness classes.

Camp on the fringes

If you haven’t planned a camping destination for the holiday, don’t head out for the marquee national parks like Yellowstone, which has seen record numbers of visitors since last summer, or Yosemite, where advance reservations are required.

Joshua Bush, the chief executive of Avenue Two Travel, based in Bryn Mawr, Pa., has been living out of a 45-foot R.V. since December and has visited 26 national parks, often making campground reservations six to nine months in advance. He recommends targeting secondary sites like Pinnacles National Park in central California (park campsites there are sold out July 2 through 4 with availability before and after), and other parks in the system, including national lakeshores.

“The National Park Service has a fantastic app that geolocates where you are and says, yes, you might be close to Sequoia National Park, but you have national historic sites nearby that might not have a waiting time,” he said.

Other strategies include calling for reservations and telling the agent that you are willing to change campsites during your stay.

“Sometimes you can cobble together a stay, if you’re willing to move,” he added.

Booking platforms like Tentrr, Pitchup, Hipcamp, Campspot and Campendium have made it easier to find individual campsites or small, under-the-radar campgrounds.

Tentrr, where many property owners offer fully equipped campsites, including canvas tents with beds, toilets and solar-heated showers, has several sites available over the Fourth with rates starting at $135 a night, including the Catskills site Mountaintop in Hobart, N.Y., and Berkshire Mountain Hideaway in Richmond, Mass., with hiking trails just beyond the tent flaps.

Pitchup is currently showing about 45 campgrounds in the United States with availability over the holiday weekend, including Little Heaven Ranch, a primitive campground about 35 minutes from Grand Canyon National Park; a three-night stay costs $150.

The demand for camping has inspired new openings, including Camp Fimfo on the Guadalupe River in New Braunfels, Texas, about an hour from Austin and San Antonio. The parklike campground, with swimming pools, a water park and tavern, opens July 1 with 80 R.V. sites, three A-frame cabins and a number of offers, including 25 percent off stays of five nights. Standard rates start around $117.

It’s a repeat summer for R.V. travel, partially because so many families discovered the value of loading into a cabin-on-wheels compared to buying multiple airfares. Do your itinerary planning before renting an R.V. or van to make sure you can find an adequate place to stop (or practice boondocking, which is camping off the grid, often on Bureau of Land Management property). Once you’ve made those reservations, you’ll find reasonably priced vehicles still available for the holiday.

Outdoorsy, a platform for R.V. owners to rent their vehicles, puts the average cost around $160 a night. Use the code All4Outdoorsy to get 10 percent off on bookings made through July 4 for travel now or later.

Travellers Autobarn rents camper vans in Las Vegas, Los Angeles and San Francisco with unlimited mileage. A summer discount program offers $50 to $250 off vehicles rented for five days or more (use the promo code “Fifty” for rentals of five days and “OneHundred” for 10 days or more). The vehicles start at $69 for a standard van and $122 for a Kuga Campervan with a microwave, sink, refrigerator and gas stove.