Sarah Firshein tries to resolve how a nonstop with seat selection became a packed “split flight,” with concerns over proper cleaning and an arrival two hours later than expected. 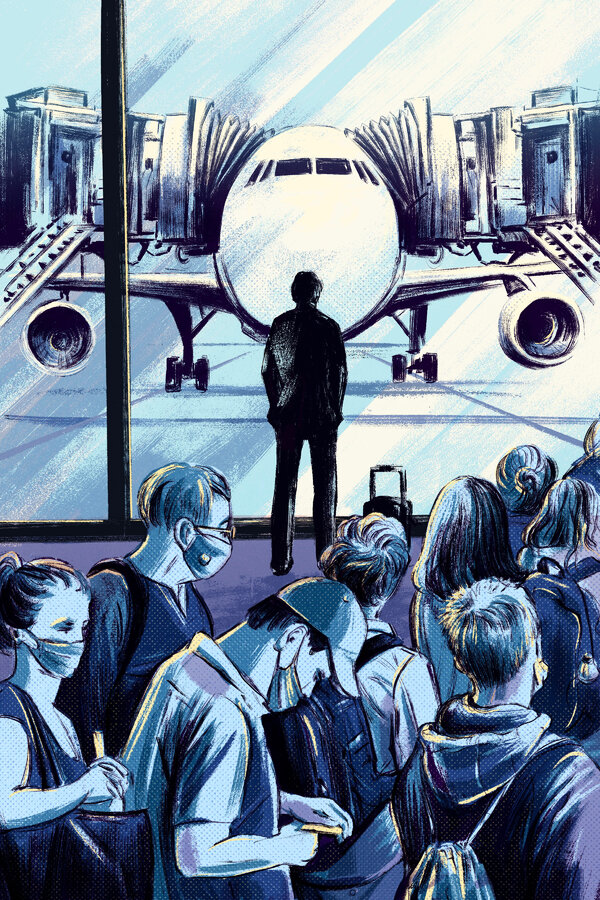 I recently bought Allegiant Air tickets from Cleveland to Orlando, Fla., and was told while booking that if the flight was more than 65 percent full, I could request not to board in exchange for a voucher. In Cleveland, as boarding started, we were advised by the gate agent that this would be a “split flight” — no explanation what that meant. The next words were: “Take any open seat.”

The extra-legroom seats we paid for were quickly claimed, and the plane filled well past 65 percent. After the cabin door closed, we were told that we would be stopping in Flint, Mich. In Flint, the plane emptied and filled again. We did not see the cabin cleaned — not even during the 30-minute ground delay. We finally landed in Orlando more than two hours after our scheduled arrival, complete with baggage that had been damaged during an inspection.

I’ve been an airline customer for more than 50 years and I’ve never boarded a plane when I didn’t know where I was going. The airline’s method of communication was appalling and deceitful — to not inform passengers that their nonstop flight was now a one-stop flight was the height of disrespect.

What is a “split flight” and am I eligible for a refund? David

That’s a lot of travel mishaps for what should have been a quick, no-fuss, sub-three-hour flight — even during a pandemic. To see if I can help resolve the issues, let’s break them down:

What is a split flight?

Split flights accounted for just .003 percent of Allegiant’s flights in August, according to the company, and are a relatively rare occurrence in aviation.

“It is not very common that a nonstop flight will suddenly announce a stopover five minutes before departure,” said Christian Nielsen, the chief legal officer at Airhelp, which helps passengers claim compensation for flight disruptions.

Why would an airline combine two flights?

In order to make money and offset high fixed costs, airlines need to sell a certain number of tickets. Today, mid-pandemic, they are having a hard time making the math work. Allegiant’s passenger numbers in August were down about 49 percent from last August, according to a new report. On the date you flew last month, nearly 863,00 passengers passed through T.S.A. checkpoints in the United States — down from nearly 2.6 million on the same date last year.

By combining two flights into one — one crew, one aircraft to fuel, one gate staff — Allegiant avoided losing money while staving off another last-ditch solution: canceling the flight.

“While it is not a preferred option and we certainly empathize with this passenger’s surprise and frustration at the late notice, during this unusual time our imperative is to err on the side of providing service to customers who need to fly,” said an Allegiant spokeswoman in an emailed statement. “A creative — if not optimal — way to accommodate more and frustrate fewer was the intention here.”

Yes. Allegiant’s contract of carriage — the take-it-or-leave-it agreement between an airline and its passengers — stipulates that flight schedules can change in any number of ways, and that the airline can “change, add, or omit intermediate or connecting stops” without notice.

These clauses are not specific to Allegiant — all airlines have them in some form. Consumer rights advocates find them problematic anyway.

“One problem with domestic flights is the lack of clear-cut air-passenger-rights regulations,” Mr. Nielsen said. “U.S. laws only regulate your rights to compensation when you get involuntarily bumped from a flight because the airline overbooked your flight. For other matters, the specific airline’s contract of carriage is often applied as the sole framework for rules and rights for the flight.”

What happens to paid seat assignments on split flights?

Unless an airline can magically produce two versions of 12B, assigned seats on split flights are a headache, and surely the “take-any-open-seat” directive did little to quell the boarding chaos. Per its policies, Allegiant refunded your seat-assignment fees (as well as the baggage fees for good measure).

What, if anything, can passengers do when an airline adds a stop?

Split flights are considered schedule changes, and it’s easier to get restitution for those if you don’t actually board the plane. Allegiant’s contract of carriage, like those of other airlines, carves out concessions for “significant” schedule changes, including refunds for unused tickets.

“We regret that this passenger did not hear of the flight change until after boarding,” the Allegiant spokeswoman said. “But even so, had he alerted the flight crew of his discomfort with the additional stop, he could have chosen not to take the flight, and instead been re-accommodated or received a refund.”

Allegiant usually alerts passengers to schedule changes in advance, she said, but “this particular flight was a late decision.”

Split flights are not tracked by federal agencies. Although the Department of Transportation collects certain data from domestic airlines (on-time arrivals, weather delays, diverted flights and cancellations), it does not explicitly track split flights, nor does it track complaints about them for its monthly Air Travel Consumer Report.

What about the flight being packed?

While federal agencies in the United States have issued recommendations for air travel during the pandemic, and the International Air Transport Association, the airlines’ trade association, also released guidelines, there is no new legislation over any health and safety measures in the sky.

Instead, airlines have taken to instituting their own distancing and disinfection protocols, which can differ widely. Delta Air Lines is blocking the middle seats and enacting capacity limits for the time being: 50 percent for first class and 70 percent for the main cabin. Others, like United Airlines and American Airlines, are going Allegiant’s route: allowing passengers to opt-in for alerts, then change their tickets when their flights start to fill.

The reason you weren’t notified is because your original flight was below the 65 percent-full benchmark that Allegiant set in March. When the Orlando flight was combined with the Flint flight, the overall number of passengers increased.

Like hotels and other travel companies, airlines have all come forward in recent months with complex new cleaning programs; also like hotels and other travel companies, there have been no enforcement measures or oversight from federal agencies. Allegiant, like other airlines, uses electrostatic sprays, hospital-grade disinfectants and filtration that changes out the cabin air every three minutes.

The airline spokeswoman checked the flight log and found that the cabin was, in fact, cleaned in Flint. But the fact that you didn’t see it tugs at an enormous issue in travel right now: consumer confidence. Before Covid-19, few passengers would have questioned why they didn’t see a tray-table being wiped down. The more that’s out in the open, the better — and the safer we’ll all feel in the sky.

So, bottom line: Can you get a refund?

The pandemic has placed extraordinary stress on air travel, and considerable gaps have arisen between airlines’ stated policies and the on-the-ground application of those policies. (Look no further than this spring’s mask controversy.)

Allegiant ostensibly allows passengers to opt out of split flights — and change their tickets when planes are uncomfortably full — when they speak up before departure. But as your experience suggests, the passengers on your flight were not given adequate time to make a decision — never mind voice it — before the cabin door closed. I pointed this out to the Allegiant spokeswoman and regret to report that the airline is unwilling to offer any further restitution, beyond the reimbursed seat and baggage fees.

Sarah Firshein is a Brooklyn-based writer. If you need advice about a best-laid travel plan that went awry, send an email to [email protected].

Discover more Travel coverage by following us on Twitter and Facebook. And sign up for our Travel Dispatch newsletter: Each week you’ll receive tips on traveling smarter, stories on hot destinations and access to photos from all over the world.