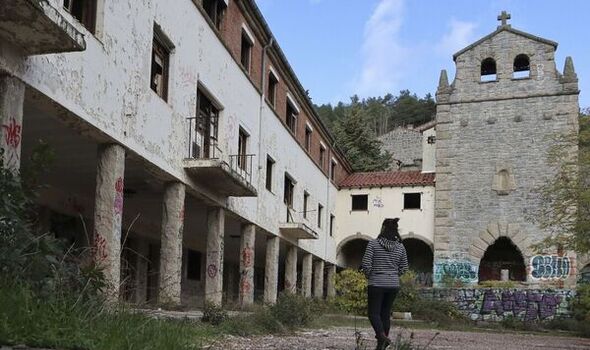 Salto de Castro, a village in north-western Spain, is now on sale for the bargain price of £227,000. The abandoned village includes 44 houses, a hotel, a church and a swimming pool.

Over 65,000 square feet, Salto de Castro is in the province of Zamora, near the border with Portugal.

The mysterious village has no inhabitants and has been left abandoned for over three decades.

The village’s current owner purchased it in 2000 and intended to turn it into a tourist attraction.

However, they struggled during the eurozone crisis and never finished their plans to turn it into a holiday resort.

The owner, now in his 80s, is selling the village so his plans can be realised by a new owner.

Ronnie Rodriguez, who works at Royal Invest, the company representing the owner, told BBC News: “The owner had the dream of having a hotel here but it was all put on hold.
“He would still like the project to come true.”

The owner said on the listing: “I am selling because I am an urban dweller and cannot maintain the upkeep.”

The listing on Idealista has received more than 50,000 views and interest from more than 300 parties.

Interest has been shown by potential buyers from Britain, France, Belgium and Russia according to reports.

Mr Rodriguez said that one person had already been tempted to put down a reserve on the property.

The new owner would also take over a bar, a school with several classrooms, a barracks and sports grounds.

The owner has previously tried to sell the village for around £5.6million but didn’t find a buyer.

Several of the buildings have been vandalised since the village was abandoned which is thought to have affected the price.

However, potential buyers would likely need to spend a lot more than the asking price to renovate the village.

Salto de Castro was originally built by an electricity generation company to house workers at the nearby reservoir.

After the reservoir was completed, many of the workers moved away from the village and by the 1980s it was abandoned.

The area surrounding the village is known as ‘emptied Spain’ due to its sparse population and lack of services.

The asking price would only buy someone a one-bedroom apartment in the more popular areas of Madrid and Barcelona.

Spain remains one of the top destinations for British expats with many moving to experience warmer weather.

However, the village’s new owner would face a colder climate as Spain’s northern regions don’t enjoy the temperatures of the south.

Zamora province is known for its Cathedral which has a Byzantine dome, Romanesque Tower and neoclassical cloister.

The region isn’t especially popular with British expats who tend to favour the coastal regions around the Costa del Sol and the Costa Blanca.