At the onset of the coronavirus pandemic, with travel restrictions in place worldwide, we launched a new series — The World Through a Lens — in which photojournalists help transport you, virtually, to some of our planet’s most beautiful and intriguing places. This week, Trishna Mohanty shares a collection of images from Imphal, the capital city of Manipur.

Barely five feet tall and hunched over, Anjana Devi, who is in her 80s, bellows instructions at two men as they unload crates of fruits from a mini truck. All around her, hundreds of women — most of whom are over 60 — mirror her actions. Farm-fresh produce surrounds them. The air is full of heady aromas: incense and fermented fish, jasmine buds and pungent spices.

Every shopkeeper in sight is a woman. Collectively, around 5,000 of them here in the Indian state of Manipur constitute one of the largest markets run solely by women in all of Asia. 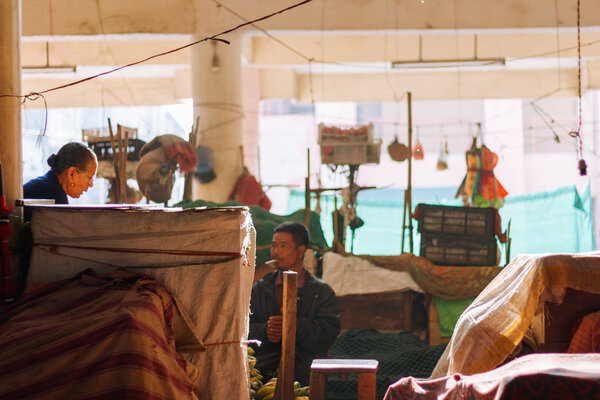 Tucked away in a corner of northeast India, Manipur was once a sovereign state called the Kangleipak Kingdom. The valley was inhabited by various ethnic groups, and while patriarchy underlined their traditional norms and social structures, women were not confined to traditional roles.

The kingdom was often at war with its hostile neighbors, and, to keep them at bay, able-bodied men served the monarchy. In their absence, women took care of both households and trade. Around 1580, the monarch established an exclusive trading center for women called Nupi Keithel, or Women’s Market, in Imphal, what is now the capital of Manipur.

Under royal patronage, the traders grew in numbers and the market flourished. It became a conduit for social and political discourse, and women, emboldened by their new roles as drivers of the economy, began asserting themselves in new ways.

One such instance occurred in 1904, when traders from Nupi Keithel protested the colonial administration’s use of forced labor. Other Manipuri women joined the movement and stirred public outrage with several demonstrations. Eventually, the forced-labor policies were revoked.

This was the first Nupi Lan, or women’s war, a crucial milestone marking the political awakening of the people of Manipur led by women traders of Nupi Keithel. In 1939, the market spearheaded a second Nupi Lan against the King of Manipur. In the wake of both movements, the market emerged as the dominant voice of resistance against oppression and injustice — and the women emerged as the sentinels of a more equitable Manipuri society.

Born and raised in India, I learned at an early age that deep-seated patriarchal and misogynistic values can work to silence women’s voices. The act of speaking up demanded courage, and I saw an extraordinary example of it firsthand in 2004, when a dozen middle-aged women staged a protest over the death of Thangjam Manorama, a young woman who was taken into custody by soldiers and later found murdered, her mutilated body showing signs of sexual assault and torture.

The Manipuri protesters stood naked, holding banners that said, “Indian Army Rape Us” and “Indian Army Take Our Flesh.” They took aim at the Armed Forces Special Powers Act, which had granted extraordinary powers to the Indian Armed Forces to maintain law and order, and which had led to incidents of extrajudicial executions and brutality against women. While the women’s demand to repeal the act was denied, paramilitary forces vacated their headquarters at the Kangla Palace in Imphal, where the protest had taken place.

And so, at the age of 16, I found my heroes in a group of disenfranchised women using their voices and bodies as an instrument of change in a conservative society. Ever since, I have been trying to understand how women living in far-flung corners of this country, with little to no privilege, are asserting themselves in a culture that oppresses and subjugates them.

Several women traders of Nupi Keithel are vying for my attention. On a hot summer afternoon in March, I am their only customer. They call me beti, or daughter.

The vendors here are spread across three buildings and a massive open market. The shops are separated from each other by various goods. There is only enough space to display a small fraction of wares; the rest are bundled away in trunks and bedsheets that flank each seller as she sits cross-legged in her shop. Among the towers of surplus goods, I spot perfectly camouflaged placards with slogans like “We won’t stay silent” and “We demand justice.”

“We don’t speak the language of silence here,” says Laishram Mema Devi, who has sold handmade jewelry at the market for more than three decades. “It doesn’t matter who we are up against; if what they are doing is not in Manipur’s best interest, they will hear from us.”

Ema Mema makes about 12,000 Indian rupees per month, or about $160. (“Ema,” or mother, is a term used by the people of Manipur to address elderly women; in fact, there are so many elderly women in the market that locals refer to it as Ema Keithel, or Mother’s Market.) “It may sound like a small amount,” she tells me, “but it helped me raise three daughters.”

Walking around Nupi Keithel, I meet H.I.V. patients and other social outcasts who have found refuge here in the market. With the support of the community, they have been able to start their own businesses.

Camaraderie and collective strength thrive in the winding lanes of Nupi Keithel. But the market’s legacy has long since extended beyond its threshold. Manipur’s past bears the distinct imprint of it, and so, too, will its future.