At the onset of the coronavirus pandemic, with travel restrictions in place worldwide, we launched a new series — The World Through a Lens — in which photojournalists help transport you, virtually, to some of our planet’s most beautiful and intriguing places. This week, Mónica R. Goya shares a collection of images from northwest Spain.

Asturias, a region in northwest Spain that’s separated from the Castilian Plateau by the Cantabrian Mountains, is a land of contrasts. Once an industrial and mining powerhouse, the area has earned its nickname, Natural Paradise; a third of its territory is now environmentally protected.

This year I had the chance to spend over two months there. It was a unique opportunity to rediscover my homeland after a decade spent living abroad. Asturias boasts a range of forests — oak, beech, chestnut, birch — and a mostly unspoiled coastline. Its beaches come in all sizes: a palette of turquoise blue waters surrounded by imposing cliffs and green pastures. 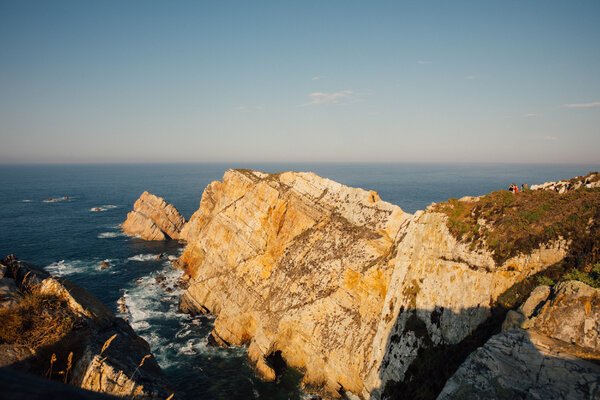 Traces of the region’s pastoral heritage are still visible. On a hike through chestnut woods, I spotted a corripa, a circular stone enclosure built near a tree to store its chestnuts in their burrs, a way of prolonging their shelf life.

The region is also dotted with hórreos, ancient wooden granaries built on stilts, and protected by heritage status since the 1970s.

And since tending the land is rooted in the soul of many locals, you’re never far from a bursting vegetable garden.

Asturias is home to just over a million people, half of whom live along the region’s midline, where its main three towns are: Oviedo, the capital city, which showcases immaculately preserved pre-Romanesque architecture, and the harbor towns of Gijón and Avilés.

Somiedo, one of Asturias’ seven UNESCO biosphere reserves, is as far as it gets from the sun-drenched Spain of most people’s imagination. There, I was moved by the timeless beauty of the teitos, little thatched roof huts scattered across the emerald valleys. Often associated with the pre-Roman settlements known as castros, these traditional buildings are an important part of the culture of the Vaqueiros de Alzada, a nomadic people who practiced a transhumant lifestyle and who used to stay in the teitos while moving their cattle to the high mountain grazing pastures in the summer. Today there is an emerging movement to prevent this cultural heritage from vanishing.

Western Asturias, where Cantabrian brown bears roam free, is considered the cradle of rural tourism in Spain. (The bears’ presence is on the rise, a result of conservation efforts.) There, castros abound and stone houses with slate roofs are the norm. Ancient oak forests — such as Muniellos, the largest in Spain and one of the best preserved in Europe — as well as beech and birch woods are at their prettiest in autumn, when the deciduous trees put on a show.

Across Spain, many areas that are partially uninhabited because of a rural exodus come back to life in the summer. On the way to my grandmother’s village, I took the slower route, visiting the charming fishing villages of Llastres, Cudillero and Luarca. I took time to reflect on the many rural Spaniards who emigrated to the Americas over a century ago — and to reflect on the legacy of the indianos, the few who made fortunes abroad and returned to their hometowns to build grandiose mansions and, sometimes, schools, thereby helping to reduce the widespread illiteracy among the rural classes into which they were born.

Picos de Europa, created in 1918, is the only national park in Asturias. Its exquisite natural beauty cannot be understood apart from the shepherds who for centuries have shaped the park’s landscapes, tending their livestock and producing award-winning cheeses such as Cabrales and Gamonéu, still aged in difficult-to-access caves.

Around 80 percent of all Spanish cider is produced in Asturias, and sidrerías, or cider houses, are a staple in society. Local customs call for natural cider — which is traditionally poured into a wide-mouth glass from high above — to be drunk quickly, in one go. The local cuisine is hearty, the portions abundant and locals’ gluttonous reputation not unfounded.

Despite the never-ending engineering works to link Asturias with Madrid by high-speed rail (a project scheduled to be completed by 2010 and still underway), visitor numbers are increasing annually. Last year, a record 2.3 million visited Asturias, 82 percent of them Spanish nationals.

And yet, in August, Asturias is a green oasis where I can blissfully find trails to walk in silence for hours without encountering another soul.