“I guess sports are not the invincible sheath of American culture that we thought it was,” he said.

It was Thursday afternoon. There were more televisions than customers, and a sense that the ratio might remain that way for weeks, at least.

The televisions were muted, and you could hear a foghorn from the bay now and again, burping through the rectangle of daylight at the front door.

Most televisions vacillated between talking heads and screenshots of league statements regarding the closures. The N.H.L. and Major League Baseball had joined the N.B.A. in suspending operations indefinitely. The N.C.A.A. had just called off its basketball tournaments. Sport by sport was shutting down.

The other televisions showed golf, the Players Championship tournament. There were fans cheering at the famous 17th hole, and you had to ask if the scene was live, because it already felt from a different era. Soon enough, golf shut down, too. Another sporting domino toppled. 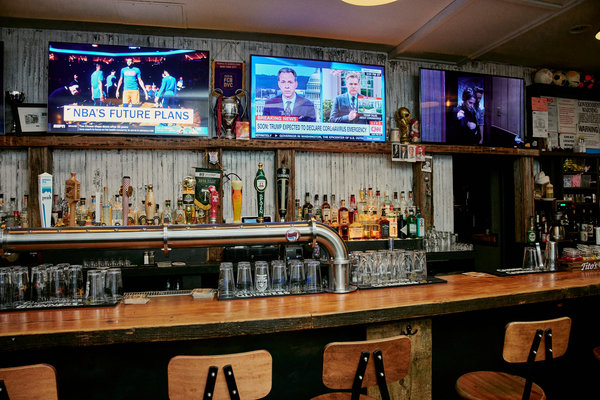 Experienced in bartending patter, Prien reminded the three of us on the stools that there are only two recession-proof businesses: bars and crematories.

“We’ll take ‘sports’ off the sign out front and just be the ‘Final Final Bar,’” he joked.

But these are serious times, even without the fear of becoming sick. Whole industries rely on sports. Forget the professional athletes or the leisure-seeking schlubs who root for them.

Consider the people in between — the arena workers and vendors, the ushers and parking attendants, the people holding cameras and running wire, the back-office team employees, the businesses that huddle in the shadows of the stadiums.

The place was open that October day in 1989, when an earthquake hit just before a World Series game between the San Francisco Giants and Oakland A’s, and the place stayed open as the Marina District outside the doors burned. It was open after 9/11, when sports went on a dutiful hiatus, then came back repurposed as a show of resilience and community.

And it will stay open now, maybe staffed less than expected during the madness of March. The popcorn machine in the corner — you have to try the popcorn, said a guy who has been hanging around the place for 20 years, because it’s legendary, like the popcorn at the best movie theaters — will sit idle.

You don’t want to infect people with coronavirus through popcorn.

“Why don’t you just move the machine behind the bar and hand it out?” the man asked Prien.

Prien explained that his father figured the empty machine in the corner would serve as a sign that times were different. There will be no popcorn if there are no sports.

The conversation struck optimistic, nostalgic chords. Maybe the networks will show classic games to fill airtime, or some of those old World’s Strongest Man competitions, the way cable did years ago.

Sure, sports are gone, but they will be back.

Won’t they? This is just a hiccup, right?

But now that they have stopped play, sports will have to figure out how to start again. Most N.B.A. teams have 17 or 18 games left in the regular season.

“Just go straight to the playoffs,” a man said.

“You have to put an asterisk on that trophy then?” Prien asked.

The man pondered the question.

“Just give the trophy to the Lakers,” he said.

“I think Giannis would have something to say about that,” Prien said, standing up for the Milwaukee Bucks and their superstar.

The pool game ended, the players left, and the cue ball took its place behind the bar. One of the two men at the bar settled up and left. Prien got a rag and began wiping surfaces, maybe as he always has.

“This is going to show us what a world without sports means,” he said.

A foghorn belched. The shape of light from the doorway had shifted with the sinking sun. San Francisco public schools announced that they were closing for a couple of weeks, at least. Every hour, it seemed, brought ominous news of rising casualties, falling markets and a world closing in on itself.

The N.B.A. and college basketball, baseball and the N.H.L., those are spectator sports for most of us. But now the high schools are shutting down, and probably the youth teams and the recreation centers. More than viewing habits are upended. Will people avoid the gyms, the courts, the fields, the trails?

Not far away, the tennis courts and softball fields outside Moscone Recreation Center were empty. Some children were on the playground, some dogs and their owners at the dog park. One man shot baskets.

Are there usually more people on a Thursday afternoon in March? You wouldn’t notice anything different unless you looked for it.

Where is the finish line?

Fog rolled in through the Golden Gate. Tourists — not as many as usual, or maybe it was the same — walked across the famous bridge and took pictures. There were boats on the water, right above where that quarantined cruise ship had sailed toward Oakland a few days before.

The conversation from the Final Final lingered. That is a good question: Just how do you start the games again?

How slowly must the infection spread, the body count rise, before someone signals the all clear? Who makes the call?

What if the big leagues resume and another player or coach tests positive for coronavirus? Does the whole apparatus shut down again?

My daughter, a freshman, left the house on Friday morning with her lacrosse gear. For the moment, practice after school was still on. The world felt normal, if only for a flash.

My son, a senior, stuffed his track uniform into his backpack, even though there was no meet. Team pictures were to be taken.

I dropped him off at school, and reminded him just before the car door slammed to get everything out of his locker in case he could not get back into school for a few weeks. He disappeared into the crowd. Three boys raised the American flag out front.

Team pictures, I thought. Glad they are doing them now, before it is too late, for a season — a time — that may not return.