BALTIMORE — Last year, Swiss Skydiver became the sixth filly to win the Preakness Stakes, which was held in October because of the coronavirus pandemic, but the 146th running of the race on Saturday will be blanketed with even more intrigue.

Medina Spirit, who won the Kentucky Derby on May 1 to give the trainer Bob Baffert a record seventh victory in the race, was installed as the 9-5 morning-line favorite, after nearly being excluded from the race when it was disclosed that he had failed a drug test after the Derby.

Medina Spirit tested positive for betamethasone, a corticosteroid, but officials in Kentucky are awaiting results from a second sample — a process that could take weeks — to determine if his Derby victory will be overturned. It sets up an awkward situation if Medina Spirit were to win the second leg of the Triple Crown.

Preakness organizers decided on Tuesday that Medina Spirit could run after Baffert and his lawyer agreed to expanded testing and monitoring of all of Baffert’s horses racing at Pimlico Race Course over the weekend. Baffert, saying he did not want to be a distraction, will remain in California and let his longtime assistant Jimmy Barnes saddle his horses.

Coverage of the Preakness will begin Saturday at 2 p.m. Eastern time on NBC Sports Network and will continue on NBC at 5 p.m. Post time is 6:47 p.m. Here’s what else you need to know about the 146th running of the race, which will have a field of 10: 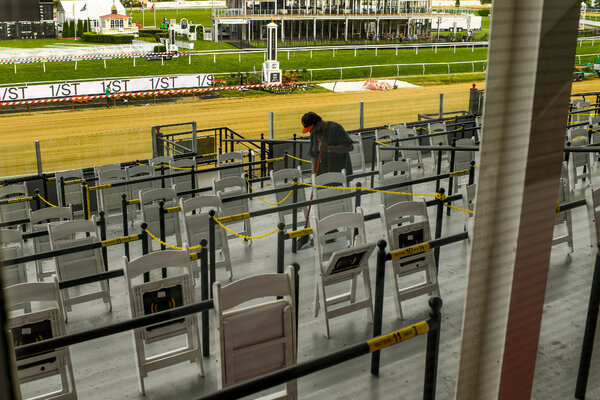 The pandemic wreaked havoc on the Triple Crown schedule in 2020. The Belmont Stakes, normally the final leg of the Triple Crown, was held in New York in June, the Derby in September, and the Preakness, usually the second of the three races, came in October. None of them admitted spectators. This year, all have returned to their regular spots on the calendar.

Attendance for the Preakness will be capped at 10,000 fans, a figure that includes those in the normally raucous infield. That is a little less than 10 percent of the track’s usual capacity. (The announced crowd for the Kentucky Oaks at Churchill Downs on April 30 was 41,472, and for the Derby the next day it was 51,838, close to a third of the venue’s usual capacity.)

The Pimlico grounds will be divided into distinct spectator sections, and no crossover will be allowed. Temperature checks and questionnaires to assess coronavirus exposure will be administered at the gates, and social distancing signage, plexiglass barriers and hand sanitizing stations will be placed around the track. Masks will be required when not eating and drinking, and “Covid compliance officers” will remind guests to adhere to the policies.

We know Medina Spirit, but what about Baffert’s other horse?

The world knows about Medina Spirit by now: the gritty Derby victory, the failed drug test and a long wait to see if the colt would be disqualified. But what about Baffert’s other horse in the Preakness?

Concert Tour was undefeated in three races heading into the Arkansas Derby on April 10. But after he finished a distant third in that race, Baffert decided to have him skip the Derby and focus on the Preakness. The Hall of Famer Mike Smith, who has won the Preakness twice, picks up the mount.

Barnes, the Baffert assistant who is in Baltimore, said he was pleased with Concert Tour’s progress.

“He was a little on the light side after the Arkansas Derby, and Bob and Gary West opted to pass on the Derby and run a fresh horse in the Preakness,” Barnes said of the colt’s owners. “We’ve basically seen everything you’d want to see. No hiccups at all. His coat is beautiful. He’s eating well. He should be ready for Saturday.”

The Derby controversy aside, a victory from either Medina Spirit or Concert Tour would give Baffert a record eight victories in the Preakness. He is currently tied with Robert Wyndham Walden, who saddled seven Preakness winners between 1875 and 1888.

If Smith, 55, wins aboard Concert Tour, he will break his own record (set at age 52 in 2018 aboard Justify) as the oldest jockey to win the race. John Velazquez, Medina Spirit’s rider, is 49.

Then there are the other Derby horses …

Besides Medina Spirit, two other Derby horses — Midnight Bourbon and Keepmeinmind — are racing in the Preakness. In the last 20 years, horses coming from the Derby have won the Preakness 16 times.

Midnight Bourbon, who got crushed coming out the gate and ran wide around both turns to finish sixth in the Derby, has finished in the top three in seven of eight starts. Also working in the colt’s favor: Smith was replaced with the hottest rider in North America, Irad Ortiz Jr.

The trainer Steve Asmussen, who has won the Preakness twice, said Midnight Bourbon had moved “over the racetrack beautifully” since arriving at Pimlico.

The Derby’s seventh-place finisher, Keepmeinmind, is here, too. His trainer, Robertino Diodoro, has entered the Preakness for the first time. So has the colt’s rider, David Cohen, who believes Keepmeinmind’s Derby performance was a springboard to something bigger.

“We were extremely happy with his performance in the Derby,” Cohen said. “I think he finally got back to his 2-year-old form as far as relaxing early on and coming and finishing up with a nice, strong finish that we know he likes to do.”

… and some fresh contenders.

Brown, who won his first Preakness in 2017 with Cloud Computing, has entered the two lightly raced but talented colts in hopes of winning his second. Like Cloud Computing, both are owned by Klaravich Stables.

Risk Taking, who has won two of five career starts, does his best running late. He finished a disappointing seventh in the Wood Memorial in April after going off as the 2-1 favorite. Crowded Trade ran third in the Wood.

“Crowded Trade ran a really good race in only his third start,” Brown said. “He did hang a little bit in the lane, but he made up a lot of ground after breaking bad. Risk Taking was quite a disappointment that day. He was coming into the race in excellent form, and his numbers were heading the right way. He just didn’t fire.”