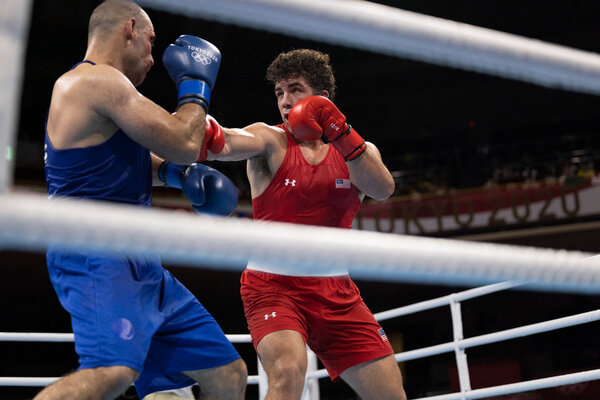 Here are some highlights of the U.S. broadcast schedule on Saturday evening and overnight. All times are Eastern and subject to network changes.

TRACK AND FIELD Replays of a flurry of finals begin airing at 8 p.m. on NBC. Events include the women’s high jump; the women’s 10,000 meters, with Sifan Hassan of the Netherlands pulling off an extraordinary feat; and the men’s javelin throw, which gave India its first track and field gold medal.

SOCCER Brazil beat Spain in extra time to repeat as the Olympic men’s soccer champion. The gold medal match gets a replay on CNBC at 8 p.m.

On the American team, players range in age from 24 to 34 and have a mix of experience. Only four of them have played at an Olympics, while eight of them are new to the Summer Games. They will reach for gold as the U.S. takes on Brazil on Sunday; the game airs live on USA at 12:30 a.m.

WATER POLO The U.S. women’s team grabbed its third consecutive Olympic gold medal in a 14-5 rout of Spain. You can watch the action in a replay at 9:30 p.m. on NBCSN.

RHYTHMIC GYMNASTICS Live coverage of the women’s group all-around finals is on USA at 10 p.m.

BASKETBALL Brittney Griner, Sue Bird and the rest of the U.S. women’s team will make their 11th appearance in a gold medal game on Saturday night when they take on Japan in the final. The game will be broadcast live at 10:30 p.m. on NBC.