Justin Williams is a professional American cyclist, a celebrated national champion and a standout for another reason he wishes were not so: He is one of the few Black racers in the sport.

Now, he is bent on changing that.

After setbacks and a long journey through professional cycling, Williams formed his own team of professional riders in Los Angeles in 2019 with his younger brother Cory. The team, called L39ION (pronounced legion), has 14 riders, including 10 professionals, who race the full gamut of events — criteriums, road, gravel and cross.

“L39ION doesn’t force riders to conform to white norms,” or the expectations of what professional cyclists should look, act, or sound like, Williams said. He brought old rivals, former teammates and friends together to form the Los Angeles-based team, a roster that includes Black, Latino, Pacific Islander and white cyclists. “We wanted to win races while making the sport inclusive.”

This month, L39ION announced plans to form a squad that will compete in one of three tiers of racing overseen by the U.C.I., the governing body of cycling.

Williams said he aims to bring diversity to a sport in which few Black riders have cracked through. He is leading a new generation of bike racing that’s a far cry from the long tenured traditions of the Tour de France, circuits that have historically been filled with predominantly white, European athletes.

“I’ve been fighting all my life, why would I stop now?” said Williams, 31.

As one of the most successful riders in the country, Williams focuses on criteriums, or crits, which are short road races often looping around a city or neighborhood.

Getting to where he is today wasn’t easy. Williams charted a winding career path, one in which he repeatedly refused to conform to the mores in professional cycling. 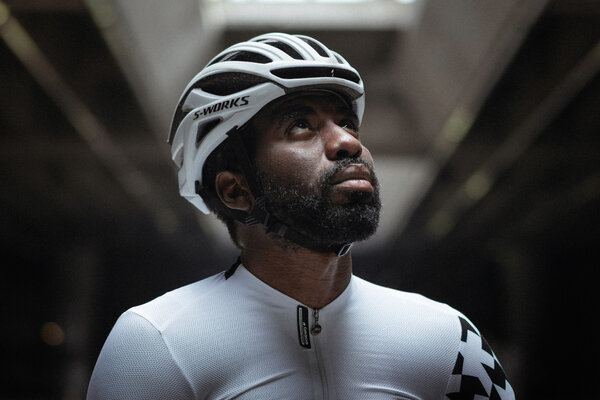 Williams, who is from South Los Angeles, got his first bike when he was 13, learning to ride from his father, Calman, an amateur racer. Biking was one of his few escapes from a rough neighborhood.

“I remember it being unpredictable. A lot of gang members in the community and kids selling drugs on the street,” Williams said. “Other than our time riding bikes, my parents kept us inside, focused on studying. They didn’t trust us to go out, which feels justified now. You could easily be caught in the wrong place and end up dead or in jail. I remember bullet holes in our street sign. I don’t know what I would have done without a bike.”

Near the end of high school, Williams’ cycling career started to take form. He focused on road racing, eyeing iconic European stage races with a dream of becoming the next Lance Armstrong. “But it was different for me,” he said.

“I was isolated, didn’t have support, and everything felt foreign,” Williams said. “Trying to develop as a young man and an athlete was impossible. It was so far from how I grew up.”

The numbers are stark. Only five of the 743 riders on cycling’s elite World Tour are Black. None of the 113 professional riders licensed by U.S.A. Cycling are Black. (In 2020, L39ION was not licensed by U.S.A. Cycling.) This year, there was one lone Black athlete, the French cyclist Kévin Reza, out of 176 riders on the start line of the Tour de France.

Williams got his start as an amateur at local crits, and in 2006, won the Junior Track National Championship.

Despite his promise in the closed circuit race scene, Williams continued to dabble in a mix of disciplines from time trials to multiday stage races, an anomaly for most riders who tend to specialize in one event.

With his race results improving, Williams moved to Europe in 2009, following the template for talented, young riders who dream of being the next great American cyclist. But even with moderate success, Williams frequently felt ostracized. “In Europe I was called ‘difficult,’” Williams said. “They called me a charity case and stereotyped me as an angry Black man.”

“I was written off faster than other riders and watched a lot of guys get on teams that never won a race. As a Black man from the ’hood, I was typecast before managers even got to know me,” he continued.

Williams returned to the U.S. in 2010 after spending a year abroad, putting his cycling ambitions on the back burner to study graphic design at Moorpark College near Los Angeles. He would race again when he was ready, he figured.

When that day came in 2016, he exploded back on the scene as part of the Cylance Pro Cycling team, winning 15 races at the highest echelon of the sport in both road races and crits.

Despite his meteoric rise, Williams found himself frustrated with contracts that paid a minimum wage and did not allow for him to have any real say in his race calender or roles within the team. “I wanted a voice that wasn’t moderated,” he said. Without a predictable salary, he gambled on his own training, hoping it would pay off in prize money. He went on to win back-to-back national championships in 2018 and 2019, a feat that few have accomplished.

Williams believes the lack of diversity in cycling, and inaction, starts at the top, with team managers, race organizers, and cycling power brokers at the wheel. “Not one has spoken up about the racial justice movement because they don’t have to,” Williams said.

With L39ION serving as a bellwether, that may be beginning to change.

In April, Saint Augustine University became the first historically Black college to add a cycling team. The EF Pro Cycling team, a Colorado based team known for their pink jerseys and sustained success on the World Tour, recently started two cycling programs at H.B.C.U. and Tribal Colleges and Universities with support from Cannondale and U.S.A. Cycling.

“We took a hard look in the mirror and asked ourselves what type of role we would play in making change,” said Dennis Kim, global vice president for marketing at Cannondale, referring to the wave of social action spurred by the killing of George Floyd.

“We looked at everything from supporting youth teams to feeder teams to the World Tour, but after conversations with EF and U.S.A. Cycling, we decided working with H.B.C.U.s would create more impact. It would be amazing if this program one day created an Olympic champion, but a better sign of success is a graduate of the program returning to their community and starting their own team.”

On a similar timeline, two organizations have sprung up in the wake of social justice protests around the world. Bike Rides for Black Lives organizes mass rides around the country and Ride for Racial Justice creates access to cycling resources and education.

“We want everyone to feel safe on a bicycle. The fact of the matter is, that many don’t” said Massimo Alpian, a board member of Ride for Racial Justice. “Change only happens if we work grass roots with communities and top-down with brands and local governments. To make cycling more inclusive we must change social norms, offer education, and create more representation.”

The movements echo the work Williams has led with L39ION. The team has a partnership with Outride, a nonprofit that aims to get children on bikes through school programs and supports young cyclists who can’t afford travel costs or entrance fees to races around the country.

But there’s more to be done, Williams said. “As a kid, cycling freed me from so many things. It connected me with people from all walks of life and helped me grow,” he said.

“In terms of impact, we’re not making nearly enough, honestly. We’re not reaching the level we want yet.”