Serena Williams leaned back in her chair and thought.

The seven-time Wimbledon champion had just been asked about the one thing she is looking forward to upon returning to Wimbledon for the first time since the coronavirus shut it down last year. Suddenly, Williams burst forward, as if she had just had an epiphany.

“I love the grass,” Williams said this month at the French Open, though she also admitted that she hadn’t even practiced on the surface since she lost to Simona Halep in the 2019 final. “What I love most about it is just the cleanness of it. I just think it’s so chic and so crisp. That’s a good word: crisp.”

Crisp may be the perfect word to describe the aura of Wimbledon. Those iridescent green grass courts are immaculately manicured. It is the only professional tournament that still requires its participants to wear logo-less, all-white clothing. The facilities, including a Royal Box that features signature purple-and-green blankets, oozes decorum.

And it’s not just Williams who understands the significance of the only major still played on grass. 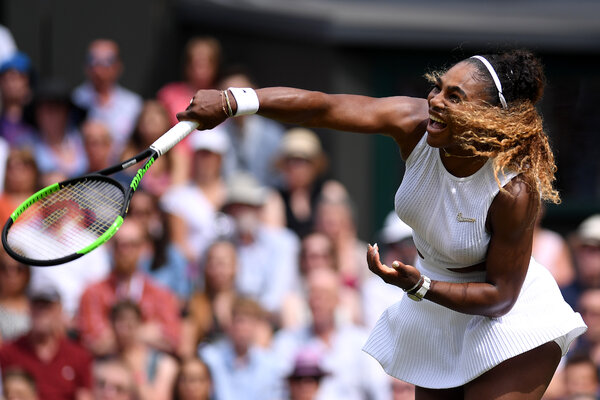 “Wimbledon is something magical,” said Elina Svitolina, a semifinalist in 2019. “We know the rules are quite strict, and it’s going to be even more strict this year. But you’re just in white, and you’re in such a nice, historical venue, so the whole atmosphere makes stepping on the court an experience.”

Now Wimbledon, which begins on Monday, is back, though it looks and feels quite different this year. Attendance is capped at 50 percent for the Centre and No. 1 Courts, while smaller show courts can seat 75 percent of capacity. For the semifinals and finals, seating capacity is expected to rise to 100 percent on Centre Court.

There are also strict regulations regarding vaccination and testing protocols. All ticket-holders are required to show proof of Covid status upon entry, either in the form of two vaccination doses or proof of a negative Covid test within the past 48 hours. While moving around the grounds, all attendees must wear face coverings, though they are free to remove them while at their seats. The players have their own set of rules in place that allow them to be exempt from public quarantine requirements while also keeping themselves and the public safe.

“This will be a Wimbledon like we’ve never known it before,” said Dan Evans, the British No. 1 in singles. “It’s obviously an amazing place to play tennis, but my overriding feeling is that it will be very different to what we know.”

Because tickets are being distributed through mobile devices this year, some traditions have disappeared. No one will be permitted to camp out for spare tickets, for example. Because the players are required to stay at a designated hotel in London, spotting celebrities outside their rental homes in Wimbledon Village is gone. And for environmental reasons, the plastic cups adorned with pictures of strawberries for the traditional Wimbledon dessert strawberries and cream have been replaced with sustainable cardboard containers.

As with other major championships this year, prize money has been redistributed, with more going to early round losers. This year, the men’s and women’s singles champions will receive £1.7 million (about $2 million), down from £2.35 million in 2019, but those who fall in the first round will get £48,000, significantly more than than two years ago.

Other changes include players on all of the courts, not just the premier ones, being allowed to challenge the calls of linespeople and have them verified by Hawk-Eye Live, a device that uses 10 cameras around the court (though no linespeople have been cut as a result, as other tournaments have done). And there also has been the introduction of a serve clock on all courts.

Seedings are according to the WTA and Association of Tennis Professionals rankings, which means that the champions, Roger Federer and Williams, both now ranked No. 8, could meet the top seeds Novak Djokovic and Ashleigh Barty in the quarterfinals. In the past, Wimbledon has often deferred to past champions when making seedings.

Simply adjusting to playing on grass — with its hard-to-grip surface and uneven bounces — will be a challenge for players, many of whom have not competed on the surface in two years: When Wimbledon was canceled last year, the few grass-court warm-up events were as well. This year, because the French Open was postponed by a week to allow for the lifting of more Covid-19 restrictions in France, there has been even less time to for players to make the transition.

“Nobody practiced on grass because there was no reason to,” said Daniil Medvedev, who is seeded second. “It’s not going to be easy this year.”

For most players, nothing is certain this year. Barty enters the tournament still nursing a hip injury that caused her to retire during her second match at the French Open. Halep, the defending champion, didn’t play that tournament because of a calf injury. She withdrew from Wimbledon on Friday. Dominic Thiem, the reigning United States Open champion, also withdrew, because of a wrist injury sustained earlier in the week.

Naomi Osaka, the world’s No. 2 player, also withdrew from the tournament, citing a need for more time away from the game. She also pulled out of the French Open citing mental health issues. And Williams, still one shy of tying Margaret Court’s record of 24 major singles championships, has played a sparse schedule this year. She reached the semifinals at the Australian Open in February, losing to Osaka, the eventual champion.

Barbora Krejcikova, the winner at the French Open, has never played the main draw at Wimbledon, but she is seeded at No. 15.

When Rafael Nadal announced that he was pulling out of Wimbledon and the Olympics following a semifinal loss to Djokovic at the French Open, the most intriguing story lines at Wimbledon suddenly became Federer and Djokovic.

Federer, an eight-time Wimbledon champion, has played just eight matches in the last two years and two weeks ago lost unexpectedly to Felix Auger-Aliassime at a grass-court warm-up in Halle, Germany.

Then there is Djokovic who, with his wins at the Australian and French Opens this year, is halfway to a Grand Slam. If he also wins a gold medal at the Olympics in Tokyo, he will accomplish the Golden Slam, which has been done only by Steffi Graf, in 1988.

“Everything is possible,” Djokovic said after he beat Alexander Zverev to win his second French Open. “I did put myself in a good position to go for the Golden Slam.”

Wimbledon is already thinking ahead. In 2022, the All England Club, which holds the tournament, will add play on the middle Sunday of the event, which traditionally was reserved for rest and rejuvenation of the courts and the players. The All England Club also recently unveiled plans to expand into neighboring parkland and create an 8,000-seat show court that the club expects to be ready by 2030.

But for this year, people who treasure the tournament are relieved it’s back.

“Wimbledon is such an anchor for all of us,” said Jim Courier, a former world No. 1 and current Tennis Channel commentator. “I think it will be rejuvenating for the sport as a whole. It’s going to be a relief that Wimbledon is back and going to be visible again.

“Wimbledon,” Courier added, “is that perfect blend of the old and the new. They’ve gotten it right in so many ways. We missed it.”