The first time Seimone Augustus realized what she was capable of wasn’t when, as a 14-year-old, she landed on the cover of Sports Illustrated for Women next to the question, “Is She the Next Michael Jordan?”

When Augustus, a W.N.B.A. legend who retired this year after 15 seasons, reflects on the moments that made her understand her potential, she thinks of the stands at Capitol High School in Baton Rouge, La. She led the team to back-to-back state titles, scoring 3,600 points and losing just seven games in four years.

The school is at the center of the predominantly Black neighborhood where she grew up, a neighborhood she described as close-knit and full of “a bunch of people that you would never know who helped make my game the way it is.” With each win, though, the crowds that gathered to see Augustus play at the Capitol gymnasium started to look different.

“The same white folks who, had we seen them driving down the street a year ago, would have been hitting the locks with their elbows and zooming through were suddenly embracing coming to the gym, wanting to experience whatever it is that they experienced while watching me play,” Augustus said.

Only then did Augustus start to realize the kind of change her preternatural abilities on the court might enable her to push for off it. “I think it hit me then,” she said. “It was just a melting pot of people, the most beautiful scenery I’ve ever seen in my life.” 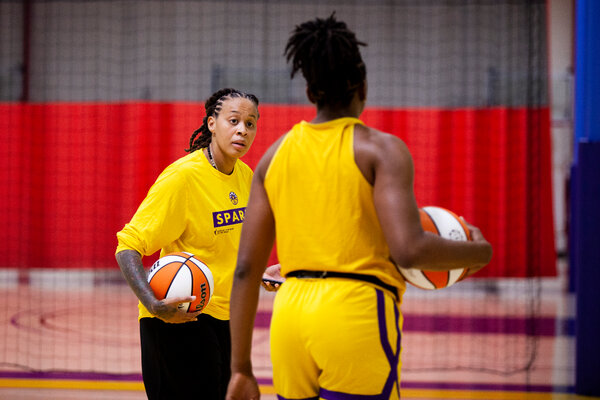 Augustus’s legacy as a player — a women’s basketball pioneer, a three-time Olympic gold medalist and the cornerstone of the four-time champion Minnesota Lynx, one of basketball’s great dynasties — isn’t in question. But she is also one of sports’ most forward-thinking and undersung activists. Now, as an assistant coach for the Los Angeles Sparks, Augustus is working to help her players find the same solace and freedom that she did on the court and find ways to use their influence to advocate for themselves and their communities outside basketball.

“How can I make this a safe space for you to just feel free and express yourself through basketball?” she asks them.

Basketball has long served as that kind of refuge for Augustus.

“Just being me was hard, to be honest,” she said, explaining that she was bullied in high school. “Every day walking down the hallway it was like: ‘She’s gay. She’s gay.’”

Augustus’s parents and family supported her, but others were hostile. “You had parents coming up to my parents and saying, ‘Because your daughter is gay, she’s got my daughter feeling like she’s gay,’” Augustus said. “People I’ve never met in my life are blaming me for something that their child is now choosing to express.”

At the same time, Augustus was racking up almost every accolade a high school basketball player could hope for — and trying to consider how the racist legacy of the Deep South community she grew up in would shape where she chose to play in college. Louisiana State University, her hometown school, did not employ a Black professor, Julian T. White, until 1971. “The whole recruiting process, I had so many people that were like, ‘Do not go there,’” she said.

Ultimately, she decided to attend L.S.U. anyway: She wanted the chance both to stay close to home and to build a winning program instead of joining an established powerhouse like Tennessee or Connecticut. “I had a lot of elderly Black people that said, ‘Just to step on this campus was a lot for me, and I did that for you,’” Augustus said. “I think it helped give them a release. Like, at least we’re at peace enough to be able to enjoy this moment.”

Those experiences laid the groundwork for Augustus’s transition to public-facing activism, which demanded self-assurance and sensitivity. Her first foray into advocacy was fittingly personal: She came out publicly in the L.G.B.T.Q. magazine The Advocate in May 2012, detailing her relationship with, and plans to marry, LaTaya Varner, who is now her wife.

Augustus’s profile had never been higher, given that she had just led the Lynx to their first title, in 2011, and had been named the most valuable player of that year’s finals. But the decision was still risky. It would be years before the W.N.B.A. started a leaguewide L.G.B.T.Q. pride program, in 2014, and the timing was crucial since Minnesotans would vote on a state constitutional amendment banning same-sex marriage that November.

“That was like the first time I actually stepped out and used my voice,” Augustus said. “I felt like I was at a place in my life where I was ready to be open with people. I don’t think it was a big surprise, but for the people that needed it, it really helped them. I had so many people that came over, like, ‘I was able to tell my mom after 40 years.’”

She continued to speak to the news media about the issue, telling her own story as a rebuke to the proposed Minnesota amendment. It was defeated, and same-sex marriage became legal in all 50 states soon after Augustus and Varner were married in 2015.

“When she came out in 2012 and then started doing so much intentional work in Minnesota around marriage equality, we saw Seimone and then other players within the W.N.B.A. kick off conversations that became really reminiscent of the athlete activism of the ’60s,” said Anne Lieberman, director of policy and programs at Athlete Ally.

Those conversations were never more influential than in 2016, when the stars of the Lynx — including Augustus — began to publicly support the Black Lives Matter movement. They spoke out against police brutality and wore shirts during warm-ups that bore the movement’s slogan in the wake of the police killings of Philando Castile and Alton Sterling before Colin Kaepernick, for the same cause, made waves by taking a knee during the national anthem at N.F.L. games.

For Augustus, both killings resonated deeply. She had spoken out about racial profiling by the police in suburban Minneapolis in 2012, where Castile was killed four years later; the corner store where Sterling was killed was the same one where she used to buy snacks when she was growing up in Baton Rouge.

The W.N.B.A. fined players for wearing the shirts, before rescinding the fines after player and public outcry. Four Lynx security guards, all off-duty police officers, walked out during a game in response to the players’ actions.

“​​We had cops walk out on us and leave the Target Center wide open for people to just — if they wanted to come in and do something to us, we didn’t have anyone there to protect us,” Augustus said. “Because we wore T-shirts. Because people don’t want to be held accountable for their actions.”

In the wake of George Floyd’s murder last year, the W.N.B.A. more proactively encouraged player activism as a part of its identity — four years after the Lynx first took a stand. “Now it’s like, ‘We’re celebrating you!’ And we’re like, ‘Uh huh, you’re celebrating now, but in years prior, it was kind of hard to get you to embrace it,’” Augustus said.

She still remembers meetings where the league, she said, tried to goad players into wearing more makeup and skimpier uniforms, and how in her first years of playing it was the players with husbands and children who seemed to get all the publicity. “They would say, ‘We don’t have a cool factor,’ and I’m like, ‘We cool, what are you talking about?’” Augustus said. “It’s insane the conversations we had to have.”

In an emailed statement in response to Augustus’s comments, Commissioner Cathy Engelbert cited the emphasis on L.G.B.T.Q.+ rights by the league’s Social Justice Council, which was established last season.

“The W.N.B.A. has long been one of the most inclusive and welcoming sports leagues in terms of its commitment to players and fans,” she said, adding, “Today, that commitment continues to grow with countless demonstrations of inclusivity and with an understanding that there will always be more work to do.”

Augustus has always prioritized the game itself, and that’s no different now that she’s a coach. But the seemingly effortless way in which she has integrated fighting for herself and her community into her basketball career seems likely to rub off on her protégés.

“She played the game with a flair and a confidence that would tell you that she wants to be the loudest person in the room, but she really doesn’t,” Sparks Coach Derek Fisher said. “She just wants to help people get better and serve others.”