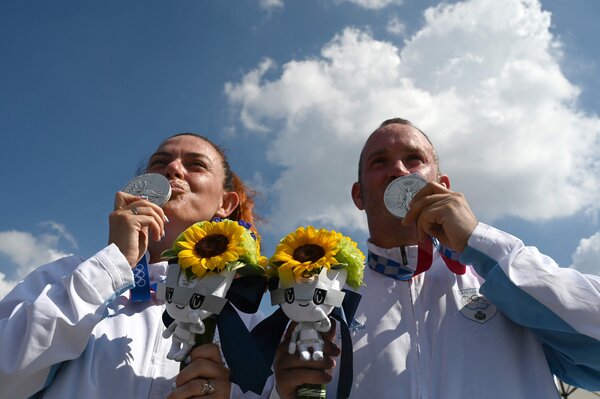 TOKYO — San Marino waited 61 years for its first Olympic medal, which came on Thursday. Then it waited two days for its next one.

San Marino is hardly an athletics powerhouse. Sports fans mostly know it for its forays into European soccer qualifiers, where it nearly always loses, often by scores like 9-0.

But now San Marino has a positive sporting distinction. With a population of roughly 30,000, it is the smallest country to win an Olympic medal, surpassing Bermuda (pop. 70,000).

San Marino first competed at the Olympics in 1960, when a group of nine athletes in cycling, shooting and wrestling placed no higher than 16th.

In 2012, it seemed as if the tiny land had finally struck silver or bronze. In the women’s trap shooting, Alessandra Perilli finished in a three-way tie for second. Alas, she lost in a shoot-off and therefore finished in the worst of all Olympic positions, fourth.

Perilli did not win a medal in 2016, but returned this year. On Thursday, she once again made the trap shooting final, but this time she hit enough targets for a bronze medal, the first for her nation.

“During the final, when the fifth shooter went out, I thought, I don’t want to be one more time in fourth place, so I have to make it,” she said. “This is the first medal for me and for my country. We are a small country but very proud.”

On Saturday, Perilli was joined by her countryman Gian Marco Berti for the first-ever mixed-gender trap shooting team competition. The duo went one better, earning a silver medal behind Spain.

Berti is a lawyer as well as a shooter. Asked about his colleagues’ likely reaction he replied, “Lawyers are jealous people so they will probably not say anything about it.”