Ron Perranoski, who was one of baseball’s leading relief pitchers of the 1960s, appearing in three World Series for the Los Angeles Dodgers, died on Friday at his home in Vero Beach, Fla. He was 84.

His death was confirmed by the Dodgers, who did not cite the cause.

Perranoski was the third former Dodger to die within a week, after outfielders Jay Johnstone, who played for Los Angeles in the 1980s, and Lou Johnson, known as Sweet Lou, who hit a home run in the Dodgers’ 2-0 Game 7 victory over the Minnesota Twins in the 1965 World Series.

The Dodgers of the early and mid-1960s are remembered chiefly for their future Hall of Fame pitchers Sandy Koufax and Don Drysdale. But Perranoski, a left-hander who relied on sinkers and curveballs, played a key role in backing them along with the rest of the starting staff.

“Very often people will talk about tiredness in pitchers, about mental tiredness,” Perranoski told Sports Illustrated in April 1964. “There should be no mental tiredness if your arm is awake.” He added: “I seem to like it better with a couple of guys on.”

The venerable Dodger broadcaster Vin Scully once said of him, “He had the blood pressure of an astronaut.”

Perranoski earned a save in Game 2 of the 1963 World Series against the Yankees when he got the last two outs, relieving Johnny Podres in the Dodgers’ 4-1 victory at Yankee Stadium on their way to a four-game sweep.

His memories of glimpsing one of baseball’s finest relief pitchers of his youth may have provided inspiration.

“Growing up in New Jersey and going to all those Yankee games as a kid, I had watched No. 11, Joe Page, jump up over the bullpen fence to come into the games,” Perranoski recalled in an interview with Bob Cairns for “Pen Men” (1992), an oral history of relief pitching. “I’d say, ‘Someday I’m going to do that.’ And I did.”

Perranoski also pitched for the Dodgers when they defeated the Twins in the 1965 World Series, then were swept by the Baltimore Orioles in 1966. 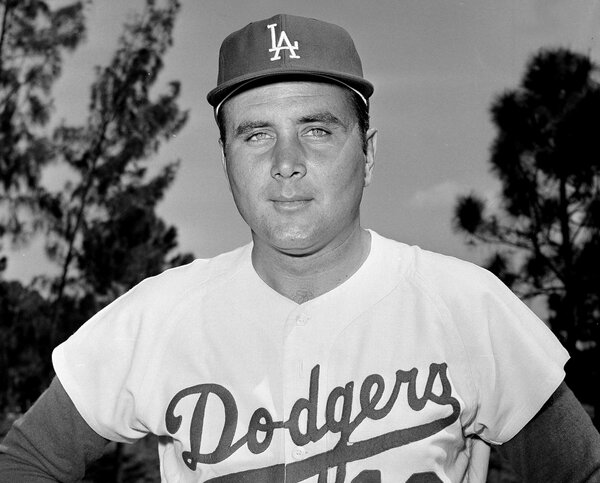 Ronald Peter Perranoski was born on April 1, 1936, in Paterson, N.J., and grew up in Fair Lawn. He pitched for a team that won a high school state baseball championship and then for Michigan State University, where he was a teammate of Dick Radatz, who became a prominent reliever in his own right, mostly with the Boston Red Sox.

Perranoski was signed by the Cubs in June 1958 and was pitching in their minor league system when he was traded to the Dodgers’ organization in April 1960 in a multiplayer deal that sent infielder (and future coach and manager) Don Zimmer to Chicago. He improved his curveball pitching with the Dodgers’ Montreal Royals farm team.

His survivors include his sons Ron, Brad and Michael; his sister, Pat Zailo; and four grandchildren.

Perranoski once told of a streak that Hank Aaron had run up against him, and the moment when he thought he had finally prevailed.

“At one time, he was eight for eight off of me,” Perranoski recalled in “Pen Men.” “I threw him a sinker and he finally dribbled one, a little roller to first base. On the way to first base to cover, I’m thinking it’s over. I finally got the son of a gun, and I pulled a hamstring muscle. He beat it out. Nine for nine!”