DUBLIN, OHIO — The leaderboards positioned at critical junctures of a professional golf tournament are more than scoreboards. They are omnipresent yardsticks measuring the rhythm of the contest with hole-by-hole counts for the top golfers, collectively meant to tell the whole story of the event.

But Sunday in the final round of the Memorial Tournament, there was a jarring omission from every leaderboard, a name conspicuously missing.

Patrick Cantlay won the 2021 Memorial, out-dueling Collin Morikawa in a see-saw battle that included one extra playoff hole, but the heart-rending story of the event will always be the Saturday evening withdrawal of Jon Rahm, who had tested positive for coronavirus. Rahm, the defending Memorial champion, was informed of his test result at the end of the third round as he left the 18th green with a commanding six-stroke lead. The tournament continued and Cantlay’s victory will not carry an asterisk in the PGA Tour record book, nor should it.

But from the first holes played on Sunday by Cantlay and Morikawa, who became the third-round co-leaders after Rahm’s withdrawal, Rahm’s absence was recognized.

When Cantlay and Morikawa, who played together, each bogeyed the first hole, there was a disquieting murmur in the crowd around the green that may have been a shared thought: If Rahm were still in the field, his lead might now have been seven strokes with 17 holes remaining.

Play continued and Cantlay and Morikawa eventually put on a good show. They made the turn still tied for the lead and extended their head-to-head match for more than two hours. The tournament did not lack drama. Its lasting image, however, will most likely be Rahm doubled over in tears.

A spirited crowd at the Muirfield Village Golf Club in the Columbus suburbs warmed to the taut competition in the closing holes, even when soaked by rain late in the afternoon. 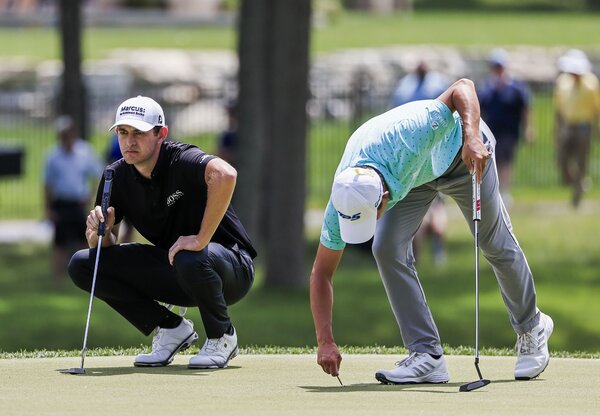 Morikawa held the lead for most of the back nine, edging ahead on par-5 No. 11 by sinking a seven-foot birdie putt that put him back at 12-under par for the tournament, which is where he and Cantlay began the day. Cantlay threatened to catch Morikawa on the 12th hole when his 42-foot putt for birdie skirted the left edge of the hole. But on the next green, Cantlay coolly stroked a 17-foot uphill putt for a birdie that tied Morikawa.

Scottie Scheffler joined Morikawa and Cantlay at the top of the leaderboard at 12-under par when he nearly holed his second shot from 131 yards at the par-4 14th hole and was left a tap-in birdie putt. Scheffler hung in for several holes before faltering with a bogey on the 18th.

Morikawa regained the lead at the par-5 15th hole when he delicately pitched from a bad lie in deep rough near the green then sank an eight-foot birdie putt. That lead held up until the 17th hole when Cantlay rolled in a twisting 23-foot birdie putt to tie Morikawa, who had to make an 11-foot par putt to stay even with Cantlay.

At the 18th hole, both players sliced their drives right of the fairway. From the rough, Cantlay nonetheless knocked his second shot pin high on the elevated, two-tiered final green. His try for birdie just skirted the right edge of the hole. Morikawa hit his second shot into a greenside bunker and his recovery from the sand left him a nervy three-foot attempt for par that he converted to send the competition to a playoff. Both golfers had shot a one-under par 71 for 13-under par.

Replaying the 18th hole, Morikawa’s approach shot from the fairway missed the green short and left, while Cantlay did the same from the right rough. Morikawa’s pitch from deep rough settled six feet from the hole. Blasting from a greenside bunker, Cantlay skittered a shot that ran 12 feet past the hole but his right-to-left par putt tracked into the center of the hole.

Morikawa’s par putt to extend the competition rolled past the left edge of the hole.

Both Morikawa and Cantlay had shaky starts to the final round. In addition to bogeying the first hole, Morikawa bungled the par-3 fourth hole when he missed a five-foot par putt. Morikawa birdied the fifth hole but carded his third bogey in six holes when he flubbed a chip near the sixth green and badly misjudged a 10-foot putt. He made a putt of similar length just to save bogey.

From there, Morikawa found some consistency to his swing and his short game.

Cantlay birdied the second hole but then gave that stroke back on the subsequent hole with a bogey set up by a wayward tee shot into the rough. An errant approach shot to the par-5 fifth green bounded into a bunker and led to a disappointing par but Cantlay rolled in a curving, right-to-left 10-foot birdie putt on the sixth hole.

At the seventh hole, Cantlay again squandered an opportunity to take advantage of a par-5 when his tee shot skidded into a fairway bunker and his escape from that hazard also ended up in the rough. He saved par. Worse, at the ninth hole, he three-putted from 40 feet for bogey.

For Cantlay, 29, it was his fourth PGA Tour victory and the second time he has won the Memorial since 2019. Cantlay’s last victory was the Zozo Championship in October 2020. Ranked 15th in the world before the Memorial Tournament, Cantlay this year has had two top-five finishes and five in the top 20.