ARLINGTON, Texas — Mookie Betts was 24 years old when he wondered if he would ever be any better. Betts had just finished as the runner-up to Mike Trout for the American League Most Valuable Player Award in 2016, with a season full of hits and homers and steals and defensive excellence. What could he do next?

“I knew it was going to be tough for me to repeat that, or get better,” Betts said on Tuesday, after a virtuoso performance for the Los Angeles Dodgers in an 8-3 victory over the Tampa Bay Rays in Game 1 of the World Series.

How’s that for personal expectations? Just be good at everything, all the time. Few players have the skills to even contemplate such a goal, let alone the drive to achieve it.

Betts is not like most players, which is why the Dodgers gave him a 12-year, $365 million contract in July, before he had even played an official game for them.

The Dodgers acquired Betts from the Boston Red Sox in a February trade, hoping he would lift them to their first championship since 1988. Betts had led the Red Sox to a title against the Dodgers in 2018, when he also won the M.V.P. award. They knew he was a superstar, but did not know the extent of his daily excellence.

On Tuesday, Betts became the first player in World Series history with a home run, two runs scored and two stolen bases in the same game. The Dodgers had seen him do it before, in August against Colorado, part of the sliver of a season in which he hit .292 with 16 homers, 39 runs batted in, 10 steals and a major league-best 3.4 wins above replacement, as calculated by baseball-reference.com.

“He does some special things like hit homers and take the extra base and things like that,” said starter Clayton Kershaw, who glided through six efficient innings for the win in Game 1. “But I think the day-in, day-out consistency of what he does on the baseball field separates him.”

On Tuesday, Betts showed the kind of daring baserunning too often missing in the modern, risk-averse game. He stole second after drawing a leadoff walk against a tiring Tyler Glasnow in the fifth, then stole third — with Corey Seager swiping second — as Justin Turner struck out. Betts broke for home on Max Muncy’s grounder to first, sliding in safely, headfirst, ahead of Yandy Diaz’s throw. 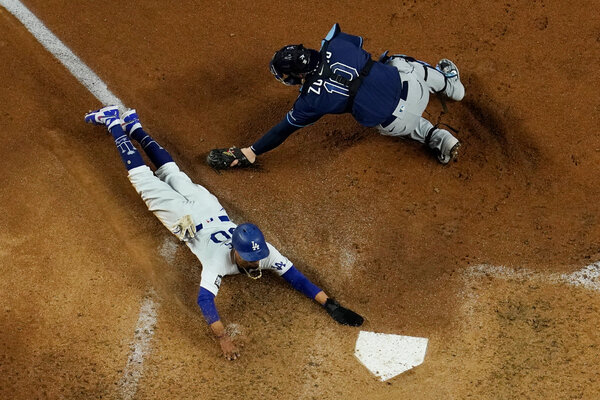 “I take pride in stealing bases,” Betts said, “and once I get on the basepaths, I’m just trying to touch home. However I get there is how I get there, but I try to be aggressive.”

Betts homered off Kershaw in their last World Series game, the 2018 clincher at Dodger Stadium. The Red Sox won the series four games to one, and the Dodgers needed 18 innings to get their only victory. That Dodgers team did not have Betts, did not have the best versions of Kershaw and Cody Bellinger, and did not have much of a chance.

In this World Series, the Dodgers have all the star power. The Rays are not a classic underdog — they were 40-20 in the regular season, the best record in the A.L. — but they look the part by comparison. Just one Tampa Bay player, starter Charlie Morton, has made multiple All-Star teams. The Dodgers have three former M.V.P. winners in Bellinger, Betts and Kershaw, and another, Seager, who has been a finalist.

The Rays might have an edge in Game 2, with the former Cy Young Award winner Blake Snell facing the Dodgers’ Tony Gonsolin, who will be backed up by Dustin May and Julio Urias. But after surviving a three-games-to-one deficit to Atlanta in the National League Championship Series, the Dodgers seem to be playing with the kind of ease and joy befitting their pedigree.

“I don’t know if looser is the right word, but we’re having fun,” said Bellinger, who finished the scoring in the N.L.C.S. with a go-ahead homer, and started the World Series with another, off Glasnow in the fourth inning. “We know how challenging it is; it’s not an easy sport. To put pressure on yourself, it’s just not the way to do it. I think we’re all just trusting in each other and understanding how good we are.”

Bellinger was a platoon player in the 2018 World Series, starting only two of five games. Kershaw was hit hard in the opening games of the N.L.C.S. in Milwaukee and the World Series in Boston, feeding a storyline he has sought for years to shake.

Kershaw evened his postseason record on Tuesday at 12-12, with a 4.22 earned run average. He faced 21 hitters in Game 1 and allowed only three to reach base: a single and a walk in the first inning, and a homer by Kevin Kiermaier in the fifth.

He was similarly dominant in the 2017 opener against the Houston Astros, who came back to win their infamous championship, aided by a sign-stealing scheme that likely robbed Kershaw of elusive postseason glory. He was not careful enough in changing his signals for Game 5 in Houston, and the Astros feasted on his signature slider. The Dodgers lost in seven, and the Rays denied them a grudge match by beating Houston in the A.L.C.S.

“No, you can’t think like that,” Kershaw said on Monday, when asked if the team had wanted another chance at the Astros. “The Rays are a very formidable opponent and winning a World Series is going to be special no matter who you play. 2017 is over; we can’t go back and worry about that.”

The Dodgers keep earning chances to make up for October heartbreak. They were 43-17 this season, for a .717 winning percentage that ranks as the best for any team since the 1954 Cleveland Indians.

That team lost to the New York Giants in a World Series sweep, so the Dodgers are already a step ahead. You get the feeling there are more victories to come.