Major League Baseball’s crisis of the moment will be worth the short-term distraction, Commissioner Rob Manfred said on Wednesday, if the league’s effort restores balance to the product on the field. The league’s enhanced enforcement of foreign-substance usage by pitchers has made mandatory umpire checks a strange new sight in every game.

“I’d like to make our fans comfortable that players are following the rules,” Manfred said in a telephone interview. “I think that’s really important in terms of the integrity of the game. In terms of the outcome piece of it, it is my expectation, and my hope, that what we are seeing in the early numbers turns out to be the overall result — that is, higher batting average, higher on-base percentage, higher slugging, lower strikeout rate, lower walk rate and less hit-by-pitches. That’s what we’re seeing right now, and we hope that holds.”

With a limited schedule on Monday, the introduction of mandatory between-inning checks of pitchers by umpires went by without incident. But on Tuesday in Philadelphia, Washington’s Max Scherzer reacted angrily to an inspection on the mound ordered by Phillies Manager Joe Girardi. And in Texas, Oakland reliever Sergio Romo comically removed his belt and dropped his pants when umpires checked him.

Max Scherzer has once again been checked for sticky substance, this time during an inning.

The Scherzer incident aside, Manfred said he was pleased with how the first two days had gone.

“The inspections have gone forward, the games haven’t gotten longer, we’ve had no ejections,” he said. “And the data seems to suggest that we’re moving the game in the right direction, that we found a problem that needed to be addressed and it’s being addressed.”

The problem, the league said, was that too many pitchers had been using foreign substances to enhance the spin of their pitches. League officials, managers and even hitters had tacitly accepted this for years, because some substances — like sunscreen mixed with rosin — were thought to be relatively harmless ways for pitchers to improve their grip on slippery baseballs. 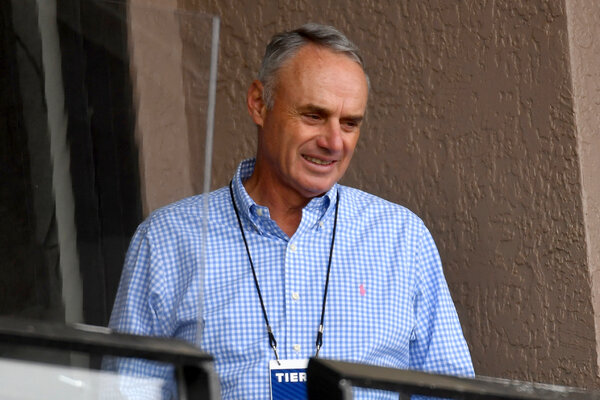 Asked if the league had been too slow to act, Manfred pointed to an incident in March 2020, when the Los Angeles Angels fired their visiting clubhouse manager, Bubba Harkins, for providing sticky concoctions to pitchers.

“We started communicating with the clubs on this process right after we became aware of the situation in Anaheim,” Manfred said. “We communicated about our concern on the issue. We came back prior to the start of the ’21 season, communicated again about it and I think that when we saw what we perceived to be an escalation in the behavior, not a de-escalation, we came to the conclusion that we had to do something now. That’s a judgment call.”

M.L.B. decided this March to begin gathering and examining baseballs for evidence of foreign substances. That effort, Manfred said, should have compelled pitchers to stop. Instead, he added, they did not heed the warning until early this month, when the league said it would start checking all pitchers on June 21.

“We weren’t running around collecting baseballs because we thought it was scientifically interesting,” he said. “We were doing it because we thought we had a problem, and we didn’t jump right in to some disciplinary mode. We gave people an opportunity to adjust. Unfortunately what we saw is, it didn’t happen.”

Manfred dismissed the notion that pitchers need some kind of gripping agent — besides rosin — to avoid accidentally hitting batters with pitches.

“There’s a lot of things that get said that are counterfactual, that it’s more dangerous,” Manfred said. “The data doesn’t support that. The fact of the matter is that we had more use of more effective sticky substances early this year than at any time in the history of baseball, and we had more people hit by pitches than at any point in the history of baseball. Those are the facts.”

The highest ratios of hit-by-pitches since 1900 have occurred in the pandemic-shortened 2020 season (0.46 per game) and this season (0.43). The league’s belief is that pitchers, armed with overpowering stuff enhanced by illegal substances, were focused more on sheer power and less on location.

Many pitchers, though, believe the league is being unrealistic by forcing them to adhere strictly to the rules without offering an effective alternative to help their grip. The league has experimented in the Arizona Fall League with a tackier ball — similar to the style used in Japan — but players did not endorse it.

M.L.B. is now working to develop a substance that could be applied uniformly to baseballs to add tackiness, but Manfred doubted it would be ready in 2021.

“We’re looking into it with a view that at some point, we would have a substance that we could use on all baseballs,” he said. “The part of the question that I don’t have a view on is the this-year part of it. I think it’s much more likely that would happen in a future year.”

Manfred said it was too soon to know how long the mandatory umpire checks would continue; he must be convinced, he said, that the problem had been addressed and would not “reassert itself.” He said that while the league had been considering rule changes, it was important to uphold existing rules, like the one umpires are enforcing now.

Scherzer, a member of the executive board of the players’ union, referred to the “Manfred rules” after Tuesday’s game and seemed irritated by the mandatory check, even before the one Girardi requested. Asked about Scherzer’s comment, Manfred called Scherzer “a smart young man” who is entitled to his opinion.

“My opinion is, we conducted a process that gave people an opportunity for input into what was going to happen and gave the individual players an opportunity to adjust their behavior,” Manfred said. “I think that those two things are indicative of a fundamental fairness in the process. So if, given those two facts, he wants to call them my rules, he can call them my rules.”