Kylian Mbappé will eventually turn up for his interview in an oversized vehicle outfitted with tinted windows, and accompanied by his mother, two P.R. reps, two lawyers, a small documentary crew, a stylist and a friend whose role is, initially, unclear. This is how one of the world’s biggest sports stars travels these days. Kylian Mbappé doesn’t just walk through the door. He arrives.

But not just yet.

First comes a large security man who has politely requested — and this request is clearly not optional — that he be allowed to make a sweep of the spaces his client will visit, to walk the halls Mbappé will walk, to ascertain the most direct escape routes “if I have to get my guy out in a hurry.” The security man will have done the same thing a few nights earlier, at a Manhattan restaurant where Mbappé and his entourage planned to have dinner, and he most likely will do the same later for an event in Times Square for Nike.

Only when the security man is satisfied is a cellphone produced, and a call placed. Only then is the driver told to deliver Kylian Mbappé to the Manhattan headquarters of The New York Times.

This was the summer when Mbappé, one of the most famous athletes in the world, became one of the most valuable, too. It was when a supremely talented soccer star cashed in on a plan for greatness set in motion before he entered his teens, emerging from a tug of war between his sport’s new money, Qatar-backed Paris St.-Germain, and its ultimate aristocrat, Real Madrid, with a contract that reportedly will pay him more than $250 million over the next three years.

The deal has granted Mbappé new power at his club, new resources to finance his expanding business empire and new prominence inside and outside the game. At one point this summer, the fight for his signature grew so intense that the French president Emmanuel Macron intervened to tilt the balance in favor of P.S.G., and the nation.

Over the next few months, Mbappé’s profile is likely to rise further. He is the centerpiece of his star-studded team in Paris, first among equals that include the Brazilian superstar Neymar and the Argentine playmaker Lionel Messi, as it seeks to end its thus far fruitless efforts to win the Champions League. In November, Mbappé will travel to Qatar, where his France squad will try to become the first team since Pele’s Brazil to retain the World Cup.

But first he has agreed to an interview. He has quite a bit to talk about.

It was one of those evergreen assignments that schoolteachers give, a prompt to get students to pause and ponder their futures, to explore what they want to be. In May 2014, 15-year-old Kylian Mbappé and his classmates at the academy of the French soccer club A.S. Monaco were asked to design a magazine cover featuring an image of themselves.

An idea quickly formed in Mbappé’s mind. He would not mock up a version of Paris Match or GQ or French Vogue, as some of his friends had, but rather of the newsmagazine Time. As the cover’s visual focus, Mbappé selected an image of himself, seated with his head slightly cocked to one side and his hands clasped beneath his chin. The headline, in a bold white font, declared him “El maestro.” The master. Smaller headlines, tucked into the top corners in block letters, labeled him the best young player in the world, a priority of France’s national team coach, the future of soccer. 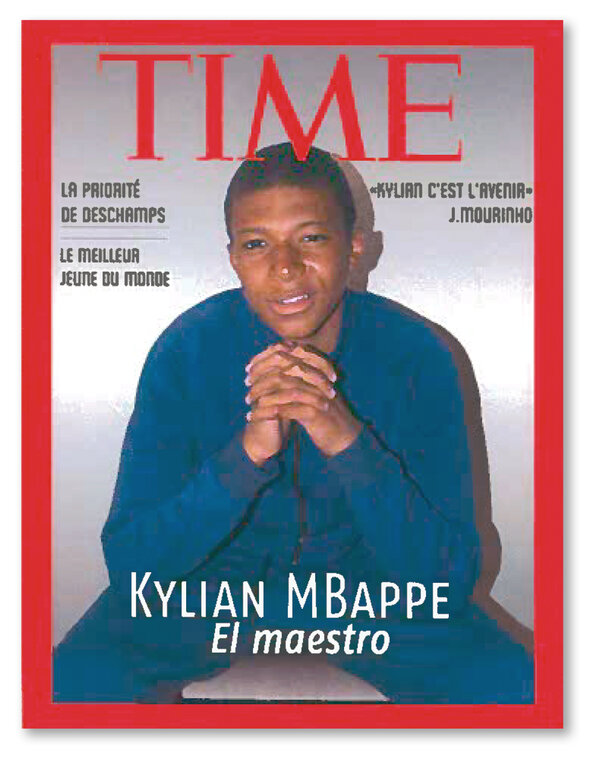 As a child’s flight of fancy, the mocked-up magazine cover could not have been more prescient. Four years after he submitted the assignment, Mbappé appeared on the front cover of the actual Time magazine. Those headlines proved prophetic, too. By age 18, Mbappé had already led France to the World Cup title, becoming the first teenager since Pelé to score in the final. He was widely regarded as the best young player in the world. He represented, by nearly anyone’s assessment, the future.

“Crazy,” Mbappé, 23, said when he was shown the image of the magazine cover at the start of an interview in July. It is a word he uses often to describe the arc of his life. “Because, you know, when you are 15, you have ambition,” he said. “Every kid has ambition. But when that comes true, after only a few years, it’s something crazy.”

For Mbappé, all the fanfare, all the parts of his traveling circus and all the meetings with fashion brands and book publishers and media moguls are not so much “crazy” but the normal features of his fast-forward life.

After signing a reported $250 million contract to stay with Paris St.-Germain, Kylian Mbappé sat down with The New York Times to discuss his past, his present and his future ambitions.

Here’s what he told us →

Mbappé says even he was convinced he would join Real Madrid this summer. Among those who lobbied him to stay was President Emmanuel Macron of France.

Here’s Mbappé on their meeting.

Such is Mbappé’s ambition that he says he is not willing to choose between two big priorities: winning a second World Cup with France or a first Champions League title with P.S.G.

He wants to try to win both, something he says is a matter of “mentality.”

Mbappé’s new contract has given him a new status and importance at P.S.G. But that also gave rise to reports that he now has the power to hire and fire coaches, or otherwise shape the direction of the club and its roster.

That’s just not true, he told us.

Mbappé had posters of Real Madrid stars on his wall as a boy and trained with the club at 14. The club and the player continue to exert a magnetic pull on each other.

While stressing that team goals remain his priority, Mbappé can rattle off the number of world player of the year awards won by stars like Lionel Messi and Cristiano Ronaldo. He believes it is now his time to lay claim to those honors.

Mbappé has been groomed for stardom since he was a boy. But that has meant sacrificing much of his childhood and being thrust into a man’s world while still a boy.

It is here he has some regrets.