LAKE BUENA VISTA, Fla. — It was nearing midnight, and Jamal Murray concluded his postgame news conference by slowly rising from his folding chair with the expression of someone who had spent 12 hours on an assembly line. He had football-sized ice packs on his knees. As he lumbered toward the door and a waiting bus outside, he let out a load groan.

Murray had done everything he conceivably could for the Denver Nuggets in their 114-108 loss to the Los Angeles Lakers on Thursday night, and you may have heard something like this before. Throughout the N.B.A.’s restart at Walt Disney World, no player has been more dynamic or entertaining or competitive than Murray, a 23-year-old point guard who has emerged as a star.

His theatrics may not be enough against the Lakers, who have a three-games-to-one lead in the N.B.A.’s Western Conference finals before Game 5 on Saturday. All Murray did in Game 4 was collect 32 points and 8 assists while shooting 12 of 20 from the field. He was so good, LeBron James defended him in the fourth quarter as the Lakers fought to preserve their lead.

“I knew it was winning time, and Jamal had it going,” James said. “The kid is special.”

The level of difficulty for Murray’s shots tends to range from tricky to hazardous. He shoots from one foot. He shoots with the wrong hand. He shoots falling down. He shoots while absorbing contact from large human beings. He shoots with opposing elbows in his stomach and palms in his face. He shoots by throwing the ball off the backboard from absurd angles, and he shoots by launching 3-pointers from Epcot Center. But he keeps shooting, and he will need to shoot some more if the Nuggets have any chance in the series.

Then again, the Nuggets are comeback kings. Already in the postseason, they have bounced back from a pair of three-games-to-one series deficits — against the Utah Jazz in first round, then against the Los Angeles Clippers in the conference semifinals. The Nuggets are familiar with bleak circumstances. The only difference now is that they have to pull off some of their magic against James and Anthony Davis, who led the Lakers on Thursday with 34 points.

In addition to finishing with 26 points, 9 rebounds and 8 assists, James took on the (suddenly) heavy burden of defending Murray in the game’s late stages. James went to Frank Vogel, his coach, to request the assignment, and what was Vogel going to say? No?

“Obviously, I granted it,” Vogel said. “He did a great job down the stretch trying to contain him one-on-one.”

Murray indicated that he did not get much help from the officiating crew on some of his late drives, and that would probably be a fair assessment.

“I did get fouled on a few,” he said. “We could see the replay clearly.” 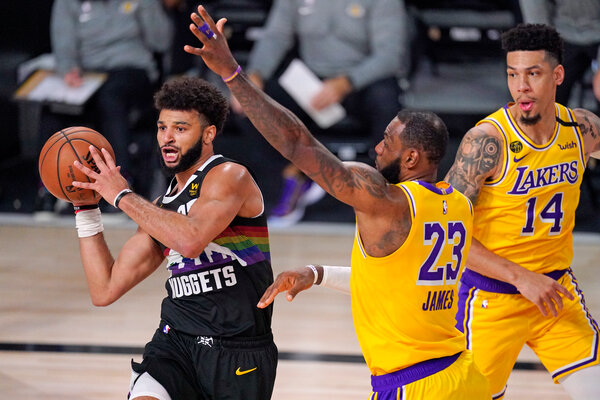 In any case, and no matter what happens the rest of the way, no one will soon forget what Murray has done in the bubble. In 18 playoff games, he has averaged 26.9 points and 6.6 assists while shooting 51 percent from the field and 46.6 percent from 3-point range. He also owns one of the postseason’s most bizarre statistics. In Game 2, the Nuggets outscored the Lakers by 16 points in the 44 minutes when Murray was on the court. In the 4 minutes when he was on the bench, the Lakers outscored the Nuggets by 18 points — and won by 2.

Earlier this week, Nuggets Coach Michael Malone spoke of Murray’s rapid maturation. Malone recalled a conversation they shared not long after Denver bowed out of last season’s playoffs in the conference semifinals.

“Coach, you know what drives me crazy?” Malone recalled Murray asking him. “You say I’m inconsistent. What bothers me is that you’re right. I know I have to be more consistent.”

Murray made it his personal challenge, Malone said, to become a steadier player alongside Nikola Jokic, the team’s do-everything center. Murray also committed to improving as a defender.

“Last year, we knew what we were getting from Nikola,” Malone said. “But what kind of game would Jamal have? That’s no longer the case. We have two superstars in Nikola and Jamal, and a lot of young, talented players behind them.”

The Lakers, who are much older and more experienced, are winning this series with physical force, and Vogel seemed to broadcast how he wanted his players to attack Game 4 by sliding Dwight Howard into the starting lineup. Howard, a 34-year-old wrecking ball with limbs, had 11 points and 10 rebounds in the first half alone.

“Nobody touched him at all,” Malone said. “He did whatever he wanted.”

The Lakers do not play a particularly pleasing style of basketball. They run at the rim. They seek contact. But it is effective.

On Thursday, they shot 35 free throws and thoroughly outrebounded the Nuggets. Malone did not sound delighted with the officiating — he said he would work “the proper channels” to address his concerns with the league, in much the same way that Vogel had after Game 3 — but stressed that he was not using that as an excuse.

“This game had nothing to do with that,” he said before citing the Lakers’ work on the offensive glass. “It’s the 25 second-chance points. That was the reason we lost this game.”

“I’m running the poor kid into the ground,” Malone said. “When I take him out, things seem to go sideways in a hurry.”

Now, Murray is facing a fresh challenge, his most daunting one to date. Despite the ice packs and the groans and the enormous minutes he continues to supply, Murray said he was ready.