At one point, for reasons that presumably made sense in context, the coach and one of his assistants spent a few minutes onstage playing padel — a Basque version of tennis — with a set of frying pans. At another, three players were lined up in descending order of height and asked to perform as backing vocalists for someone who, apparently, self-identifies as a rapper.

Most of the countries competing in this summer’s European Championship announced their squads in the traditional manner: a list of names and some anodyne quotes in a simple news release or, for those investing a little more effort, a slick graphic released on social media.

Italy, though — well, Italy went in a very different direction. It unveiled its players for the tournament during a variety show, broadcast live and late into the night, that did not actually conclude with confirmation of the squad. The federation never quite managed to fit it in, what with all the music and games and cooking equipment. Italy’s list was released on social media a couple of hours later.

The proceedings, though, created just the sort of impression Roberto Mancini — the pan-wielding coach — wanted. Italy’s record at major tournaments over the last decade or so has been checkered at best. It reached one final, at Euro 2012, and performed creditably in 2016. In 2010 and 2014, though, the Azzurri slunk home from the World Cup at the end of the group stage. In 2018, for the first time in more than half a century, they did not even qualify. 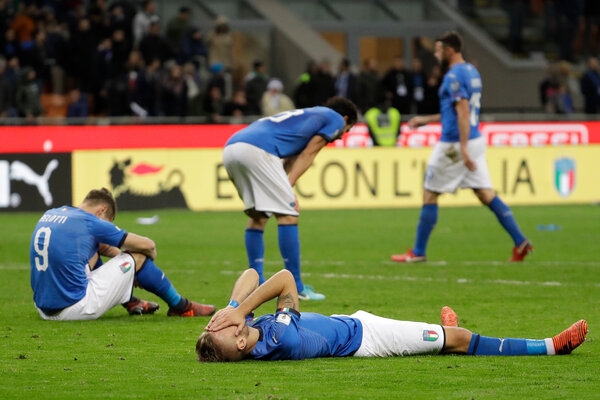 So as they prepare for the opening match of the postponed Euro 2020, against Turkey on Friday in Rome, Mancini and his team should be under intense pressure. Major tournaments, ordinarily, are a time of high expectation and hair-trigger tension.

This Italy, though? Well, it has gone another way. The variety show was only the first piece of media content the national team will put out over the next few days. There is a fly-on-the-wall documentary, too, and an official song that is one long inside joke. Mancini appears, singing along, in the video for it.

The angst and the anguish of recent years have been thoroughly banished. Instead, as Mancini said while he stood onstage that night, broadcasting live to the nation, his frying pan laid to one side, he is going to try something novel.

Marcello Lippi did not hear the bell tolling, not at the time. As he pored over his choice of players to take to the 2010 World Cup, Lippi found himself picking the familiar names, the familiar faces over and over again. The core of the squad was much the same as the one that had won the tournament for him in Germany four years before. The coach chose the players, he would say later, out of “gratitude.”

“I realized too late that some had given all they had,” he said.

That moment of realization can be timed and placed with unerring accuracy: Ellis Park, Johannesburg, June 24, 2010, when Slovakia — appearing in a World Cup for the first time — beat Italy to send the reigning champion home, violet with indignity.

That night, Lippi sat on a raised platform in a media center and described how his team had played with “terror in its heart and its head and its legs.” The responsibility for the national humiliation — there had also been a draw, a few days earlier, against New Zealand — was his, and his alone, he said. He would fall on his sword soon after.

Over the last decade, Italians have grown accustomed to that sort of denouement in a major tournament. In 2014, when Italy was again eliminated at the World Cup’s first hurdle, the coach and the two top executives at the national soccer federation all resigned live on television. Failure to qualify for 2018 cost not only the head of Gian Piero Ventura, the coach, but that of his boss, too. Italy has spent a decade leaping out of frying pans and into fires.

At the same time, the explanation offered by Lippi for that failure in 2010 has been internalized on a national level, automatically applied to every disappointment that has followed. “I did not think we would win the World Cup,” he said that night in Johannesburg, not far off heresy for an Italian manager. “But I thought we could perform better than that. This is clearly not a fantastic moment for Italian football.”

Heads still rolled, but Italy accepted that its tournament performances were symptoms, rather than causes, of a broader malaise. Lippi suffered because the team that had won the World Cup had grown old. His successors failed because no new generation had emerged to replace them. As the shadow of that glorious team of 2006 grew longer, the darker and deeper the gloom became.

There are any number of explanations for why that might be. Massimiliano Allegri, Juventus’s coach of the past and present, argues that youth soccer in Italy is, effectively, too tactical: Coaches are so worried about their jobs that they mask the individual shortcomings of their players with strategy.

“Instead of letting kids learn how to defend one-on-one, they give them cover,” Allegri said. “They double up. But that means the kid doesn’t learn. So when they have to play one-on-one, they don’t know how.” That, in his mind, is why “Italy does not produce champions anymore.”

Paolo Nicolato, the country’s under-21 coach, contends that Italy’s soccer culture is too intolerant of errors, which he labels “a necessary step of growth.” It suffers from a “bad relationship with the future,” he says. “We are very focused on the present.”

That assertion is borne out by facts. Last season, of the 50 youngest teams in Europe’s top 20 leagues, only one was Italian: A.C. Milan. Only three Italian sides appeared in the top 100. More significantly, only five percent of all the minutes Serie A teams played last season were given over to homegrown, academy-reared players. Italian soccer remains a culture that is deeply distrustful of youth.

“It is a strange championship,” said Maurizio Costanzi, the head of youth development for one of the few teams to buck the trend: Atalanta. He has spent four decades working with young players in Italy, and he has noticed a definite, incontrovertible change in both the quality and the quantity of emerging prospects.

He wonders if that might be related, in part, to the demise of street soccer, or to the rise in athleticism in the sport squeezing out the sorts of players — playmakers and schemers — who long characterized the Italian game. But he is sure that those who do make it are not given a chance either quickly or reliably enough to succeed.

“You get cycles in every country, and you can’t plan out when players come through precisely,” he said. “But in Italy one of our problems is that we only think about the result. It puts a limit on us. It means that our players seem to mature more slowly.”

As a player, four decades ago, Mancini was an exception to that rule, making his debut at 16, rising to become an international long before he hit 20. Perhaps it was natural, then, that as a coach he should set about trying to change the culture.

The problem, to him, was a lack of opportunity, not a lack of ability. “Maybe you are a little afraid to let the young players play,” he said not long after taking the job as national team coach. “It is just a matter of time. You just have to believe it.”

The high-speed Frecciarossa train that collected Italy’s squad in Florence on Thursday had been specially painted, its bullet-nosed front decked out in a streak of bright blue. The journey to Rome would take only a couple of hours. When the squad disembarked, though, the plan was for the players to find themselves back in 1990.

This is the first time since that year’s World Cup that Italy has hosted a major international tournament. Rome may be one of Euro 2020’s side stages — London has more games than anywhere else, including both semifinals and the final — but that has been more than enough to stoke the memory.

The authorities have encouraged it: The opening ceremony on Friday will feature the tenor Andrea Bocelli, playing the role of Luciano Pavarotti and singing “Nessun Dorma,” the soundtrack of that Italian World Cup.

The media has perpetuated it: Italy will play the opening game, La Gazzetta dello Sport noted this week, in the stadium that was home to so many of what, in 1990, became known as the notti magiche: magical nights. Even Mancini has embraced it, his decision to call up the unheralded Sassuolo striker Giacomo Raspadori seemingly an attempt to unearth his own Totò Schillaci, the captivating icon of that long, sweltering Italian summer three decades ago.

For the first time in a long time, the country seems to have a team capable of wearing its history lightly. Mancini’s Italy has not lost in 27 games, since late 2018. At one point, it had won 11 consecutive games, a record. It may not have faced any of its putative rivals for the crown this summer — the Netherlands aside — but the sense of momentum is undeniable.

Mancini has created an Italy refreshed and rejuvenated. In the three years of his tenure, he has given international debuts to 35 players. By Italian standards, there is youth shot through his team. Goalkeeper Gianluigi Donnarumma and defender Alessandro Bastoni are both 22. Midfielders Manuel Locatelli and Federico Chiesa are a year older. Nicolò Barella and Lorenzo Pellegrini are 24.

That the squad has the air of a team for the future, not the present, works in its favor. Italy feels young and daring, new and different. It feels like the sort of team a country might find fun. It is, though, a testament to serious, painstaking work.

Ever since that defeat in 2010, Italian soccer has been trying to restore its course, to piece together some idea of how it might produce players again. To do so, it commissioned a series of reviews and assessments carried out by some of the sport’s greatest names: Gianni Rivera, Demetrio Albertini, Arrigo Sacchi, Alessandro Costacurta.

The key figure in Italy’s reconstruction, though, is an unknown: Maurizio Viscidi, the coordinator of the country’s youth teams. It was Viscidi — initially hired by Sacchi a decade ago — who oversaw a revolution not only in the structure of Italian youth soccer, introducing an under-15 team and reorganizing youth competitions, but also in its mind-set.

He has tried to wean the programs he oversees off an addiction to the result, to the here and now, and to make it think more about the players it is developing. He has instituted a policy linking Italy’s youth teams more intrinsically to the senior side, making the step up easier.

And in Mancini, he has found a coach after his own heart. A few months after taking the job, Mancini organized a joint training camp involving Italy’s senior team, its under-21s, and its under-20s. The message was clear: Youth would no longer be overlooked. It would, instead, be front and center. The squad he has named for the tournament is made up of his children of the revolution.

How that revolution ends is not yet clear. This summer may be the redemptive climax. It may have to wait until Qatar, next year. It may never come at all.

To Mancini, though, that is not the point. What matters, now, is that his team and his country have a little fun in finding out.