TORONTO — The Yankees lost here on Wednesday, snapping an 11-game winning streak. It was a closely fought game, as most of the contests between them and the Blue Jays have been this season.

Trailing by 2-1 in the ninth inning, the Yankees loaded the bases with two outs but fell a step short of tying the score when shortstop Isiah Kiner-Falefa smacked a ground ball to third baseman Matt Chapman, whose bouncing throw was scooped up at first by Vladimir Guerrero Jr., who showed off his flexibility by doing the splits.

“I was very mad at myself,” Chapman, a three-time Gold Glove winner, said of the throw, “and then very excited.”

The Yankees lingered on the field as they challenged the play but ultimately they packed up the visitor’s clubhouse and headed home. Even with a defeat, they had won the three-game set, maintaining the best record in baseball (18-7) and handing the Blue Jays their first series loss of the season.

“Winning 11 in a row, that’s no small task,” Yankees third baseman Josh Donaldson said. “It doesn’t matter who you’re playing. This is a really good ball club, and we came in here and played really well. Losing a one-run game on the road and we had an opportunity in the ninth to go ahead, I like our chances. Today we weren’t able to cash it in but the next time I’ll be expecting us to.”

One month into the season, the Yankees have shown that they are something different than the Yankees of the recent past. Their pitching was their best asset in 2021, when they were 92-70 and fell to Boston in the American League wild-card game, yet it has been even stronger this season. Their offense is more dynamic, striking out less and hitting the ball harder. Their defense has made the most dramatic growth, going from one of the worst in Major League Baseball to one of the best so far.

A season that was in doubt is suddenly in full gear.

In every way, Manager Aaron Boone said this week, the 2022 Yankees are better.

“We’re a better and more versatile offense,” he said. “We run the bases better. There’s no question that we catch the ball better and have a chance to be a very good defensive team this year. Pitching was kind of our calling card last year. Yet with that said, I feel like we have a better pitching staff top to bottom this year.”

During the winning streak, the Yankees demonstrated they can win in a variety of ways: by scoring lots of runs, by winning close contests with good pitching and fielding, by relying on more parts of the roster. Granted, most of the opponents of late had losing records and were not expected to compete for the postseason — the Baltimore Orioles, the Cleveland Guardians and the Kansas City Royals — but that was why matchups against the Blue Jays are always so telling.

On Monday, the Yankees beat the Blue Jays at their own game. Through Wednesday, Toronto was 10-3 in one-run games, playing and winning more nail biters than anyone in baseball and showing that their pitching and fielding were capable. The Yankees won, 3-2, because of a solid start from Jordan Montgomery (two runs over five innings), a stout effort from the bullpen and all of their runs driven in by second baseman Gleyber Torres, who endured the worst season of his career in 2021.

“The swing didn’t really work with my hands and my lower body was going the opposite way,” said Torres of a swing that last year produced a .259 average, nine home runs and a .697 on-base plus slugging percentage, all career lows for a full season. “I’m just now in more control.”

In a 9-1 win on Tuesday, Yankees starter James Taillon, further removed from his ankle surgery last October, was stout again, allowing just one run over six innings. And the Yankees offense was powered by outfielder Aaron Judge, who smashed his ninth home run of the year. After placing a large bet on himself by turning down a seven year $213.5-million contract extension before the regular season began, Judge was hitting .293 with a Yankees-leading 1.009 O.P.S. through 24 games.

“It’s just 11 games but we’ve got more work to do,” Judge said of the team’s winning streak, later noting that he was happy to be free of nagging injuries so far this season. “A lot of good things happened. We showed what this team is made of, but we showed we can win games with our pitching and our offense. We can win with small ball or the big fly. We’ve just got to keep staying consistent.”

Even though the Yankees’ offense sputtered on Wednesday against Blue Jays starter Yusei Kikuchi, they nearly pulled off a comeback against closer Jordan Romano, who leads baseball with 12 saves. Against a potent Blue Jays lineup that might welcome back injured slugger Teoscar Hernández this weekend, Yankees starter Nestor Cortes Jr. battled shaky command, walking four and coughing up two runs over four innings.

Still, the Yankees rotation ranked fourth in baseball (with a 2.85 earned run average) through Wednesday. When including the bullpen, the Yankees pitching staff (2.60 E.R.A.) trailed only the Los Angeles Dodgers (2.21) in M.L.B. Five more regular-season months remain, but that’s already an improvement for the Yankees, who were sixth in E.R.A. (3.74) last season.

The most noticeable upgrades, though, have been on offense and defense. By subtracting plodding sluggers who were worse defenders, such as first baseman Luke Voit and catcher Gary Sánchez, the Yankees traded for catcher Jose Trevino and Kiner-Falefa, and re-signed Anthony Rizzo. Kiner-Falefa, who was hitting a team-high .295, and Rizzo, who has nine home runs, strike out less often.

Paired with Kyle Higashioka, the Yankees’ catching duo is adept at calling games and framing pitches. A Gold Glove winning third baseman in 2020, Kiner-Falefa allowed Torres, who struggled at shortstop last season, to move back to second base. Rizzo, a four-time Gold Glove winner, saves his infielders with his scoops and footwork at first base. Donaldson is sure handed, and versatile infielder D.J. LeMahieu is healthier than last season.

Based on some advanced metrics, the Yankees’ defense has jumped from among the worst in baseball into the top 10 this season. The trickledown effects will show throughout the year: Better fielding means fewer extra pitches, fewer runs and more wins. The Yankees’ 73 unearned runs allowed last year were the eighth most in baseball, while they are on pace to cut that number in half this season.

Entering this season, the Yankees were expected to contend for the playoffs despite a largely similar cast of characters, few big-name acquisitions and questions about if they had done enough to improve over the off-season. So far, the results bode well.

“My mind has never changed since the first day of spring training,” Judge said. “I know what this team has and what they’re capable of. To be honest, I don’t really read what the experts have got to say about how this team is going to perform. We’re just going to go out there and put in the work and the results are going to show up.” 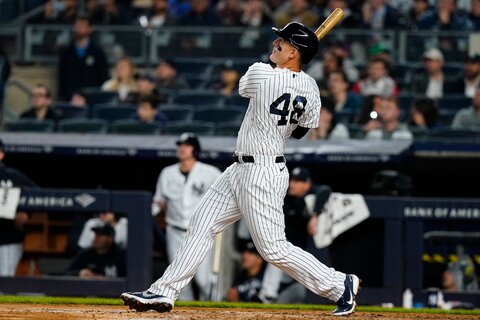 With April having come to a close, Anthony Rizzo of the Yankees is leading the majors in home runs with nine. 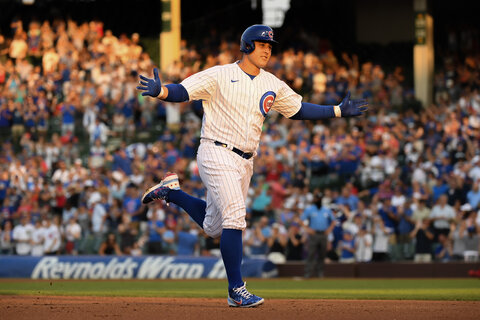 This year his home runs are different. Seven of the nine have come at home and one of them, a 327-footer against Baltimore, would have been out of the park only at Yankee Stadium. Two others would only have left seven or fewer stadiums. 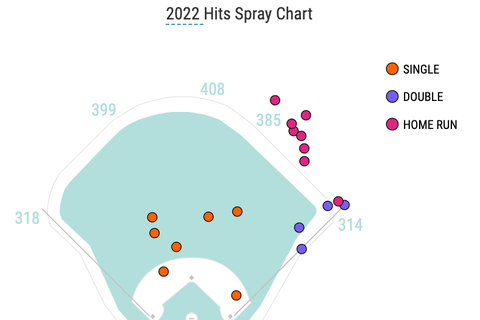 Yankee Stadium’s design is helping Rizzo. The field is only 314 feet down the right field line, and the distance stays relatively short before reaching 385 feet in the right-center power alley and 408 feet at its deepest point. 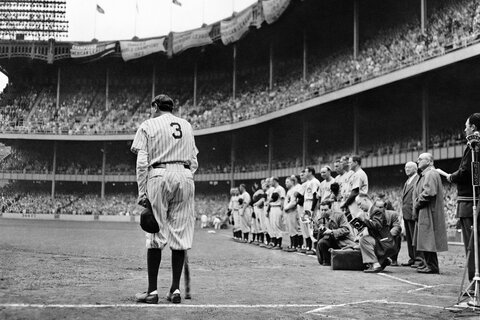 A short porch in right is a Yankee Stadium tradition dating to the original “House That Ruth Built.” Playing to Babe Ruth’s strengths, the old park was, at one point, only 295 feet down the line but extended to 490 feet in center. 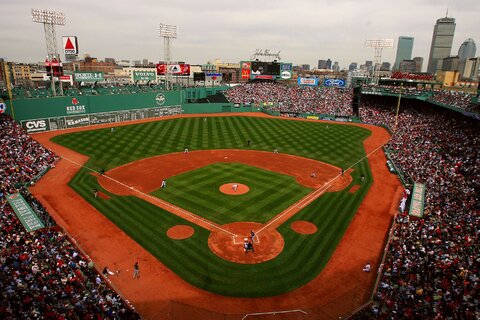 It was not unusual for older parks to have short porches — Fenway Park’s Pesky Pole in right is only 302 feet from home — but those fences typically formed an arc, while Yankee Stadium’s stays short and flat into right-center. 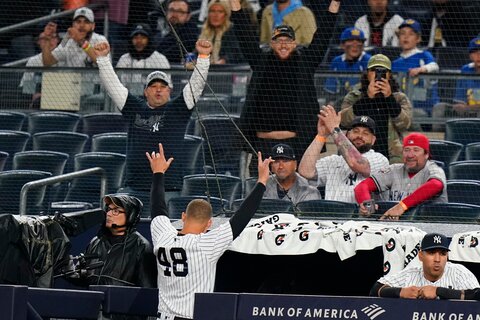 For his part, Rizzo says he is not trying to exploit anything. “I’m not worried about what park we’re playing in,” he told reporters this week. “I just try to have my at-bat. I think that just comes with experience in the big leagues.” 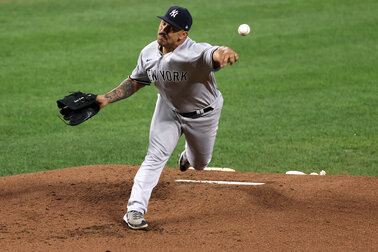 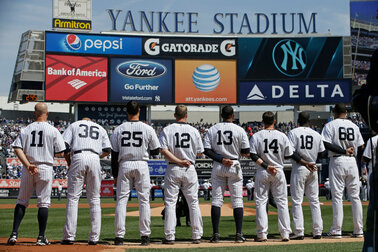