SWANZEY, N.H. — During a drive on a steep, winding road in this small town, it would not be surprising these days to see an elite hurdler jump into the bushes to avoid being hit by a car.

That hurdler, CeCe Telfer, is hoping to qualify for the United States Olympic trials, which begin June 18 in Eugene, Ore. The asphalt road is her primary training facility.

In 2019, Telfer became the first openly transgender woman to win an N.C.A.A. title; she was a fifth-year senior at Franklin Pierce University, a Division II school in Rindge, N.H. Now she is among a handful of transgender women seeking to reach the Tokyo Games, which begin in late July.

Olympic historians say that no athletes at the Winter or Summer Games have publicly identified themselves as transgender when they competed. At least two announced that they were transgender sometime later, including Caitlyn Jenner, who won a gold medal in the decathlon in 1976.

Some athletes who identify publicly as transgender will most likely compete this summer in Tokyo at the Olympics and Paralympics, though many competitors are still attempting to qualify. Yet even as opportunities for transgender athletes have opened up at the college and Olympic levels, there has been a spike in state legislation across the United States to bar transgender athletes — mainly younger girls — from competing on teams that match their gender identity.

Recent clashes over transgender athletes have made it more important for Telfer to capitalize on her opportunity for elite competition. 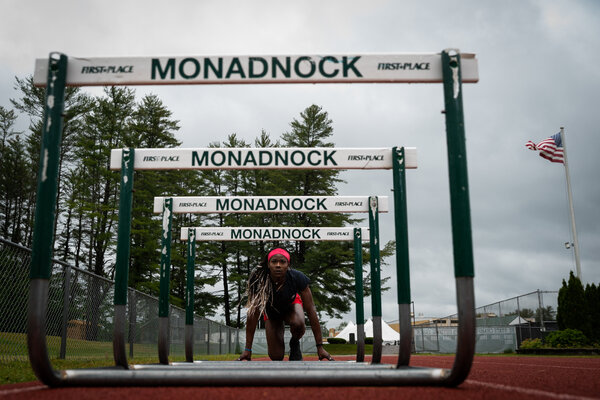 Her path to the Olympic trials has been difficult. She struggled during the coronavirus pandemic to find a coach who would support her, and even flew to Mexico to train briefly. Telfer ultimately returned to New Hampshire, where she was sleeping in her car until the psychologist extended an invitation to stay at her home in Swanzey, a town not far from Franklin Pierce.

Three days a week, training sessions involve mainly Telfer and cars on the Swanzey asphalt. For three other days, Telfer drives about two hours to a high school track in a Boston suburb. There, she can use the hurdles and work with another athlete.

She meets the International Olympic Committee’s eligibility requirements after suppressing her testosterone levels and sustaining them for at least a year. But to reach the Tokyo Games, where she hopes to race in the 400-meter hurdles, Telfer must first qualify for the national trials. To do that, she needs to run the race in 56.5 seconds at a feeder meet. It will be tough — her best time at a qualifying meet so far has been 57.5 seconds.

If Telfer reaches the trials, she will have to finish among the top three in her event to have a chance of going to Tokyo.

After she left college in the spring of 2019, Telfer tried to persuade several coaches to help her achieve her Olympic goal. Two initially agreed to work with her.

One stopped replying when he realized she was transgender, Telfer said. The other was in Mexico. In February, after nearly two years of training on her own, Telfer gave up her apartment and job at a nursing home in New Hampshire and flew down. She stayed with a friend’s family and was coached for the first time since college.

But her stay was brief. Telfer, who grew up mostly in Jamaica and Canada, needed to return to the United States to see through her application for American citizenship, which was granted May 14.

She spent a few days couch surfing when she got back to New Hampshire. When that was no longer an option, she spent two weeks sleeping in her car. She kept warm by wearing two sweaters, as well as leggings with sweatpants over them, and wrapping herself in her blanket from college. She parked at various truck stops and park-and-ride lots. She regularly skipped breakfast and lunch, and mainly ate cooked rotisserie chicken that she could buy cheaply at the supermarket.

Nicole Newell, the director of counseling at Franklin Pierce, learned about Telfer’s situation and offered a place to stay. Sometimes, she can see Telfer sprinting up the hill outside her window.

“No matter what comes at her, she just keeps moving,” Newell said. “And it’s incredible.”

Though some people have embraced her, Telfer has always felt like an outsider. She receives weird looks in public and death threats on social media, she said, and feels out of place as a Black person in a majority-white community.

Telfer was raised by a single mother and hid her gender dysphoria for fear of being persecuted. She began running track in elementary school in Jamaica, where sports for her age group were not separated by gender. She continued running on men’s teams when her family moved to Lebanon, N.H., the summer before her junior year of high school.

She saw herself as a sprinter, she said, but her coach steered her toward hurdling.

She entered Franklin Pierce in the fall of 2014 and began competing there in 2016 — on the men’s team, though she publicly identified herself as a woman. Telfer stepped away from track for a time in the spring of 2017 after growing uncomfortable with the way others perceived her, and she soon began testosterone suppression.

“They didn’t get that I was a female competing in the sport that I love,” Telfer said about running against men. “They were starting to see me as a gay male athlete running with cisgender men,” she said, referring to those who identify with the gender they were assigned at birth.

At the start of the 2018-19 school year, Telfer said, she walked into her coach’s office with a friend and asked to compete with other women. She expected the coach to balk. Instead, she recalled, he responded: “Finally.”

“Then I started crying, and then my friend started crying,” Telfer said. “It’s like we didn’t know what was going on, and he said, ‘You can compete as CeCe, as yourself, as a girl.’”

Her excitement, she said, was tempered by a backlash. Parents of Telfer’s competitors objected, saying she had an athletic advantage.

College and Olympic sports allow transgender women to compete in women’s divisions so long as they meet various testosterone-suppression requirements. Research on how such hormone treatment affects elite athletes is scant.

Citing supposed competitive advantages, but little evidence that transgender athletes were dominating women’s sports, lawmakers in more than 30 states have introduced bills aimed at barring transgender women and girls from competing on teams that match their gender identity.

Six states — Arkansas, Alabama, Tennessee, Mississippi, Montana and West Virginia — have enacted such laws in the most recent legislative sessions, according to the Human Rights Campaign. Gov. Kristi Noem of South Dakota signed two executive orders that would similarly limit participation; Idaho enacted a law last summer, but it has since been stalled by a federal judge.

“Seeing how the world hated people like me, the dream not only became a reality, but it had a bigger meaning,” Telfer said.

When Telfer came out to her mother over the phone in 2018, she was told she would probably never see her immediate family again.

Larry Leach, who played basketball at Franklin Pierce in the early 1980s and returned as the vice president for alumni affairs while Telfer was a student, became a mentor for her as she navigated life as a student-athlete and grappled with her identity. He stood in the room with Telfer when she came out to her mother.

“Listening and hearing that a mother, under any circumstance, won’t accept a child, was sad for me — for CeCe — because I know how badly she wants her mother’s support,” Leach said in a phone interview. “She gets it from other people, but the longing to just have it from her mother means much more than me giving her support or whoever else giving her support.”

When she is on the track, Telfer sets aside the broader issues and focuses more on the clock and her Olympic dream. She hopes to hit her qualifying time for the trials at a meet in early June.

“I have to really believe that this is going to help me get to the trials,” Telfer said of her training. “When I open my eyes, all I can see is Olympic trials.”