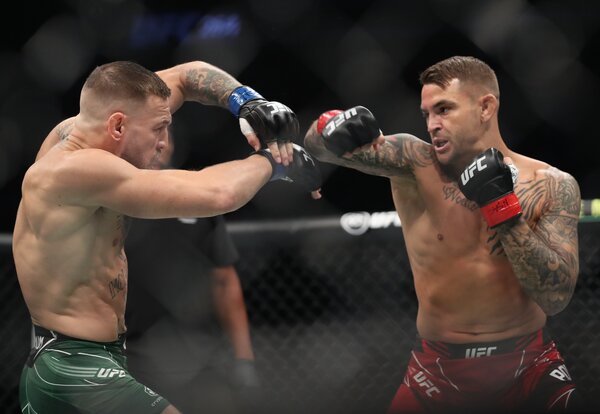 Conor McGregor lost his rematch against Dustin Poirier after a bizarre end to the first round in which McGregor appeared to break either his lower left leg or his ankle. As McGregor and Poirier swung at each other, McGregor stumbled backward and broke a bone without Poirier hitting him.

In a post-fight interview, Poirier said that he believed McGregor fractured his ankle earlier in the fight — when Poirier successfully defended a kick — and that the break was completed when McGregor stumbled backward. McGregor, using unprintable language, disagreed.

“This guy is a dirtbag, man,” Poirier said about McGregor, angry about prefight trash talk that he believed repeatedly crossed the line.

Before the bizarre ending, the fight was a barnburner. McGregor and Poirier came out swinging and kicking, familiar with each other from two previous matchups. Poirier scored a mid-round takedown, and kept McGregor on the ground for most of the rest of the round, landing a flurry of elbows to McGregor’s face that left his ear bloody.

McGregor has now fought four times in the last five years and lost three times, including two in a row to Dustin Poirier. The U.F.C.’s lightweight division is one of its deepest, and with a broken bone and no clear path back to the top, McGregor is foundering.

Poirier will likely fight Charles Oliveira, who was sitting cageside, for the lightweight belt. But given the U.F.C.’s track record for making big-money fights, it is not out of the question that Poirier and McGregor will fight at some point again.