Bobby Unser, a three-time winner of the Indianapolis 500, a record-setter at the Pikes Peak International Hill Climb and a marquee figure in an auto racing family that dates to the 1920s, died on Sunday at his home in Albuquerque, N.M. He was 87.

Bobby, his younger brother Al, and Al Jr., known as Little Al, combined for nine victories in the Indy 500, and Bobby won it in three different decades. He won the points race for the United States Auto Club championship in 1968 and ’74.

Unser conquered a fear of heights to capture the Pikes Peak climb a record 13 times, racing against the clock on a gravel road twisting through more than 150 turns with no guardrails overlooking drops of up to 1,000 feet. The previous Pikes Peak record of nine victories had been held by his uncle Louis.

While carrying on a family tradition, Bobby and Al Sr. drove for different teams.

“It was hard to be family and yet do what we were doing because we kind of rose to stardom together,” Bobby told the Henry Ford Collecting Innovation Today center in Dearborn, Mich., in 2009. But “Al and I didn’t fight,” he said. “We were the closest of friends.”

Bobby Unser was a hard-charging racer whose mementos at his Chama, N.M., ranch included a twisted steering wheel from the time his car slid under a guardrail at a Phoenix race, almost decapitating him. His legs were broken so many times, he lost count.

He developed numerous racecar innovations, going back to the 1950s, when he joined with his father, Jerry, an occasional racer and car builder, in mixing walnut shells with rubber to make tires that would hug the Pikes Peak road.

But the Indy 500 brought tragedy for the Unser family. Bobby’s uncle Joe was killed in a practice run on a highway before the 1929 race. His older brother Jerry Jr., who survived a multicar accident that pitched his car over a wall in the 1958 Indy 500, was killed in a fiery crash while practicing for the 1959 race. 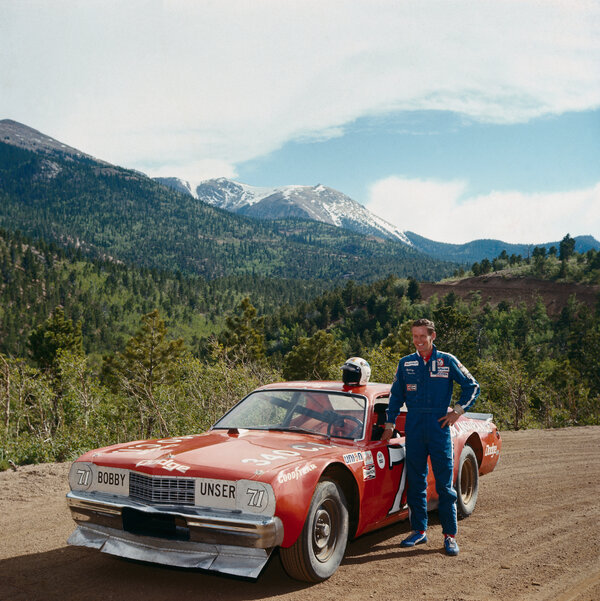 Born in the shadow of Pikes Peak, Bobby Unser grew up in Albuquerque, where his father owned a garage and gas station along Route 66. As a youth he joined with the older Unser twins, Jerry Jr. and Louis, and the youngest brother, Al, in rebuilding a rusted Model A pickup.

Bobby grew determined to race professionally, and he set his sights on Pikes Peak.

“I didn’t have any natural talent when I was young,” he told Sports Illustrated. “But I made it out of sheer stubbornness.”

Unser won at Pikes Peak for the first time in 1956 and captured the race every year from 1958 to 1963, driving in the open wheel category. He won for the last time in 1986, driving an Audi rally car.

He made his Indianapolis 500 debut in 1963 but crashed on the third lap. The next year, he completed only one lap before he was engulfed in a multicar wreck.

Unser won for the first time in 1968, driving a turbocharged piston-engine Eagle-Offenhauser while three heralded turbine-engine cars owned by Andy Granatelli failed to finish. He won the 500 again in 1975, when rain shortened the race to 435 miles.

Unser bested Mario Andretti by 5.3 seconds in the 1981 race, but the next day officials gave the victory to Andretti after penalizing Unser one lap for illegally passing several cars under a caution. Had they imposed the penalty during the race, Unser might have made up the lap and won anyway, since he had the fastest car that season. An appeals panel reinstated Unser as the winner more than four months later but fined his team part of the winning purse.

Robert William Unser was born in Colorado Springs on Feb. 20, 1934. He embarked on his racing career at Speedway Park in Albuquerque as a teenager, driving modified stock cars. He took on the climb to the 14,110-foot-high Pikes Peak summit even though, as he told the Henry Ford center, “the biggest fear that I always had, since I was really young,” was heights.

He gained confidence by driving passenger cars along the edge of the road, and “then I trained my eyes to never look down, always look at the road, look at the mountain.”

Unser’s closest brush with disaster may have come in December 1996 on a snowmobile outing with a friend in the Rockies on the New Mexico-Colorado border when they nearly froze to death in a blizzard. Unser was convicted in federal court of unlawfully operating a snowmobile in a national wilderness area and fined $75.

Unser was a TV color commentator for auto races during and after his racing career, broadcasting for CBS, NBC and ABC.

In his mid-70s, reflecting on his envisioned legacy, Unser said that “people are gonna know that Bobby Unser represents desire.”

He added, “If I could make my body catch up with my head, I’d still be racing today.”