At a news conference on Tuesday, the top basketball executive for the Portland Trail Blazers dodged or deflected questions about a 1997 sexual assault accusation against Chauncey Billups, whom he was announcing as the team’s new head coach. A public relations official for Portland cut off a questioner entirely, and the executive, Neil Olshey, would not elaborate on an independent investigation into the incident he said the team had commissioned.

Billups’s hire has elicited criticism both from within and outside Portland’s fan base because of the accusation, which was made during Billups’s 1997-98 rookie season as a player with the Boston Celtics.

Olshey, the Blazers’ president of basketball operations, introduced Billups on Tuesday and said that he had “been successful at everything he’s done in his life, on and off the court.”

He also said that the Blazers “took the allegations very seriously” and that “other N.B.A. organizations, business partners, television networks, regional networks have all enthusiastically in the past and present offered Chauncey high-profile positions within their organizations.” Billups is currently finishing his first season as an assistant coach with the Los Angeles Clippers, who are in the Western Conference finals, and he was previously an analyst for ESPN.

Olshey said the team-initiated investigation was done with Billups’s support. “The findings of that incident corroborated Chauncey’s recollection of the events that nothing non-consensual happened,” he said. “We stand by Chauncey. Everyone in the organization.” 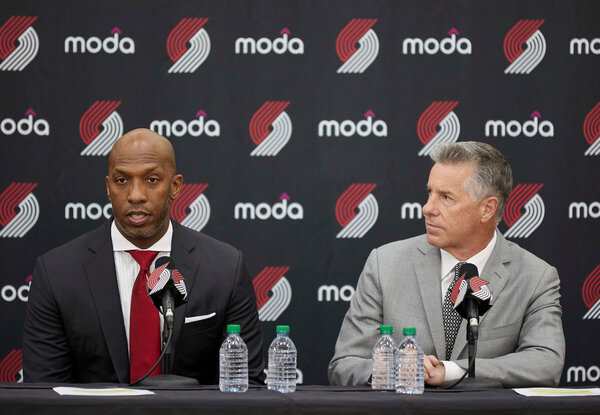 When asked by a reporter to give more details on the investigation, Olshey declined.

“So that’s proprietary, Sean,” Olshey said, referring to the N.B.A. reporter Sean Highkin. “So you’re just going to have to take our word that we hired an experienced firm that ran an investigation that gave us the results we’ve already discussed.”

Jason Quick, a reporter for The Athletic, followed up later to ask Billups about the impact the incident had on him, after Billups had said that “not a day that goes by that I don’t think about how every decision that we make could have a profound impact on a person’s life.” Olshey took a sip of bottled water and appeared to glance at a public relations official for the organization, who then cut off Quick, though Billups appeared willing to respond.

“Jason, we appreciate your question,” the official said. “We’ve addressed this. It’s been asked and answered. Happy to move on to the next question here.”

The 1997 accusation came from a woman who said in a lawsuit that on the night of Nov. 9, following an evening at a Boston comedy club, she was raped by Billups, Ron Mercer and Michael Irvin — who is of no relation to the former N.F.L. player — at Antoine Walker’s home. Walker and Mercer were Billups’s teammates in Boston, while Irvin was Walker’s roommate. No criminal charges were filed. Billups and Mercer settled with the woman for an undisclosed amount in 2000, and Walker also settled a lawsuit with the woman soon after. Billups denied any nonconsensual contact, but said he had sex with her.

The lawsuit did not affect Billups’s career prospects. It rarely came up, if at all. He played 17 years in the N.B.A., made five All-Star teams and won the N.B.A. finals Most Valuable Player Award in 2004.

“I learned at a very young age as a player, and not only a player, but a young man, a young adult that every decision has consequences,” Billups said on Tuesday, in addressing the accusation, “and that’s led to some really, really healthy but tough conversations that I’ve had to have with my wife, who was my girlfriend at the time in 1997, and my daughters about what actually happened and about what they may have to read about me in the news.”

The hiring of Billups immediately spurred a backlash, with the Trail Blazers being accused of glossing over the assault accusation at the expense of more experienced candidates like Becky Hammon, the seven-year San Antonio Spurs assistant who was a finalist for the job. Olshey said more than 20 candidates were considered for the role. Billups’s only coaching experience is this season with the Clippers.

The Billups hiring also has brought criticism on the franchise’s biggest star, Damian Lillard, who spoke glowingly about Billups and publicly lobbied for the team to hire the former point guard Jason Kidd, who was recently hired as the coach of the Dallas Mavericks after working this season as an assistant coach for the Los Angeles Lakers. In 2001, Kidd pleaded guilty to spousal abuse against his then-wife, Joumana Kidd.

On Twitter, Lillard addressed some of the criticism for supporting Kidd and Billups, saying: “Really? I was asked what coaches I like of the names I ‘heard’ and I named them. Sorry I wasn’t aware of their history I didn’t read the news when I was 7-8 yrs old. I don’t support Those things … but if this the route y’all wana come at me… say less.”

At the news conference, Olshey said that Lillard had been “involved in the process” for hiring a new coach and that he attended some of the video conference interviews. According to Olshey, Lillard also spoke to Billups directly before the hire.

“We have different sectors in this organization,” Olshey said. “And, you know, Dame represents the player sector, and we took his input in the process. We value it. It’s important to us to kind of know where he stands. But at the end of the day, this is an organizational decision and the organization believes that Chauncey is the best person to be our head coach.”