PARIS — While other major players juggled practice and media commitments ahead of the French Open, Naomi Osaka focused only on practice this week.

She was on court at Roland Garros early on Friday, hitting with the former No. 1 Angelique Kerber on the red clay, where Osaka does not feel entirely at ease. During breaks, she sat in a chair staring straight ahead as her coach, Wim Fissette, crouched by her side in conversation.

The second-seeded Osaka is tennis’s biggest new star and now the highest-paid female athlete in the world, ahead of Serena Williams. Osaka has won four Grand Slam singles titles, two more than any other woman since 2018. But the French Open, the only Grand Slam tournament played on clay, will be a big challenge. She did not get past the third round in four previous appearances, and so she planned to approach the event differently: Osaka recently announced that, to protect her mental health, she would not “do any press” during the tournament, which begins Sunday.

It remains unclear what her news-media abstention will entail. Osaka, who represents Japan and lives in the United States, is under contract with the Japanese broadcaster Wowow. Will she choose to speak with that network and other broadcasters? Will she give post-match interviews on court? Or will she simply choose to skip the traditional post-match news conference designed to serve a wide variety of outlets?

Answers were not immediately forthcoming, and Stuart Duguid, her agent, declined to comment when asked for clarification. What is clear is that Osaka chose not to take part in the official media day on Friday, which made her the exception. The participants included the women’s No. 1, Ashleigh Barty; the reigning women’s champion, Iga Swiatek; and the 13-time men’s champion, Rafael Nadal. Already an immovable object at Roland Garros, Nadal now has a permanent presence after the unveiling this week of a steel statue of him ripping his trademark forehand.

Nadal and his fellow players addressed numerous topics on Friday, and most were asked about Osaka’s decision. None criticized her choice, but all said they would take a different tack. 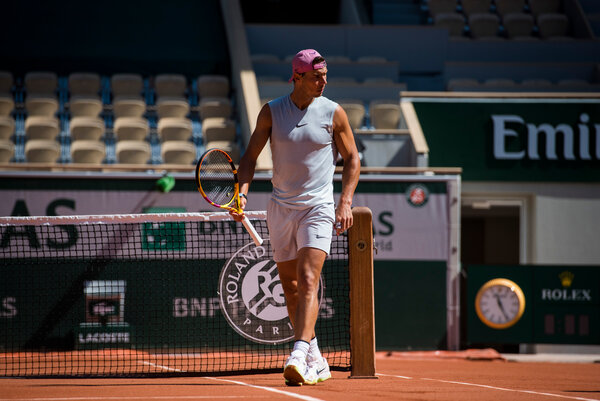 “As sports people, we need to be ready to accept the questions and try to produce an answer, no?” Nadal said. “I understand her, but in the other hand, for me, without the press, without the people who normally are traveling, who are writing the news and achievements that we are having around the world, probably we will not be the athletes that we are today. We aren’t going to have the recognition that we have around the world, and we will not be that popular, no?”

Nadal, who will turn 35 on Thursday, is a creature of habit who began giving interviews as a preteen prodigy. The landscape has changed dramatically since he won his first French Open title in 2005. Athletes now speak through social media, but the surprise announcement from Osaka, 23, is not all about a generation gap.

Barty, from Australia, is 25, and Swiatek, from Poland, is 19. Both are past French Open champions, and both are big stars in their home countries.

“In my opinion, press is kind of part of the job,” Barty said. “We know what we sign up for as professional tennis players. I can’t really comment on what Naomi is feeling or her decisions.”

Worn down by expectations and the intensity of professional tennis, Barty took a nearly two-year break in her career before returning in 2016.

“At times, press conferences are hard, of course, but it’s also not something that bothers me,” she said. “I’ve never had problems answering questions or being completely honest with you guys.”

In a statement on Friday, the WTA emphasized how seriously it took the issue of mental health, but also stressed that media obligations are part of the job.

“The WTA welcomes a dialogue with Naomi (and all players) to discuss possible approaches that can help support an athlete as they manage any concerns related to mental health, while also allowing us to deliver upon our responsibilities to the fans and public,” the statement said. “Professional athletes have a responsibility to their sport and their fans to speak to the media surrounding their competition, allowing them the opportunity to share their perspective and tell their story.”

Swiatek, like the young Canadian Bianca Andreescu, has prioritized the mental side of her game, using sports psychology from an early age and hiring a performance psychologist, Daria Abramowicz, as part of her team.

Swiatek said on Friday that she did not think taking part in news conferences was difficult or had affected her mental health.

“I feel that the media is really important as well because they are giving us, you are giving us, a platform to talk about our lives and our perspective,” she said. “It’s also important, because not everybody is a professional athlete, and not everybody knows what we are dealing with on court. It’s good to speak about that. We have like two ways to do that: media and social media. It’s good to use both of these platforms and to educate people.”

What social media lacks — unless an athlete chooses to regularly answer questions from followers — is dialogue.

Tennis news conferences are not what they used to be. They are generally shorter and much lighter on inquiries about tactics, technique and the match that just finished. But they remain an opportunity for journalists to ask questions on any subject. They also allow a chance for those who report regularly about tennis to develop a rapport with the athletes and better understand their personalities, psyches and, as Swiatek smartly alluded to, their motivations and intentions.

“While it’s important that everyone has the right to speak their truth, I have always believed that as professional athletes we have a responsibility to make ourselves available to the media,” King wrote in an email. “In our day, without the press, nobody would have known who we are or what we thought. There is no question they helped build and grow our sport to what it is today. I acknowledge things are very different now with social media and everyone having an immediate ability to speak their truth. The media still play an important role in telling our story. There is no question that the media needs to respect certain boundaries. But at the end of the day, it is important we respect each other and we are in this together.”

It is true that some of the world’s most prominent athletes do not give postgame interviews as a matter of course. Soccer players in Europe’s top leagues generally grant limited access. But top tennis players are hardly alone in speaking after every match. Star golfers usually are interviewed after each round. Top track and field athletes and Alpine skiers do interviews after each race. The Jamaican sprinter Usain Bolt, now retired, would win in less than 10 seconds and then spend half an hour or more running a gantlet of television, radio and print journalists.

Osaka, with her long list of sponsors, has many new commercial partners who have a stake in her maintaining a high profile. But she already gives very few individual interviews and has reached a level of celebrity that she can probably maintain through social media, her sponsors and coverage of her matches.

Osaka is subject to a fine of up to $20,000 for each news conference she skips at Roland Garros. She explained in her announcement that she had seen many instances of players breaking down after a loss in the interview room. She said that players were often asked questions that “bring doubt into our minds, and I’m just not going to subject myself to people that doubt me.”

The doubts are legitimate, however, when it comes to her clay-court results.

Osaka, who will play her first-round match on Sunday against Patricia Maria Tig, is a great hardcourt player but not yet a proven threat on clay or grass. She has won two United States Opens and two Australian Opens, all on cushioned acrylic hard courts. On clay, she has a career singles record of just 19-16 and has yet to reach a tour final. After winning the U.S. Open in 2020, Osaka skipped the French Open, which was postponed to September and October because of the pandemic. This year, in her only tournaments on clay, she lost in the second round and then in the first.

“Her challenges are lack of confidence with sliding and movement, and her shots don’t carry as much weight on clay as on a hard court,” said Pam Shriver, the ESPN analyst who was a U.S. Open finalist in 1978. “Her serve is also not as much of a weapon.”

Osaka, who tends to aggressively rip her returns, is prone to making more errors on clay than on hard courts, where the bounces are true and shots are easier to time correctly. Players like Swiatek and Barty get more net clearance on their groundstrokes than Osaka, and Barty can change pace and trajectories more effectively with her crisply sliced backhand.

But power players with relatively flat groundstrokes and sliding issues have solved the claycourt riddle, particularly Maria Sharapova, who once derided herself as a “cow on ice” on the surface but ultimately won two French Opens.

“It takes time to develop, and it takes many hours on the practice courts for you to feel that your weight is underneath you on clay,” said José Higueras, the veteran coach who guided Michael Chang and Jim Courier to French Open titles. “If you hit exactly the same ball on a hardcourt that is a pretty decent shot, on clay it may not be that decent, because the other player has a little more time to adjust.”

On Sunday, Osaka will try again to adjust her game in Paris. Win or lose, she plans to skip the news conference, and though her decision has stirred resistance, it will also stir reflection.