Relegated to a part-time role for a basement-dwelling team, Albert Pujols — the man they used to call The Machine — stepped to the plate in the fifth inning of Friday’s face-off between the Angels and the Texas Rangers. The 40-year-old fell behind in the count, 1-2, before taking a mighty cut at a 91-mile-per-hour fastball, sending it 387 feet into the left field stands for his fifth home run of the season and the 661st of his career, passing Willie Mays for the fifth most in major league history.

The only cheers in Angel Stadium came from the park’s loudspeakers, as no fans were in attendance because of coronavirus precautions. That left the rooting to come from Pujols’s teammates, including Mike Trout, who years ago took the baton from Pujols as the game’s most valuable active player, and under the aging slugger’s guidance has, for some, become the rightful heir to Mays himself as the sport’s top all-around talent.

For Pujols, unquestionably one of the greatest hitters to ever set foot in a batter’s box, passing Mays’s famous total was another feather in a cap that already has many. But while Pujols’s career numbers rank among the sport’s best — his totals are eerily close to players like Alex Rodriguez and Mays — his sharp decline since leaving St. Louis after 2011 illustrates how even the most celebrated careers can take wildly different trajectories.

But, first, it is important to sum up just how incredible his career has been.

An easy way to understand Pujols’s massive impact is to look at where he stands among his contemporaries. He leads all active players in games, plate appearances, at-bats, runs, hits, doubles, home runs, runs batted in, walks, total bases, sacrifice flies and intentional walks.

He won three Most Valuable Player Awards, was the best player on two World Series-winning teams, and is one of just 20 position players in baseball’s modern era to accumulate 100 wins above replacement, or WAR. Earlier this season, he passed Alex Rodriguez for third place on the career R.B.I. list, with his 2,097 entering Friday trailing only Hank Aaron (2,297) and Babe Ruth (2,214).

He’s one of just four players — Aaron, Rodriguez and Mays are the others — to have 3,000 hits and 600 home runs. By Jay Jaffe’s career-evaluation tool, JAWS, which attempts to account for a player’s peak in addition to his total output, Pujols’s incredible stretch from 2003 to 2009 pushes him past the Hall of Famer Jimmie Foxx, making him the second-best first baseman in baseball history, trailing only Lou Gehrig.

In other words, there is no way to look at Pujols’s career and not conclude that he’s a first-ballot Hall of Famer.

But if you just look at his totals, and his outrageous peak, you miss a steep and prolonged decline, one that essentially cleaves his career into two distinct chapters: living baseball god for the St. Louis Cardinals and something far less than that for the Angels. His on-field deterioration over the last nine seasons has been a bit more stark alongside Trout, who many feel has a chance to eventually be considered Mays’s true successor as the game’s greatest all-around player.

Pujols’s dropoff was never more apparent than the 40-day wait between his 659th and 660th home runs, where the struggling team began exploring other options at first base.

This would have been nearly impossible to believe when Pujols signed with the Angels for 10 years and $240 million before the 2012 season. At that point it seemed that he would be Los Angeles’s cornerstone for at least the next several seasons. He was already 32, but to that point his career lows were 5.3 WAR, 34 home runs and 99 R.B.I. He’d batted below .300 just once and had an on-base plus slugging percentage below 1.000 just three times.

“I can’t say that in my wildest dreams I thought we’d be sitting here today,” Jerry DiPoto, then the general manager of the Angels, said enthusiastically at the time of the signing. 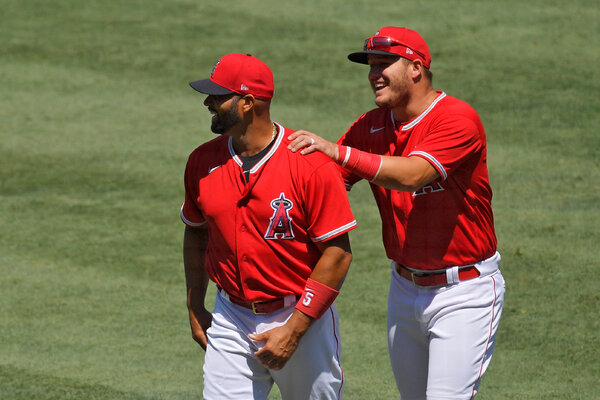 Not quite nine seasons later, Pujols’s career batting average — weighed down by a .257 mark for Los Angeles — has dropped to .299. His career O.P.S. over that time period has dropped by more than 100 points. His team has made the playoffs just once — they were swept in the division series — and his position among the all-time greats has not reached the heights most people expected.

While WAR is by no means a perfect measure of a player’s value, the fact that Pujols piled it up with such ease in St. Louis, only to have the measure almost entirely devalue his tenure in Los Angeles, is perhaps the best way to sum up his unusual career.

Early on, Pujols was as consistent as he was prolific. At his peak, he produced seven consecutive seasons of 8 or more WAR, tying a record set by Babe Ruth (1926 to 1932) and matched by Mays (1960-1966). Trout, for what it’s worth, has yet to reach that mark in even three consecutive seasons.

The difference after their 11th seasons, however, is stark.

Bonds, who had his career tainted for many by a connection to performance-enhancing drugs, nearly matched his first 11 years with 79.2 WAR over his next 11. Ruth, thanks to his conversion to a full-time position player, had more WAR after his 11th season (86.1) than he did before. And Mays, through sheer consistent brilliance, managed 68.9 over his final 11 seasons.

In all, the 19 100-WAR position players other than Pujols averaged 52.2 WAR after their 11th season. The sharpest decline, to this point, was by Mickey Mantle, who through injuries and poor self-care went from 84.7 WAR in his first 11 seasons to 25.5 after.

And just like batting average, career WAR can decrease. Thanks largely to a difficult 2017 season, Pujols has seen his career total decline by 0.6 WAR over the last four years, putting him in jeopardy of falling out of the 100-WAR club entirely should he continue to scuffle through this year and next, when Los Angeles owes him $30 million in the final year of his contract.

Would dropping below 100 WAR take away Pujols’s status as an all-time great? Absolutely not. He is a player to be celebrated for a peak that was positively Mays-like and is, if anything, underappreciated. And his durability is nothing if not commendable.

But his journey should also serve as a reminder that baseball careers do not all follow the same path. So when we look at a player like Trout, and see that at 29 he is already up to 73.9 WAR, we should be careful to not project a similar pace too far into the future. He could have a 20-season career of total dominance, like Mays and Aaron, or he could follow a path more similar to Mantle’s or Pujols’s.

Either way, Pujols and Trout can laugh about it together some day on a stage just outside Cooperstown, N.Y., once Trout inevitably joins Pujols as a Hall of Famer. The details of how they got there won’t seem as important then.