The Islanders and their fans have a second chance to say farewell to Nassau Coliseum.

They thought they had said goodbye in 2015, but after playing in Brooklyn full time, then part time, the team returned to its Long Island roots after an arena renovation, culminating in this year’s playoffs.

Before they move next season to a new arena at Belmont Park, the Islanders are hoping for a final deep postseason run in their original arena, which was home to four consecutive Stanley Cup-winning teams from 1980 to 1983.

The Coliseum was devoid of fans for nearly two months in this condensed season before a small percentage of devotees could attend. 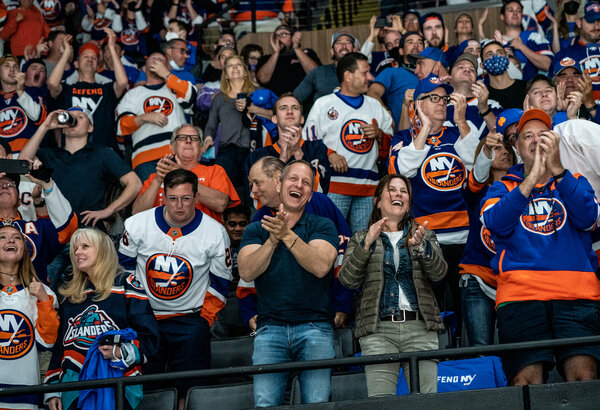 But with relaxed protocols and growing Covid-19 vaccination rates, 6,800 fans — just under 50 percent of the arena’s 13,917 capacity for hockey — were welcomed to Games 3 and 4 of the Islanders’ first-round N.H.L. playoff series against the Pittsburgh Penguins.

Back-to-back wins, including a double-overtime victory on a Josh Bailey goal on Monday in Pittsburgh, have given the Islanders a chance to clinch a playoff series at Nassau Coliseum for the first time since 1993. They lead the first-round series, 3-2, and Game 6 on Wednesday will take place in front of even more fans, as the allowable capacity was expanded to about 9,000 on Tuesday, with more sales of seats to vaccinated spectators.

“It will be louder,” Islanders Coach Barry Trotz said Tuesday. “It will be a great atmosphere.”

The crowd’s roar made it worthwhile for fans who saw their team make the conference finals last year for the first time since 1993 but had waited more than a year to see the team in person.

“The Coli is my favorite place in the world for a reason. It’s hard to explain to non-Islanders fans how amazing it is to be a part of this crowd,’’ said Sydney Bunshaft, 25, who watched Game 3, a Penguins victory, with her father, Al, from behind the Islanders’ bench. “It gave me chills to hear it so loud again.”

Fans were seated in vaccinated and unvaccinated sections of the arena, creating an unusual sensory feeling of hearing uneven crowd reaction from each side of the building.

Bailey, the team’s longest-tenured player, was serenaded by the fans with his own song and broke a scoreless tie in Game 4, the 125th playoff game at the Coliseum, which opened in 1972.

The frenzied scene was augmented by a cadre of Jets players, including the rookie quarterback Zach Wilson and members of his offensive line, who wore blue Islanders jerseys and exhorted the home team.

“It felt like a full house because we were so used to playing without fans,’’ Islanders forward Jean-Gabriel Pageau said Sunday. “The noise was just crazy.”

Most fans said they were thrilled to finally gather in person for games after months of pandemic-related restrictions. There was also gratitude that the path to UBS Arena, scheduled to open in the fall, had a vastly different feeling than the sadness that enveloped the fan base before the team left for Brooklyn.

After winning Game 6 of a 2015 first-round series against the Capitals — who were coached then by Trotz — the Islanders lost Game 7 in Washington, and a silent Coliseum was left behind.

Brooklyn didn’t quite work, though the team won a playoff series there in 2016. Players and their families continued to live on Long Island, close to where the team continued to practice in East Meadow, N.Y. Attendance waned at Barclays Center, a building not fashioned for hockey, and fans began to clamor for a return to Nassau County.

“We were at the first last regular-season home game in 2015, and we thought that was saying goodbye,’’ said Ashleigh Campbell, 36, who attended Saturday’s game with her husband, Keith, and sons, Charlie, 5, and Matthew, 21 months. “Then Brooklyn was a hot mess; it was not sustainable. Now we can all look forward to Belmont. The Islanders are getting a facility they deserve, but it’s always sad to say goodbye.”

For Patrick Dowd, 60, widely known among Islanders fans because of the handmade signs he has been displaying at games for decades, the team’s next step is palatable because it will remain on Long Island.

“I’m OK with it because I know there’s a good future,’’ said Dowd, who held a sign reading, “Close the Barn With 5th Cup,” in stenciled capital letters, on one side. “I love this building and its history. I came here in 1972 with my dad when I was 12 years old. This building has so much meaning for everybody.”

After splitting time between Brooklyn and Long Island for two seasons, the Islanders returned for this shortened, 56-game campaign with every home game at their original base. They made the playoffs as the No. 4 seed in the East Division, partly off the strength of their 21-4-3 record at home.

The fans hope the series against Pittsburgh is only the beginning.

“I’m excited the building has a chance to go out with a bang,’’ the superfan Tom LoFaso said. “I just hope it gets to last longer than last time.”