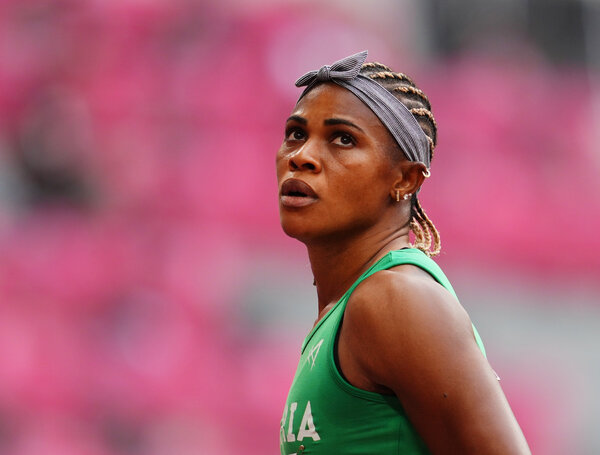 Track and field’s drug testing agency temporarily suspended a Nigerian sprinter after a failed drug test, the first drug-related suspension of an active athlete at the Tokyo Games.

In a statement, the Athletics Integrity Unit, which runs the antidoping program for the sport, said that a sample collected from the sprinter, Blessing Okagbare, during an out-of-competition test on July 19 had tested positive for growth hormones. Okagbare, 32, won her opening heat in the women’s 100 meters on Friday in 11.05 seconds and had been scheduled to run in the semifinals on Saturday.

Okagbare’s suspension was the not the first testing-related problem for Nigeria’s track and field competitors at these Games.

On Thursday, the Athletics Integrity Unit declared 20 Olympic track and field athletes ineligible to compete because they had not met out-of-competition testing requirements leading up to the Olympics. Of the 20 athletes, 10 were from Nigeria.

The Athletic Federation of Nigeria, the governing body for sports in the country, issued a statement attributing the problem to an administrative failure and not to any positive tests for banned substances. The athletes were declared ineligible to compete because they had not completed the required three out-of-competition tests, the organization said.

“The A.F.N. bears responsibility for any lapses that may have occurred during the process and reassures Nigerians that our performances will not be negatively impacted,” the organization said.

In a separate statement, the country’s ministry of sport also clarified that none of the 10 athletes in question had tested positive for a banned substance.