In 2020, the French Open was played in October, rescheduled because of the coronavirus pandemic. Now, back in the usual spring slot and with friendlier weather, the red clay welcomes a full field. The first round of play is spread across three days of competition, with plenty of excellent matches to watch.

Here are some matches to keep an eye on.

Because of the number of matches cycling through courts, the times for individual matchups are estimates and may fluctuate based on when earlier play is completed. All times are Eastern.

Naomi Osaka, the second seed, has won the previous two Grand Slam events that she has played, the United States Open in 2020 and the Australian Open in February. In between, she passed on the fall edition of the French Open, watching from home as Iga Swiatek swept through the field to win her first Grand Slam. Osaka’s powerful baseline play has never fared well on clay. She has never reached the final of a clay court tournament, and has never made it past the third round at Roland Garros.

Patricia Maria Tig, ranked No. 63, has never made it to the second week of a Grand Slam event, but her only WTA Tour title came on clay at the Istanbul Open in 2020. A back injury forced Tig to the sidelines in 2018, but she has worked her way back up the rankings. For Tig to cause a first-round upset, she will have to exploit Osaka’s discomfort on clay and keep her from settling into a rhythm that allows Osaka to rely on her blazing forehand. 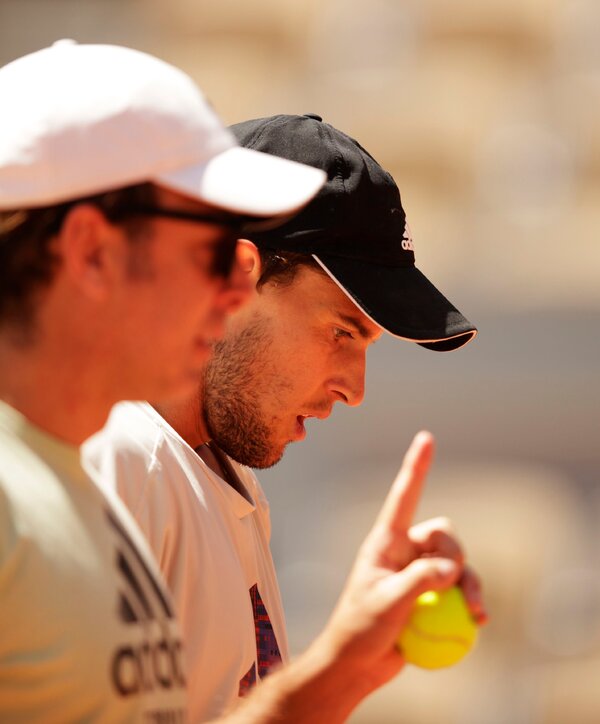 Dominic Thiem, the fourth seed, has reached the final of the French Open twice before, losing on both occasions to Rafael Nadal. Recently, however, Thiem has demonstrated unusually poor form. When asked about the potential for a deep run, he said, “I think the way I’m coming into that tournament, the way I also played the past weeks, the only thing I can focus on is the first round, I shouldn’t focus at all on who is in my quarter or even who is in my half.”

Pablo Andujar may be the perfect opponent for the occasion. Andujar, ranked No. 68, is a clay court specialist, with all nine of his ATP finals, including four titles, coming on the surface. Last week, he beat Roger Federer in the second round of the Geneva Open before reaching the semifinals where he lost to the eventual champion, Casper Ruud.

The five-set format of the Grand Slam tournaments significantly favors Thiem. Even if he is struggling, Thiem will have a lot of time to adjust to Andujar’s grinding style of play. Longer points will allow him to establish a steadier rhythm.

Some matchups seem to be pulled from previous eras. When longtime tennis fans see them in the early rounds of a Grand Slam, they feel joy that only a matchup heavy with history can offer.

Victoria Azarenka and Svetlana Kuznetsova are both two-time Grand Slam champions who debuted on the WTA tour in the early 2000s. They have faced each other 10 times over the past 14 years, and each is deeply familiar with the arsenal of shots that they will need to overcome.

However, neither has played extensively on clay before the French Open. Azarenka withdrew from the Madrid Open in the second round, citing fitness issues, while Kuznetsova has not played a single clay court event this year. This match may come down to who can most quickly adapt their powerful baseline shots to the crushed red brick of Roland Garros.

Fabio Fognini, the 27th seed, is a volatile player. At last year’s French Open, Fognini lost in the first round but has reached the round of 16 in three of his last six Grand Slam events. Often, his matches can be decided by his intensity; a double-edged sword that can produce wild unforced errors or powerful forehand winners.

Gregoire Barrere received a wild-card entry into the French Open, a perk that pleases each of the national federations that host a Grand Slam event. Barrere, ranked No. 122, has never been past the second round of a major tournament, understandable for a player who has often had to push through qualifying rounds.

While Fognini will be heavily favored, a home crowd rooting against the Italian may unsettle him. At the least, it should be an entertaining match with plenty of spectator spirit. Fan capacity will be at 35 percent over the first 10 days of the tournament, and will increase to 65 percent for the quarterfinals and beyond.

Here are a few more matches to keep an eye on.