NEW YORK (Reuters) – New York and six other Northeastern states on Thursday extended coronavirus stay-at-home orders to May 15, as President Donald Trump issued new federal guidelines for a cautious reopening of the economy in keeping with advice from leading public health authorities.

The president, who had pressed to restart idled businesses as early as May 1 and had declared “total” authority to do so, settled instead for a phased-in, science-based strategy, heeding warnings from infectious-disease experts that easing social distancing too soon would invite disaster.

“We are not opening all at once, but one careful step at a time,” Trump told reporters at a White House briefing where the plan was unveiled.

Trump’s move to adopt recommendations, rather than orders, also averted a looming confrontation with governors, many of them Democrats, who insisted it was up to them to decide how and when to relax stay-at-home orders they themselves had imposed since last month.

The governors have cited the apparent success of their directives in curbing the spread of the virus, which has killed more than 33,000 Americans in a matter of weeks, while acknowledging the measures have wreaked economic havoc.

At least 668,000 people to date have tested positive in the United States for COVID-19, the highly contagious lung disease caused by the novel coronavirus that emerged from China at the end of last year.

Lacking a vaccine to contain the pandemic, 42 of the 50 states have ordered residents to remain indoors except for necessary outings, such as grocery shopping or doctor’s visits, while closing schools, universities and non-essential businesses.

The unprecedented measures have stifled large swaths of the economy, throwing some 22 million people out of work, upending financial markets and leading to forecasts that America is headed for its deepest recession since the economic collapse of the 1930s.

Trump, a Republican who had staked his November re-election bid on the strength of the U.S. economy, had come under mounting pressure from allies to forge ahead with a swift reopening, despite medical experts who said doing so risked reigniting the outbreak just as it was being brought under control.

The guidelines Trump unveiled at the White House after previewing them in a video conference with governors call for a three-phase process of restarting economic activity, but only after states record a 14-day “downward trajectory” in their coronavirus cases after each phase.

The plan also recommends that hospitals institute a “robust testing program” that includes antibody screenings for healthcare workers before restrictions on businesses and social life are lifted.

The guidance says the recommendations are “implementable on a statewide or county-by-county basis at governors’ discretion.”

In the first phase, public venues such as restaurants and movie theaters could operate again with strict social distancing. Non-essential travel can resume, schools can reopen, and sporting arenas can operate under “moderate” physical distancing during phase two, while visits to nursing homes and unrestricted staffing at businesses can resume during phase three.

Some states with relatively few cases could begin phase one almost immediately.

“They will be able to go literally tomorrow,” Trump said at the briefing. 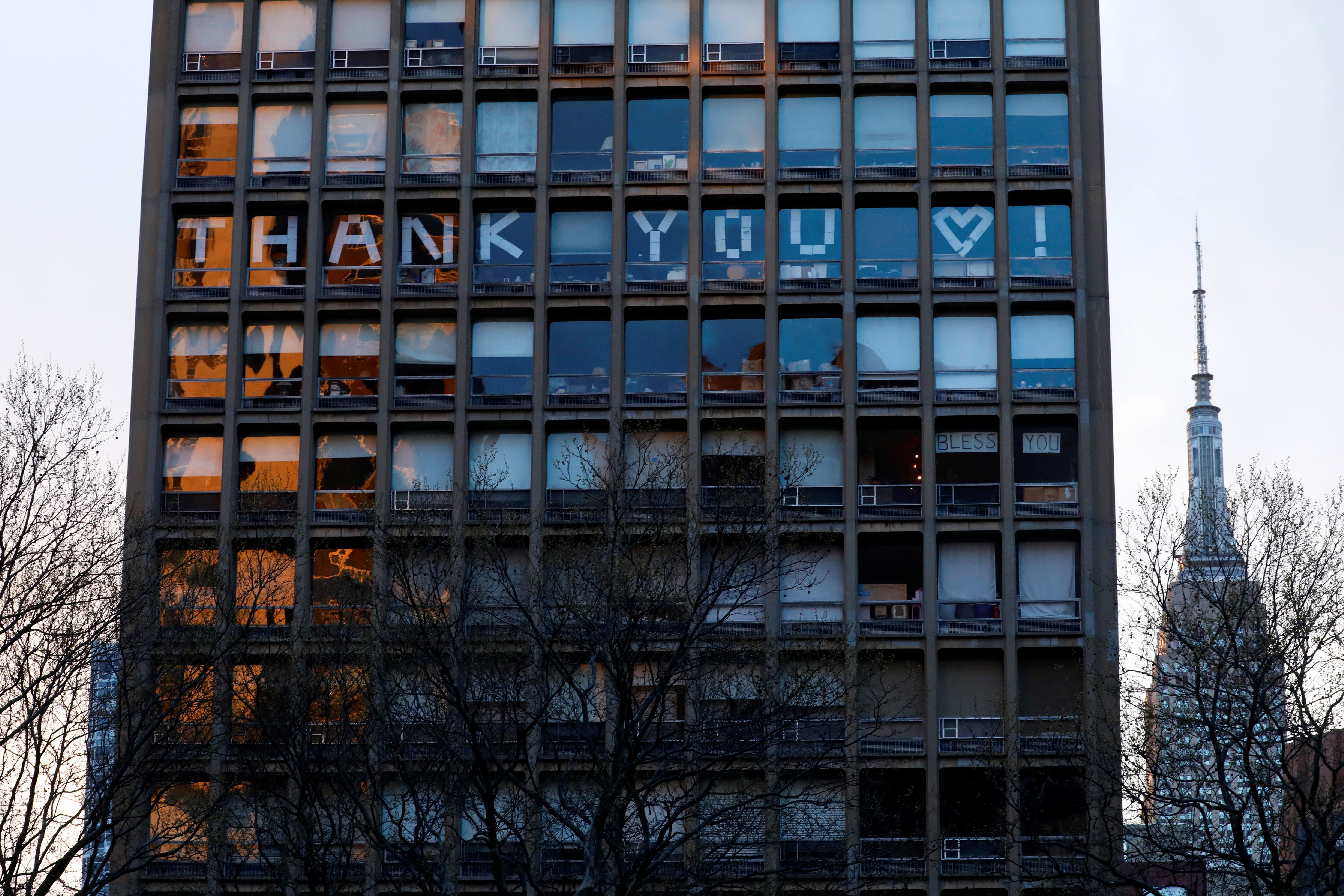 Governors in a handful of states this week began talking about reopening their economies as early as May 1, including North Dakota, Ohio and Tennessee. Eighteen states have recorded fewer than 100 deaths from COVID-19.

Governors elsewhere began formulating their own plans. Seven East Coast states that banded together in a regional pact – New York, New Jersey, Connecticut, Pennsylvania, Delaware, Massachusetts and Rhode Island – said their restrictions would remain intact through the middle of next month. Seven Midwestern governors and three on the West Coast have announced similar pacts for coordinated reopenings.

New York ordered its extension even though the rate of new hospitalizations and other key metrics point to an ebbing of the outbreak, following weeks in which the healthcare network of New York City, the nation’s largest metropolis, was strained almost to the breaking point.

The emergency room at Mount Sinai Hospital in Manhattan has become quieter in recent days but an onslaught continued in the intensive care unit, where some patients had died while waiting for beds to open up, one nurse told Reuters, speaking on condition of anonymity.

“For 12 hours, you don’t eat, you don’t pee, you’re just running around putting out fires from one end of the unit to the other,” she said.

Public health experts say a major expansion of testing to determine the full scope of the pandemic, track new infections and gauge the extent of any “herd” immunity in the general population is necessary before social distancing restrictions can safely be relaxed.

Trump’s new guidelines make it clear that role is the responsibility of state and local governments.

Washington state Governor Jay Inslee, a Democrat, said Trump’s plan accorded with his own guidelines for a phased approach and he welcomed the president’s recognition that state leaders have the final say. 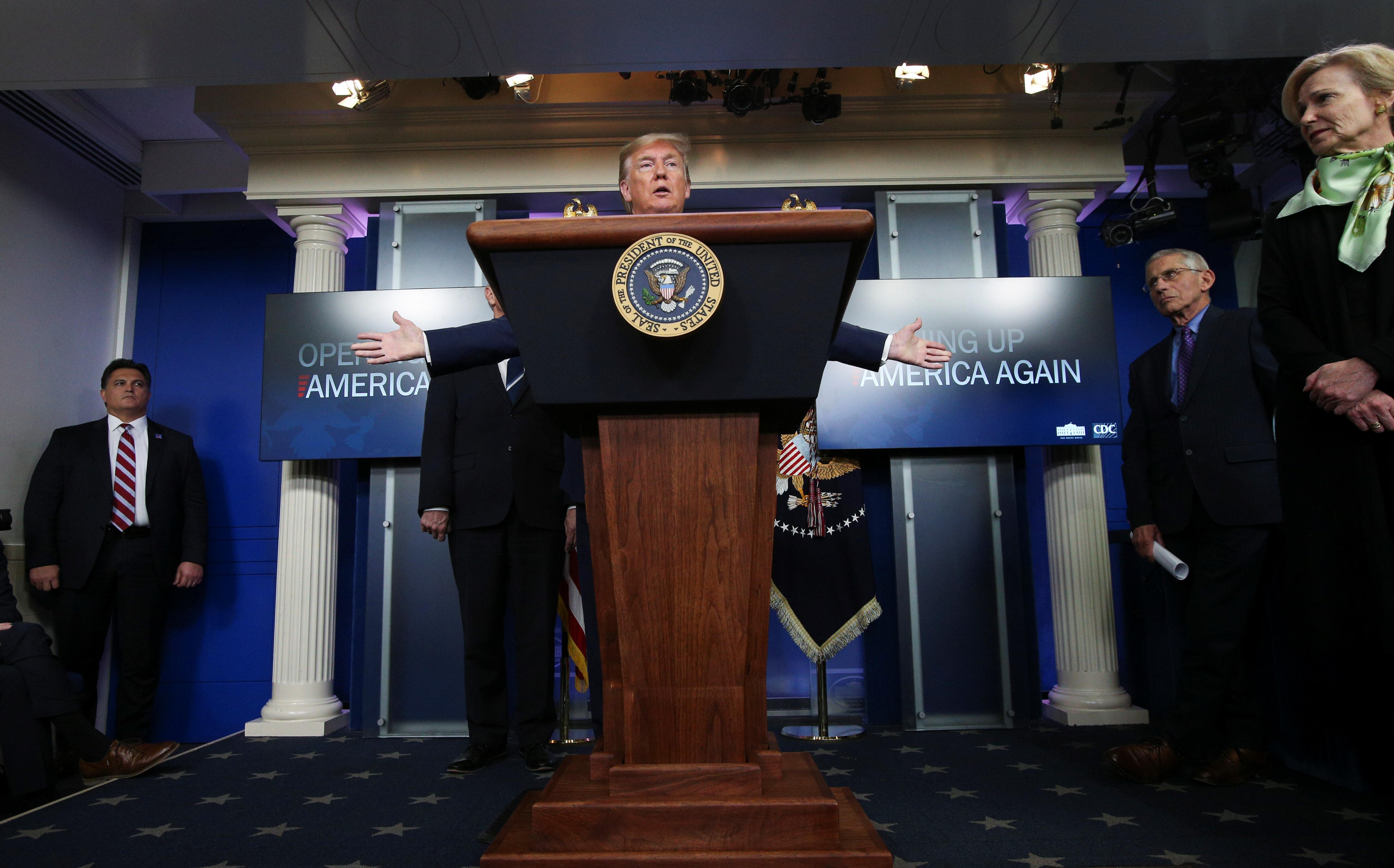 But the top Democrat on Capitol Hill, Nancy Pelosi, speaker of the U.S. House of Representatives, called the federal guidance “vague and inconsistent,” saying it “does nothing to make up for the president’s failure to listen to the scientists and produce and distribute national rapid testing.”

Even within states, urban areas have so far been hit harder than rural areas, a divide that has inflamed political and social divisions and prompted protests against state leaders who opted to keep residents at home.

In Richmond, Virginia, about 30 people gathered outside the state Capitol on Thursday in defiance of a stay-at-home order that the Democratic governor has instituted until June 10.

“STOP the MADNESS! It’s just a COLD VIRUS! End the shutdown for the GOOD of US all!” one of the demonstrators’ signs read. The state has recorded nearly 7,000 cases and 208 deaths.