After meeting with company representatives, officials said the decision would depend partly on data on infections in vaccinated people that cause serious disease or hospitalization. 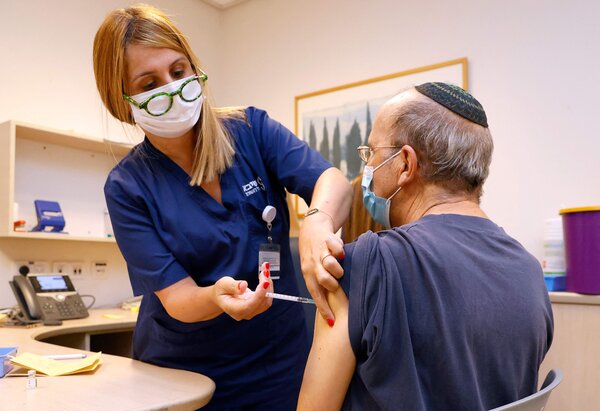 Representatives of Pfizer met privately with senior U.S. scientists and regulators on Monday to press their case for swift authorization of coronavirus booster vaccines, amid growing public confusion about whether they will be needed and pushback from federal health officials who say the extra doses are not necessary now.

The high-level online meeting, which lasted an hour and involved Pfizer’s chief scientific officer briefing virtually every top doctor in the federal government, came on the same day Israel started administering third doses of the Pfizer-BioNTech vaccine to heart transplant patients and others with compromised immune systems. Officials said after the meeting that more data — and possibly several more months — would be needed before regulators could determine whether booster shots were necessary.

The twin developments underscored the intensifying debate about whether booster shots are needed in the United States, at what point and for whom. Many American experts, including Dr. Anthony S. Fauci, President Biden’s chief medical adviser for the pandemic, have said there is insufficient evidence yet that boosters are necessary. Some, though, say Israel’s move may foreshadow a government decision to at least recommend them for the vulnerable.

Pfizer is gathering information on antibody responses in those who receive a third dose, as well as data from Israel, and expects to submit at least some of that to the Food and Drug Administration in the coming weeks in a formal request to broaden the emergency authorization for its coronavirus vaccine.

But the final decision on booster shots, several officials said after the meeting, will also depend on real-world information gathered by the Centers for Disease Control and Prevention about breakthrough infections — those occurring in vaccinated people — that cause serious disease or hospitalization.

And any recommendations about booster shots are likely to be calibrated, even within age groups, officials said. For example, if booster shots are recommended, they might go first to nursing home residents who received their vaccines in late 2020 or early 2021, while elderly people who received their first shots in the spring might have a longer wait. And then there is the question of what kind of booster: a third dose of the original vaccine, or perhaps a shot tailored to the highly infectious Delta variant, which is surging in the United States.

“It was an interesting meeting. They shared their data. There wasn’t anything resembling a decision,” Dr. Fauci said in a brief interview Monday evening, adding, “This is just one piece of a much bigger puzzle, and it’s one part of the data, so there isn’t a question of a convincing case one way or the other.”