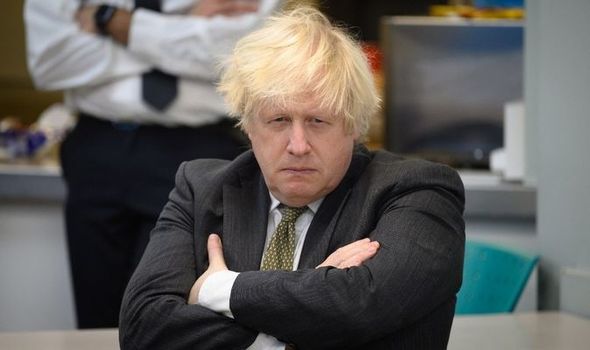 MPs demanded a clear-out of No 10 backroom staff and a return to the “old Boris” who had his finger on the nation’s pulse. Conservatives have said MPs were “frustrated and annoyed” but not yet “mutinous”.

MPs have called for a Willie Whitelaw-style fixer to head operations and stop careless errors by Downing Street officials.

“They [MPs] are looking for him to come back after Christmas with a programme for government, to sharpen up the operation at No 10, to stop having all of these own goals and burning political capital.

“The party is looking for a bit of bloody grip. And if they see that, they might hold off. But I think the Prime Minister has been put on warning by his MPs.”

Tory party chairman Oliver Dowden admitted: “Voters in North Shropshire were fed up and they gave us a kicking. I think they wanted to send us a message and I want to say, as chairman of the Conservative Party, we’ve heard that loud and clear.

“We need to get on with delivering the job and that’s precisely what we’re doing.”

He said: “Get Brexit done: he’s delivered on it. We’ve delivered the fastest booster programme in the world twice over and we’ve seen the economy through this terrible period, with unemployment lower than when we entered. So I think actually, on the big calls the Prime Minister has the vision and the direction to get us through this difficult period.”

And weeks of sleaze and lockdown rule-breaking claims have fuelled anger among backbenchers. One MP said a leadership challenge now would look “vain and out of touch”, but warned questions will be asked if the trend continues over the next six months.

Others said the party had shifted too far away from Conservative values such as keeping taxes low.

A senior Tory said the Prime Minister must start listening to the party and needs a trusted fixer by his side in the way Willie Whitelaw supported Margaret Thatcher.

Lord Whitelaw, who died in 1999, was Mrs Thatcher’s de facto deputy and her key aide and fixer.

Tories feel there is “no obvious” candidate to replace Mr Johnson – Foreign Secretary Liz Truss is little known by voters and Chancellor Rishi Sunak has been dented by raising tax to pay for social care.

He said voters “wanted to send a very clear message to Downing Street that they were dissatisfied with the management of this Government”. He added: “I think that the Prime Minister is now in ‘last orders’ time.

“Two strikes already, one earlier this week in the vote in the Commons and now this. One more strike and he’s out.”

Sir Charles Walker, vice chairman of the 1922 Committee of Tory backbenchers, said a leadership contest would be “completely self-indulgent” but believed Mr Johnson had 12 months at most to “sort himself out”.

He said: “If we go on making unforced errors over the next three to six months or nine months, it will become a lot more serious.”

Sir Geoffrey Clifton-Brown, treasurer of the 1922 Committee, said it was not the time for a “big blame game”.

But he said: “As one of his seasoned backbenchers, I am asking him to think carefully how he governs the country and avoid these self-inflicted measures.”

Tories are shaken to their core, says LEO McKINSTRY

The loss of North Shropshire has shaken the Tories to their core. At 34 per cent, the swing was one of the biggest against a governing party since the war.

When the Liberal Democrats can achieve such a result in a previously rock-solid Conservative seat, where more than 60 per cent of voters backed Leave in the 2016 Referendum, then vast swathes of true blue territory must now appear to be in danger.

What makes this humiliation all the greater is that the wound was entirely self-inflicted.

The by-election was caused by the futile, reckless attempt of the Government to get the disgraced MP Owen Paterson off the hook after he was caught in flagrant breach of lobbying After this shabby manoeuvre failed, Paterson resigned, but Boris Johnson’s problems only worsened, as he was engulfed by attacks over the ethics of his Downing Street regime and his Government’s competence, particularly over its response to Covid.

When David Cameron was Prime Minister he swallowed up, then crushed the Liberal Democrats through his skilful political tactics. Now Boris Johnson has dramatically revived them through his own mismanagement.

The Shropshire rout follows the recent surprise victory for Sir Ed Davey’s party in the Buckinghamshire seat of Chesham and Amersham. But that was a less spectacular triumph because the Tory majority was smaller there, the Remain cause was strong and there was local anger over damage to the green belt from the HS2 rail link. In contrast, no burning issue gripped this week’s by-election beyond Boris Johnson’s leadership.

Concerned for their own seats, Tory MPs will be asking if he is now a liability, having been such a winner in the past. But they need some sense of perspective.

In 1958, the Tories lost the Rochdale by-election – the first ever contest to be televised – when their vote collapsed yet Harold Macmillan gained a majority of more than 100 at the next year’s general election. Similarly, Margaret Thatcher saw a 19,000 Conservative majority obliterated by the SDP at Crosby in 1981, but she won a nationwide landslide two years later. Tony Blair lost Brent East to the Liberal Democrats in 2003 but easily won the next general election, while Cameron triumphed in 2015 with an overall majority after losing the Clacton by-election to Ukip on a record-breaking 44 per cent swing.

Whether Boris Johnson recovers depends on his next steps.

Public trust in him may be at a low ebb but he has in the past proved to be the great political escapologist, buttressed by a unique instinct for survival. To come through the present crisis, he must rebuild his authority with both the party and the country.

Probably the most urgent task is to end the dysfunctional chaos in Downing by bringing in a veteran operator with qualities of shrewdness, toughness and loyalty. The present team is too inexperienced, too unwilling to challenge Boris. It is often likened to a court rather than a political machine.

The Prime Minister should also strengthen his Cabinet by bringing in some more heavyweights. It is ridiculous that figures like Jeremy Hunt and Greg Clark, both solid ministers, are on the backbenches.

And he should stop pandering to the progressive woke agenda and instead adopt a distinctively Conservative strategy. That means tackling illegal immigration, getting tough on crime, lowering taxes and standing up for traditional British liberties. The more the social justice brigade denounce him, the more he will know he is winning the argument. Only seven months ago, Boris won the Hartlepool by-election in Labour’s traditional heartland of the North-east.

If he regains his verve, delivers a booming economy and presides over the retreat of Covid, there can be further such triumphs.

Making mugs out of the electorate is not a clever thing for a political party to do and yet the Tories visited a double dose of humiliation upon the people of North Shropshire recently.

First they tried to misuse their Commons majority to get the constituency’s long-serving MP Owen Paterson off the hook of a damning sleaze verdict.

Then residents went through a similar experience to the rest of us when they learned that the sacrifices they made in the national interest last Christmas had not been replicated by partying Downing Street aides.

Unsurprisingly, most decided they were not prepared to put up with being treated with such palpable contempt.

So the electorate of this usually true-blue constituency took revenge on Thursday by withdrawing its support – thousands switched to the Lib Dems, a few hundred more to Reform UK. And huge numbers simply stayed at home as the Tories suffered a fearful beating in the by-election called to find a replacement for Paterson.

It was the right thing to do. Had the Conservatives won it would have sent out a signal that there are constituencies which will take any degree of mistreatment from the Tory party and still vote reflexively for the candidate with the blue rosette.

And that would have been the political equivalent of an abuser’s charter, doing nothing to punish arrogance and complacency, which have so often proved the undoing of Conservative administrations.

It is easy to say that Boris Johnson has been taught a salutary lesson about the need for discipline and restraint. But whether he will choose to learn it or simply carry on allowing himself and his allies to ignore the rules that they impose on the rest of us is an open question.

The slight silver lining in this disastrous result for Johnson is that the victors were not the Labour party but instead those perennial mid-term by-election specialists the Lib Dems.

For the second time within a few months they have taken what was a rock-solid safe seat off the Tories. Yet history shows that such seats have a strong habit of returning to the blue column at a subsequent general election.

There is no escaping that this result is a personal humiliation for the Prime Minister. Such is his dominance as the public face of the Government it can hardly be interpreted any other way.

He will have to pull out all the stops in the New Year if the pattern of his premiership is not to follow that of two recent predecessors – Gordon Brown and Theresa May.

Both were given unlikely political honeymoons but saw their popularity drop like a stone when underlying character weaknesses emerged. In Brown’s case it was bottling an early general election that set him on a downward spiral, in May’s it was being shown up as a robotic and aloof campaigner at the early election she did call.

Unlike them, Johnson has always been very good at wooing voters and may charm his way back into their good books. That is not, however, a given. This is a PM who skates on very thin ice.