As Boris Johnson is facing renewed scrutiny about what he knew about Chris Pincher when he appointed him as deputy chief whip in February, a former top civil servant at the Foreign Office Lord Salmond McDonald says in a letter that Boris Johnson was briefed in person about a formal complaint and investigation into Mr Pincherr’s behaviour. Following reports of his misconduct over drunkenly groping two men, Mr Pincher resigned on Thursday and was suspended from the Conservative Party. 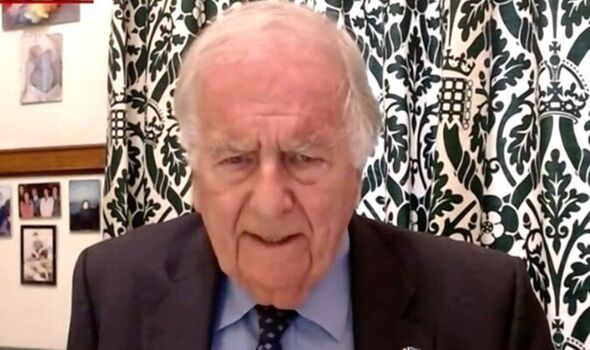 Sir Roger Gale, Conservative MP for North Thanet, said in reaction to the letter: “Mr Johnson has for three days now been sending ministers out – in one case a cabinet minister on Sunday morning – out to defend the indefensible – effectively to lie on his behalf.

“That cannot be allowed to continue.”

He retorted: “I’ve said it carefully and very deliberately.”

When asked about his reaction to the letter and the revelations in it, he said: “Sadly, I’m not remotely surprised. But I am completely horrified.

“I’m not surprised because time after time Downing Street has had to revise the story that initially has been a denial and then turned into some sort of admission.

“What we’re seeing now is a highly reputable and trusted former very senior civil servant, Lord McDonald, kicking the bottom completely out of the line that was originally peddled by Downing Street and the Prime Minister. That is absolutely unforgivable.” 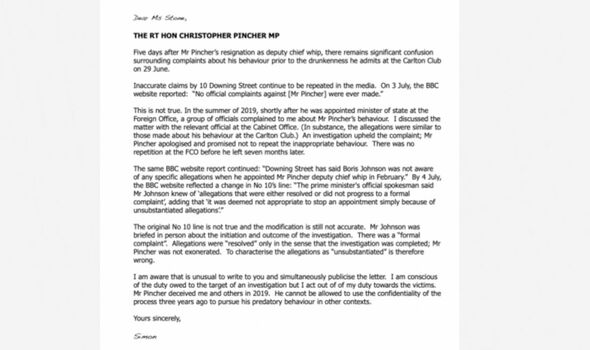 BBC News presenter then noted: “They could possibly say there was no formal disciplinary action taken against Mr Pincher and so therefore, the matter didn’t reach the threshold to take any action now.”

Sir Roger Gale interjected: “Salmon McDonald in his letter, which I have read very carefully, make it absolutely plain that he does not accept the Downing Street line.

“And he’s gone to the lentgh – the extraordinary length – of making his view known the Parliamentary Commission for Standard because he clearly feels so outraged in the manner in which the actions that he took have been misrepresented by Mr Johnson.” 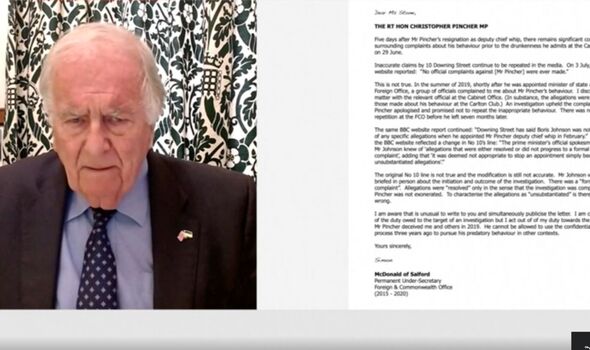 When asked about how damaging the new revelations are for Boris Johnson, Mr Gale said: “Well, you begin to wonder, don’t you if whether anything will persuade this Prime Minister that he cannot go on any longer.

“But for me, it merely underscores a concern that I have had about the Prime Minister’s lack of judgement over the whole of his time in office.

The BBC News presenter then asked about how much damage has been done to the Conservative Party’s brand and in the eye of voters.

“My personal view is that this prime Minister has trashed the reputation of a proud and honourable party for honesty and decency – and that is not acceptable. It cannot go on like this.”