How to check if you're eligible for council £60 shopping voucher

Bassetlaw council in Nottinghamshire has left residents and opposition councillors stunned after pledging to introduce at least four sun cream dispensers across in Harworth & Bircotes, Retford, Tuxford and Worksop. The bonkers policy will see factor 50 available for free to those in the town centres.

The council took inspiration from the town of Leigh after the council for the popular beach town decided to install a free sun cream dispenser on Bell Wharf Beach, meaning visitors travelling to bathe by the sea can access free protection.

The only difference? Nottinghamshire is landlocked and over a two-hour drive away from the nearest beach.

“The dispenser is available for anybody to use who has forgotten sun cream when using the town centre but can also be used by low-income households who may not be able to afford sun cream which can cost several pounds per bottle. 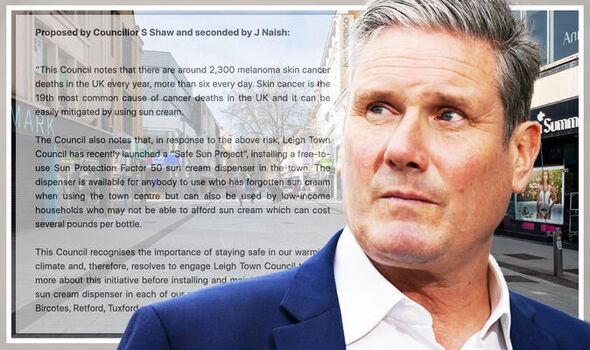 “This Council recognises the importance of staying safe in our warming climate and, therefore, resolves to engage Leigh Town Council to learn more about this initiative before installing and maintaining at least one sun cream dispenser in each of our main urban locations – Harworth & Bircotes, Retford, Tuxford and Worksop.”

It said the action was being taken to help tackle skin cancer.

The motion highlighted that there are around 2,300 melanoma skin cancer deaths every year in the UK.

Reacting to the decision to install the dispensers, local Conservative MP Brendan Clarke-Smith told Express.co.uk: “I’m not sure how many people intend on sunbathing whilst they are out shopping in North Nottinghamshire and the last I checked we don’t have any beaches either.

“Never mind having public suncream dispensers – local people will assume the Labour council is the one taking the Piz.”

Conservative councillor Mike Introna added: “At most full council meetings the Labour Group spend a great deal of time discussing motions on national issues that they cannot impact or refusing to answer questions on subjects they can. 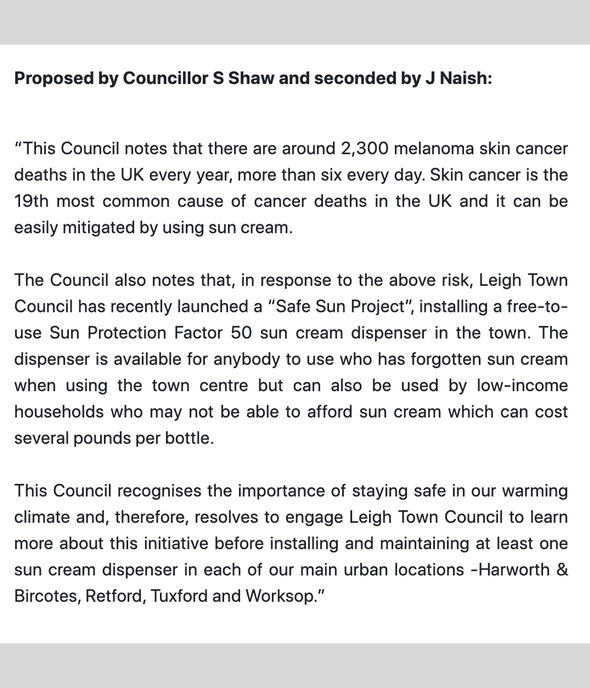 “The first time they talk about local issues in quite some time it is to focus on putting at least four sun cream dispensers in the whole of Bassetlaw.”

This isn’t the first time Bassetlaw District Council has found itself the centre of attention for bizarre decisions.

Earlier this year the authority made headlines when it changed bin collection rules, warning the black wheelie bins would not be emptied if lids were not properly closed. 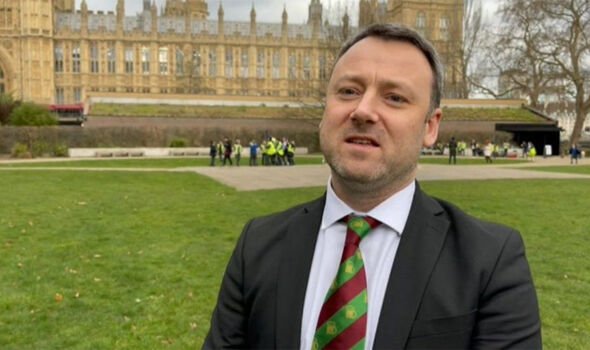 It claimed binmen could be “injured or hurt” when collecting rubbish as raised lids “can blow up into the faces of staff in blustery conditions”.

Local resident and Conservative activist Ben Storey told this website the latest motion passed by the council: “It’s not the sun that’s burning us here in Bassetlaw, it’s the Labour-run council.

“This is just rubbing it in and I don’t mean the sun cream.”

It claimed binmen could be “injured or hurt” when collecting rubbish as raised lids “can blow up into the faces of staff in blustery conditions”.

“It’s not the sun that’s burning the us here in Bassetlaw, it’s the Labour-run council.

“This is just rubbing it in and I don’t mean the sun cream.”