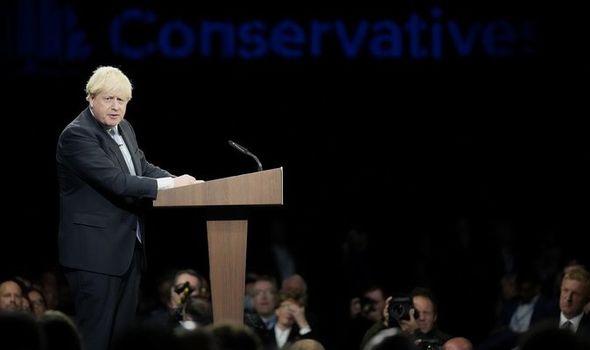 Minutes before the vote, Mr Johnson said surging Covid cases gave him “absolutely no choice” but to introduce the restrictions. Earlier, Chief Medical Officer Chris Whitty warned the Cabinet of a “significant increase in hospitalisations”. The rebellion of 97 Tories, including ex-Cabinet ministers, opposed his plan to make Covid passes mandatory at nightclubs and large events. The biggest revolt of Boris Johnson’s premiership left him relying on Labour votes to pass the plan.

But he vowed: “We’re going to do the right thing by our people”. Sir Geoffrey Clifton-Brown, treasurer of the backbench 1922 Committee, suggested Mr Johnson may face a leadership challenge in the New Year. He was “very surprised” by the size of the rebellion, adding it “shows quite a major division within the party”.

Mr Johnson had said it needed only a small proportion of people with the Omicron variant ending up in hospital for there to be a “real problem”. He spoke after Prof Whitty predicted a big rise in admissions. He said it was too early to know how severe Omicron is, neither could he say if cases are flat in South Africa, where it was first recorded.

Despite the PM’s warnings, 61 Tories also opposed compulsory vaccination for care staff while 38 voted against extending the mandatory masks rule to most indoor public settings. Ex-chief whip Mark Harper, one of the rebellion’s ringleaders, said: “A significant number of Conservative colleagues like this voting against the Government sends a clear message and I hope that message is listened to and acted on.

“This clearly isn’t a good night for ministers or for the Government. You either listen and you respond and you do things differently, or you ignore what you have been told and you plough on regardless and then this will happen over and over again. That choice is for the Prime Minister. I hope he makes the right choice, changes how the Government operates. We can do things better and I very much hope that we do.”

Sir Charles Walker, vice-chairman of the 1922 Committee, said for mutineers “this was just a bridge too far. I think they were putting a marker down. It was a cry of pain from the Conservative Party.” He said the PM was “in a very, very, very difficult position and added: “There has been a strong view within the Conservative Party that vaccine passports do not work and [are] not something many colleagues wanted to see introduced. This is a very, very specific line being drawn in the sand now and I think the Prime Minister and his team need to listen.”

His colleague Sir Geoffrey said: “The Prime Minister has really got to think very carefully about how he’s going to reset his performance, to actually govern with a united party because we know what happens to disunited parties. He’s got to consult his party properly before bringing these sorts of measures to the Commons.”

Asked about the prospect of a leadership challenge, Sir Geoffrey said: “I think that’s got to be on the cards.” Mr Johnson had tried to persuade rebels with a heartfelt speech but dozens ignored his plea and voted against key measures in his Plan B contingency package.

The Commons voted 369 to 126, majority 243, for mandatory Covid passes for entry to nightclubs and large venues in England. MPs backed making NHS and social care staff be vaccinated by April by 385 to 100, majority 285. And they voted 441 to 41, majority 400, to extend the need for masks in more indoor spaces in England including museums and galleries.

Some Tories had expected more than 80 colleagues to rebel and several frontbenchers were tipped to quit. But party whips were taken by surprise by the scale of revolt. Mr Johnson had made clear his own reluctance to tighten restrictions, while pointing out the surge of Omicron cases, telling backbenchers: “We’re going to do the right thing by our people.”

He claimed the UK would still have far fewer Covid curbs than most other countries despite the introduction of Plan B and said it was the best way of keeping businesses open and avoiding lockdown restrictions.

One MP said: “It was a very convincing performance. The PM delivered a very serious and sober speech and struck the right tone.” Opening the Commons debate, Health Secretary Sajid Javid warned Omicron was now a “grave threat.

“Although we don’t yet have a complete picture of Omicron’s severity, even if severity was significantly lower then the much higher transmissibility of Omicron means it still has the potential to overwhelm the NHS. With infections rising so quickly, we’re likely to see a substantial rise in hospitalisations before any measures start to have an impact. So there really is no time to lose.”

After Prof Whitty briefed ministers, the Prime Minister’s spokesman said: “Cabinet was told that the new variant continues to spread at a concerning rate, with almost 4,500 cases confirmed across the UK, 10 hospitalisations and sadly one death of an individual with Omicron. He said it was too early to say if cases were reducing or plateauing in South Africa.

Mr Johnson today praised the “inspiring” way that booster jabs are being taken up. In an exclusive article for the Daily Express, the Prime Minister wrote: “I’m immensely proud of the way the country has stepped up and the progress that we’re making. But if we are going to reinforce our ramparts before the full force of Omicron hits, then we need to do even more and we need to do it even more quickly.”

He also appealed for more volunteers to help ramp up the booster campaign, which is aiming to ensure every eligible adult gets the extra protective jab by the end of the month. “The more people volunteer, the more people can get boosted and the more lives we can save,” Mr Johnson added.