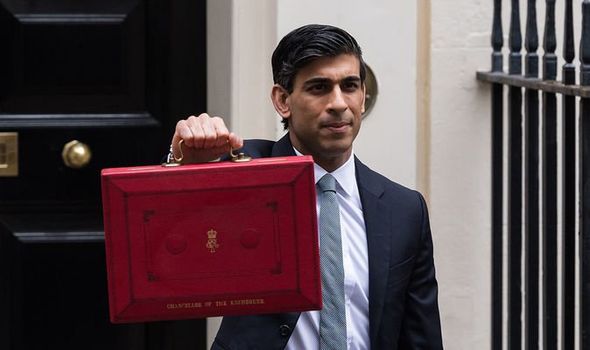 The Chancellor’s Budget will set out a string of measures to boost growth after the pandemic shockwaves. He will also map out how businesses can make the most of the UK’s new found Brexit freedom from Brussels to liberate companies from red tape.

Extra investment in the country’s Green Industrial Revolution will also be announced in the keynote financial address.

“Of strong public services, vibrant communities and safer streets. An economy fit for a new age of optimism.

“That is the stronger economy of the future.”

Better than expected economic growth forecasts to be published today by the Office for Budget Responsibility are understood to have given the Chancellor extra room to carry on spending.

These will include an extra £6billion towards tackling the NHS treatment backlog left after Covid, a £7billion investment in local bus and rail services and a new Global Britain Investment Fund.

There is also an increase in the National Living Wage. And around £500million is expected to be invested in providing extra support for families with newborn babies.

A network of family hubs is to be established following a review into reducing inequalities for youngsters.

Tory MPs also expect the Chancellor to continue his Budget freeze in fuel duty for motorists amid a surge in petrol prices.

Measures designed to build a “high-wage” economy will be at the centre of the Budget and Spending Review.

This will include ending the one-year pause on public sector pay increases and raising the National Living Wage to £9.50.

But ministers yesterday refused to guarantee that public sector workers will get a real-terms rise in wages given the recent surge in inflation.

He said: “The Chancellor is keen to give people a rise.

“They will then take that into account as they look to what should be an appropriate rise for the public sector, given the public finances.

“I can’t pre-empt what they are going to do. We will see where we are come next April when the review bodies have reported.”

Mr Scully acknowledged that the economy was going through a “difficult time” because of rising cost-of-living pressures.

Unions urged Mr Sunak to commit to an above-inflation rise and to guarantee new money for departments so that pay increases do not have to come from cuts elsewhere.

TUC general secretary Frances O’Grady said: “We need a proper plan from the Chancellor ­tomorrow to get pay rising across the economy.

“That means a pay rise for all public sector workers that at least matches the cost of living. If Rishi Sunak does not increase department budgets, the pay freeze will be over in name only.”

Unison general secretary Christina McAnea said: “If the Chancellor doesn’t allocate extra money to government departments to fund the much-needed wage rises, the pay freeze will continue in all but name.

“Anything less than the rate of inflation is, effectively, a pay cut.”

Economist Ben Zaranko, from the Institute for Fiscal Studies think tank, said: “A pay rise from April 2022 won’t provide any immediate help or solace to public sector workers struggling with rising costs of living over the coming winter months.

“It would also take a sustained period of pay growth for public sector workers to undo the real terms pay cuts that many experienced over the course of the 2010s.”

Meanwhile, Mr Sunak yesterday announced that his Budget will also devote £30million for UK bids to host the 2025 women’s rugby World Cup and the start of the 2026 Tour de France to boost British support.

He will promise a further £11million to support the joint UK-Ireland bid to host the 2030 men’s football World Cup.

The Chancellor said yesterday: “I’m excited at the prospect of bringing more world-class sporting events to the UK. That’s why I’m backing these British bids, with over £40million of funding to make our case.

“Our bids will include events taking place across the country, and I’m hopeful that everyone will get a chance to cheer on their sporting heroes.”

Labour last night called for the Budget to tackle the rising cost of living.

Shadow chancellor Rachel Reeves said: “This Budget must create a more resilient economy and take the pressure off working people.

“Labour would grow our economy, with our plan to buy, make and sell more in Britain, and a Climate Investment Pledge to ­create the jobs of the future.

“With costs growing and inflation rising, Labour would ease the burden on households, cutting VAT on domestic energy bills immediately for six months.

“And we would not raise taxes on working people and British businesses, while online giants get away without paying their fair share.”