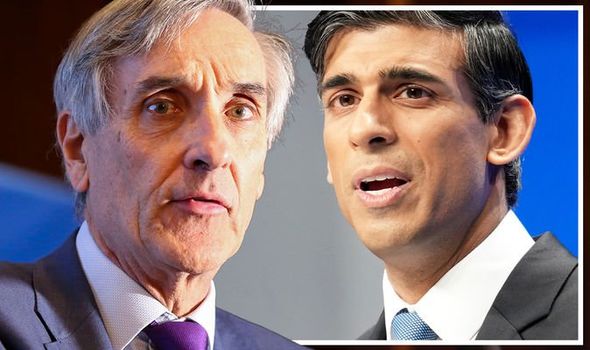 Official figures yesterday revealed that 1.2million workers are set to be pushed into the 40 percent higher band by 2026 following the Chancellor’s decision to freeze the income tax thresholds. Average households will have to pay around £430 a year income tax by 2026 due to the measure, the data from the House of Commons Library showed.

The financial hit comes on top of the current surge in the cost of living and growing Tory backbench discontent about tax rises to pay for the cost of the Treasury response to the covid pandemic and to raise funds for the NHS and social care system.

Former Cabinet minister John Redwood yesterday warned freezing income tax thresholds will be “another hit to living standards for aspiring people who are trying to make their lives better.”

He said: “I would like us to get back to raising income tax allowances. My overall view is that there is going to be too big a hit to take-home pay in April and they [ministers] have got to do more to ease the squeeze.”

Mr Redwood added that scrapping the planned National Insurance hike due in April should be a priority for the Chancellor because that move “clearly” broke the Tory manifesto pledge not to raise income tax.

Jake Berry, chairman of the Northern Research Group of Tory MPs, uged the Chancellor to “think again” about the threshold freeze.

The analysis by the House of Commons Library showed inflation and rising earnings will mean an extra 1.2million are pushed into the higher rate tax band which currently kicks in when a salary reaches £50,070.

If the Chancellor scrapped his freeze and raised the threshold in line with inflation, it would reach £56,270 by 2026.

The research also showed almost 1.5 million low earners will be brought into paying the basic level of income tax will be pushed into the 20 percent basic tax rate that starts at £12,750.

According to the research, household disposable incomes are expected to be one percent lower by 2026 across all regions than they would be if there was no freeze to income tax thresholds.

London and the South East are expected to be the hardest hit, with losses of around £500 per household. In London alone there will be 210,000 additional higher rate taxpayers and 155,000 more people paying income tax.

The total cost to households across the UK, excluding Scotland, of the freezes will be £10.9billion in 2025/26, it says.

The Lib Dems, who commissioned the research, called on the Government to drop the “stealth-tax raid” that will “clobber families who are already feeling the pinch.”

“Boris Johnson must drop this unfair stealth tax that will clobber families who are already feeling the pinch”, she said.

“People are worried about the rising cost of living and paying their bills this winter. Now they face years of tax rises under a Conservative government that is taking them for granted.”

The issue of high taxation amid rising living costs has caused a major rift among senior Tories.

At a Cabinet meeting earlier this week, Commons Leader Jacob Rees Mogg told the Chancellor the National Insurance hike planned for April should be scrapped to stem the cost-of-living crisis as inflation and energy bills rise.

And last month Brexit Minister Lord Frost resigned from the Cabinet citing high taxation as one of his major concerns.

A Government spokesman said the UK had the “highest basic personal tax allowance” in the G20 group of industrialised nations.

“Maintaining the threshold is a progressive approach to fund our world-leading public services and rebuild the public finances following covid.

“Higher earners will continue to contribute more and nobody’s take-home pay will be less than it is now in cash terms.”

The tax row follows intensifying concern about the political impact on the Government of the rising cost of living with inflation now at around six percent.

Paul Johnson, director of the Institute for Fiscal Studies, said the costs-of-living facing households this year “could well be worse than the financial crisis.”

Torsten Bell, of the Resolution Foundation think tank, said: “April in particular is going to be a cost of living catastrophe, and the year as a whole will be defined by the squeeze.”