The action by the Senate Judiciary Committee would set up a vote on Monday by the full chamber to confirm Judge Amy Coney Barrett to the Supreme Court. 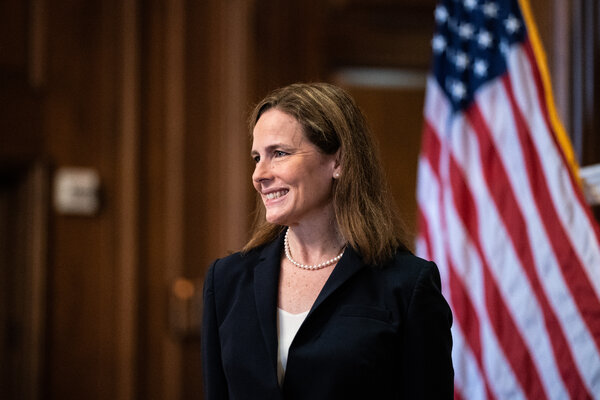 WASHINGTON — Republicans on the Senate Judiciary Committee were prepared on Thursday to advance the nomination of Judge Amy Coney Barrett to the Supreme Court, planning to skirt the panel’s rules and vote to recommend her confirmation as Democrats boycott the session.

Though the panel was not scheduled to convene until 9 a.m., all 12 Republicans had already signaled that Judge Barrett had their enthusiastic backing. Their action would set up a vote by the full Senate on Monday to confirm Judge Barrett, delivering President Trump and Republicans a coveted achievement just eight days before the election.

Democrats, livid over the extraordinarily speedy process, planned to spurn the committee vote altogether. By doing so, they effectively dared Republicans to break their own rules to muscle the nomination through. Without the votes to block the judge in either the committee or the full Senate, though, their action was purely symbolic.

Democrats have sharply opposed Judge Barrett, a conservative in the mold of former Justice Antonin Scalia, on policy grounds. But their goal on Thursday was to tarnish the legitimacy of her confirmation, arguing that Republicans had no right to fill the seat vacated just over a month ago by the death of Justice Ruth Bader Ginsburg, when millions of Americans were already voting.

Democrats were particularly angry that Republicans had reversed themselves since 2016, when they refused to consider President Barack Obama’s Supreme Court nominee nine months before the election that year.