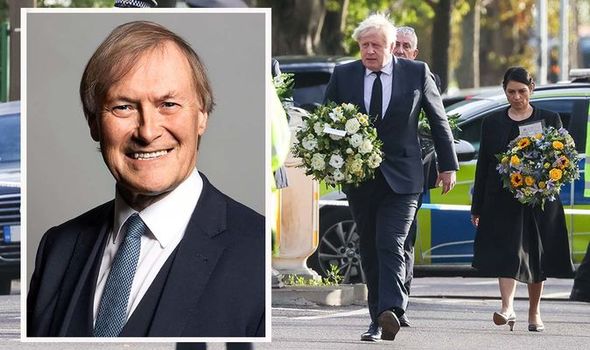 Sir David, 69, was killed at a church surgery on Friday. It was rep­­orted that the suspect’s name is Ali Harbi Ali, 25. He is said to have been involved in a deradicalisation programme called Prevent ‑ and although security services are adamant he was not known to them, the atrocity is being treated as terrorism.

Police are probing if Sir David was targeted because of his Catholicism.

The show of party unity came as constituents recalled the work the “absolutely wonderful” MP did in his community during his almost 40-year career and vigils were held in his memory.

Moira and Pat, cousins of Sir David, wrote: “Thinking of your lovely family. Can’t believe this has actually happened. Will always love you.”

Samantha Macdonald, 44, tearfully recalled meeting Sir David when he came to her school when she was 12.

She said: “He was always so involved with the community, so accessible as well. He knew every head teacher’s name of every school in his constituency. My daughter loved him.”

Last night about 300 people gathered near the crime scene for a candle-lit vigil.

After a one-minute silence, residents and councillors spoke of their experiences with the MP.

Southend council’s Labour leader Ian Gilbert said: “He was passionate about serving his constituency. He would make time for anyone, no matter what their background or their political support.”

Sources close to Sir Keir have confirmed that Labour will not field a candidate in the Southend West by-election, as major parties did not when Labour’s Jo Cox was killed by an extremist in Batley and Spen five years ago.

The Lib Dems also said they will not be standing.

The Sunday Express understands that the suspect, who was held at the scene of the stabbing, is a British national of Somali heritage who was born in this country and is understood to have links to the Southend area.

It has been reported that the suspect, who has been linked to Islamist extremism, was on a Prevent list for religious hatred.

Two houses were raided yesterday as the Metropolitan Police carried out a terror investigation, and ministers were understood to have received a briefing last night on what has emerged so far and wider implications for security.

The second murder of an MP in five years has also reopened the debate on whether MPs need greater security when holding their constituency surgeries and meeting the public.

Ms Patel said Sir David “was killed doing a job that he loved, serving his own constituents as an elected democratic member”.

She went on: “We will carry on, we live in an open society, a democracy. We cannot be cowed by any individual or any motivation…to stop us from functioning, to serve our elected democracy.”

He said: “The personal contact that brings those with elected power into contact with those they serve is as fragile as it is precious.”

Former shadow home secretary Diane Abbott also warned against bringing the police into MPs’ surgeries. She said: “One colleague in north London was telling me that because of death threats she had a police officer and car outside her advice session.

“Well, the number of people coming to see her dropped right down. You don’t want to have a set-up which is so off-putting.”

Ms Abbott said she would prefer to meet constituents behind a screen, a measure that has been in place during the pandemic.

With the Government about to bring forward the Online Hate Bill she also called for greater action on the part of social media companies, adding: “They have to be more responsible and start taking down and closing down some of these accounts which are spreading ­violent hatred.”

Friends of Sir David on the Conservative benches have also confirmed that they intend to try to toughen up the Bill to end the “toxic political discourse” on social media and threats to politicians and other public figures.

Romford MP Andrew Rosindell, a close friend of Sir David, said: “Any society in which this could happen has a serious and grave problem with its political discourse.

“For any MP, let alone one so committed to his constituents, to be in danger while serving the community they are elected to represent, is intolerable.”

Former policing and defence minister Sir Mike Penning rejected the idea of dropping face-to-face surgeries. He said: “I’m not having an officer at the entrance to my meetings. That’s fundamentally wrong.”

Former minister Chris Skidmore has continued to hold face-to-face surgeries despite someone previously being put behind bars for threatening to kill him.

He said: “I’ve had someone who has been in prison for threatening to kill me, so I recognise these threats, but it is a cornerstone of our way of life when it comes to our democracy ‑ very few countries have this.”

However, Bournemouth East Conservative MP Tobias Ellwood, a former officer with the Royal Green Jackets who battled to save the life of PC Keith Palmer during the 2017 Westminster terror attack, said face-to-face meetings should be paused until a security review is completed.

Former Labour deputy leader Harriet Harman has said she will be asking Boris Johnson to back a Speaker’s Conference to review the safety of parliamentarians.

Ipswich Conservative MP Tom Hunt added: “I don’t think he would want the future to involve MPs being cocooned away from their constituents.”

Labour MP Karl Turner said there is only so far politicians could go to protect themselves without alienating constituents.

He added: “You can do as much as you can but if a knife-wielding maniac bursts in, what can you do about that, really?

“I think you’ve got to take the risk. It is a pretty bad deal if you can’t see your MP.”

A National Police Chiefs’ Council spokesman said every MP will be contacted in light of the fatal stabbing.

But Dr Rakib Ehsan, of the Henry Jackson Society’s Centre on Radicalisation & Terrorism, said that Britain must reluctantly accept a “new reality”.

Last night the daughter of Dame Vera Lynn has said she will include a tribute to Sir David in a memorial to her mother that the Tory MP campaigned for.

Virginia Lewis-Jones, a family friend of Sir David, said she will add a tribute to the statue.