On certain rare matters, Democrats are finding buy-in with Republicans. On many others, the battle lines are firmly drawn. 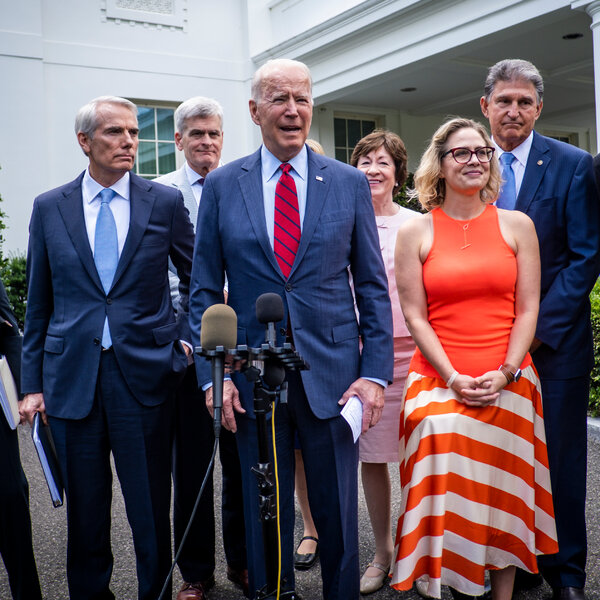 Is President Biden about to achieve his holy grail?

A bipartisan deal on infrastructure appears to finally be in the offing, after a group of senators from both parties joined the president in the Rose Garden today to announce that they’d reached a compromise.

It’s far smaller than Mr. Biden’s original proposal, and some details remain to be worked out, but the president said that reaching any compromise at all was a major achievement.

“We have a deal,” Mr. Biden said, harking back to his days as a wheeler-dealer in the Senate. “I think it’s really important we’ve all agreed that none of us got all that we wanted.”

This follows on the heels of the Endless Frontier Act, a bill that aims to increase American competitiveness against China, which passed the Senate this month with broad bipartisan support. And in the House, lawmakers from both parties took steps this week to move forward with major antitrust legislation, signaling a potential breakthrough.

Six months into Mr. Biden’s presidency, is he about to deliver on the biggest — and arguably the most quixotic — promise of his presidential campaign: restoring bipartisan unity?

Not so fast. Just as Mr. Biden and the senators were taking their victory lap at the White House, Speaker Nancy Pelosi announced this morning that Democrats were forming a select committee to investigate the events of Jan. 6, a stark reminder that Republicans continue to block a bipartisan investigation into the violent uprising at the U.S. Capitol.

Ms. Pelosi said she was taking the step “with great solemnity and sadness,” arguing that she had been left with no choice.