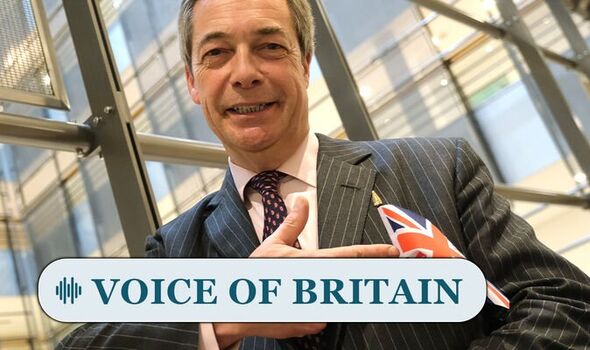 We want to hear what you want to know from the man who helped deliver the UK’s withdrawal from the EU. The former leader of Ukip and GB News pundit will then be asked what he thinks on a range of Brexit-related issues.

Mr Farage has already been very vocal in recent weeks about where he thinks Boris Johnson is letting the country down with our newfound freedoms.

What would you like to ask Nigel Farage? Have your say in the comments section below.

In a column earlier this week, he said that under Prime Minister the UK had “drifted back to the era of David Cameron’s coalition Government, when social democracy ruled the day”.

He added: “Nobody who voted Conservative in 2019 voted for a failure to curb illegal immigration, higher taxes and continuing EU red tape. But this is what they got.”

Nigel Farage also took aim at the Chancellor, Rishi Sunak, writing: “Brexit may look like it has been completed, but it has not been. As a pro-Brexit Chancellor, Sunak should feel wretched about that.”

He claimed that Mr Sunak “has point-blank refused to honour the Brexit promise to cut the 5 percent VAT rate on fuel. More seriously, he has not lifted a finger to remove or simplify thousands of burdensome EU rules.”