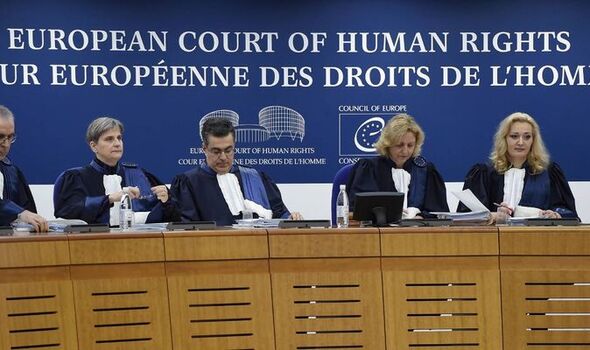 Former Brexit Party MEP David Bull has said the degree of power the Strasbourg body, with its annual budget of £65million, retains over UK rules makes a “mockery” of Brexit.

The EHCR is made of judges selected from the 46 members of the Council of Europe, which is separate from the European Union, and which the UK is still a member of. In addition, Russia retains a representative, Mikhail Lobov, despite being excluded from the Council after Putin ordered his invasion on February 24.

Mr Lobov, 51, from the Russian city of Chelyabinsk, served as an intern at the Embassy of the Russian Federation in Cameroon between 1991 and 1992, before studying for a degree in law at Moscow State Institute of International Relations.

A former Assistant Professor of Constitutional Law in the Faculty of Law at the University of Strasbourg, he was appointed to the ECHR on January 2, barely a month before Putin sent troops into Ukraine, replacing Dmitry Dedov.

Mr Bull, who served alongside party leader Nigel Farage as one of 29 Brexit Party MEPs in 2019, and who is currently a presenter on TalkTV, said the ECHR’s intervention in the planned deportations to Rwanda highlighted a glaring anomaly at the heart of the nation’s legal system.

He explained: “I think this is something the average person in the street just cannot get their head round. How have we got absolutely no say in our own judicial system, despite Brexit and all the promises that we have had?

“The fact is, it’s gone through three courts, the High Court, the Court of Appeal, and the Supreme Court of the United Kingdom, and then at the 11th hour is trumped by some body in Europe.

“I’m as frustrated as anyone by that, and actually for me, it shows what appalling management of Brexit the government has achieved.

“The thing is, we’re not a tin-pot dictatorship. The UK has a great judicial system and currently, they’re trying to bring in a British Bill of Rights, although if that ever happens, I’ll probably be very old.

“The bottom line, the reason we fought so hard for Brexit, was to have freedom to choose, to take back control of our money, laws and borders and now the whole thing is a mockery as far as I’m concerned.”