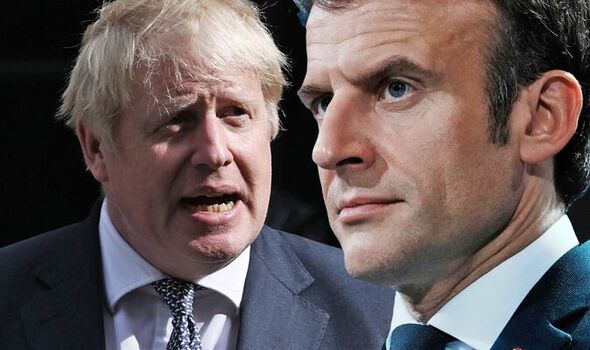 This comes after Mr Macron outlined his vision for a new EU-dominated organisation, which has been dubbed “EU-lite”. The organisation would include both members and non-members of the EU. But Tory MPs hit out at the proposal, with former Brexit minister David Jones warning that the idea would be “received very badly in the UK”.

He added: “People didn’t vote to leave only to be stuck in the orbit of a sclerotic European Union.

“We are a nation with a global outlook, not a satellite of Brussels.”

Meanwhile, fellow Tory Brexiteer Andrew Bridgen said: “We are already members of another organisation that has guaranteed the security of European democracy for the last 70 years.

“It’s called NATO and we are a major participant in it. France at times, not so much.”

Mark Francois, chair of the European Research Group of Conservative eurosceptic MPs, told MailOnline: “The British people have not spent years wrenching themselves free of the overbearing EU, only to rejoin it, at the behest of President Macron.

“His recent pandering to Vladimir Putin may also explain why the countries of Eastern Europe don’t favour his plans for an aggrandised EU either.”

Veteran Conservative backbencher Peter Bone used a “vomit emoji” to describe the plans, adding: “Probably sums up my view on this idea.”

Mr Macron explained that the new community would sit parallel to the EU, helping the bloc to strengthen ties with partner countries, such as Ukraine.

The French President implied that Ukraine could become part of an outer ring of EU cooperation before it is granted full EU membership.

Mr Macron said nations like the UK, who have already left the EU, would be offered a “full place” in his proposed community.

Speaking to the European Parliament in Strasbourg yesterday, the French leader said he wanted to create “would call a European political community”.

He added: “This new European organisation would allow democratic European nations adhering to our core values to find a new space for political cooperation, and security.

“Joining it would not prejudge future membership of the European Union, and it would not be closed to those who have left the latter.”

While he said that Ukraine is a “heartfelt member of our Europe”, he admitted that it could take “several decades” for the country to be granted member status.

He said: “Ukraine by its fight and its courage is already a heartfelt member of our Europe, of our family, of our union.

“Even if we grant it candidate status tomorrow, we all know perfectly well that the process to allow it to join would take several years indeed, probably several decades.”