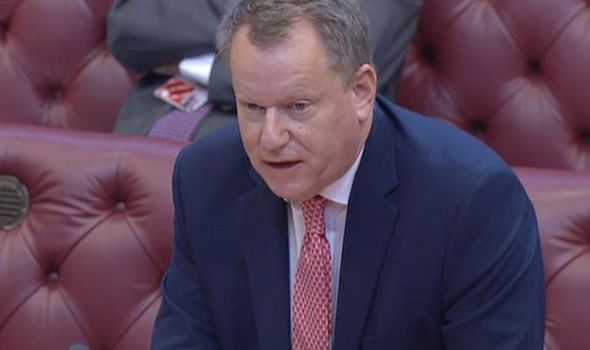 Speaking in the Lords, the Brexit minister set out proposals ministers are putting forward to the EU.

He set out a number of plans the UK want to see adopted to limit bureaucratic paperwork required on some shipments across the Irish Sea.

Ministers have argued the Protocol in its current form is unsustainable.

“Discussions have not got to the heart of the problem. Putting simply, we cannot go on,” Lord Frost told peers in Parliament.

He said the problems caused by the Protocol were serious enough that the UK could trigger the legal mechanisms necessary to suspend its implementation.

However, the minister said Britain would not currently use the Article 16 legal safeguard but instead seek to “urgently” hold talks with Brussels on the UK’s compromise proposals.

Under the terms of the Brexit withdrawal agreement signed in 2019, customs checks are placed on some goods crossing from Britain to Northern Ireland.

Brussels says the red tape is necessary to protect the EU single market.

However, the UK says the mechanism places unacceptable disruption on the UK’s internal market.

Retailers including Marks & Spencer have warned that the current arrangements mean some products will not be able to be sold in Northern Ireland.

Yesterday a representative of Irish Taoiseach Micheál Martin promised the UK’s proposals “would be carefully considered” by the EU.

Brussels has repeatedly rejected the UK’s attempts to ease frictions caused by the Protocol and said the mechanism must be implemented in full.

Britain infuriated the EU earlier this year when it unilaterally extended the grace periods on some checks.