The new Prime Minister’s likely top team is also being described as the most right-wing government in a century. Ms Truss is expected to make long-term ally, neighbour and Business Secretary Kwasi Kwarteng her Chancellor.

If that happens, he would be the fourth non-white occupant of that office in a row, following Sajid Javid, Rishi Sunak and Nadhim Zahawi.

Attorney General Suella Braverman is poised to move to the Home Office and James Cleverly to the Foreign Office – the two other traditional great offices of state.

Defence Secretary Ben Wallace is expected to keep his job after winning praise for his handling of Britain’s response to Russia’s invasion of Ukraine.

Work and Pensions Secretary Therese Coffey, one of Ms Truss’s closest political allies, is tipped to take over as Health Secretary and the headache of attempting to deal with an NHS in permanent crisis. 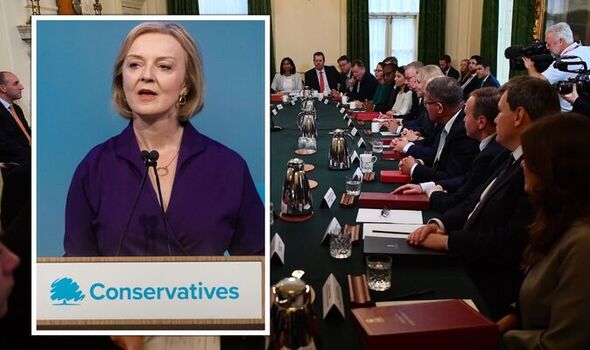 Ms Truss is also expected to wield the axe, with a mass clearout of Rishi Sunak supporters after bitter blue-on-blue attacks during the leadership contest.

Into the political wilderness too will go Michael Gove, after serving under the three previous PMs.

Deputy PM and Justice Secretary Dominic Raab and Boris Johnson himself are expected to return to the backbenches.

There is also expected to be a clearout of Number 10 advisers, with only a handful to be kept on as Ms Truss seeks to slim down the operation.

Chancellor Nadhim Zahawi is expected to be demoted to Chancellor of the Duchy of Lancaster, while Chief Secretary to the Treasury Simon Clarke could bag the job of Housing Secretary.

Brexit supremo Jacob Rees-Mogg is widely thought to be the next Business Secretary, with Anne-Marie Trevelyan likely to continue in her International Trade briefing.

Minister for Disabled People Chloe Smith has been earmarked for promotion to Work and Pensions Secretary. Kemi Badenoch, one of the breakout names of the leadership election, is the frontrunner for Education Secretary, although she could be put in charge of Culture, Media and Sport instead.

Grant Shapps is now expected to stay as Transport Secretary while Trade Minister Ranil Jayawardena is tipped to be rewarded with the Department for the Environment, Food and Rural Affairs. The post of Northern Ireland Secretary has proved to be a headache, with leadership rival Penny Mordaunt said to have turned it down.

Another ex-leadership contender, Tom Tugendhat, is lined up for the role of Security Minister with a seat at the Cabinet table.

Alister Jack is expected to stay as Scottish Secretary, while Robert Buckland may end up keeping his post as Welsh Secretary.

Lancashire MP Jake Berry, chairman of the Northern Research Group of MPs, is in the running for a big job, possibly as party chairman. Former leader Iain Duncan-Smith has been touted as the next Leader of the House of Commons.

Brandon Lewis could be moved into the role of Justice Secretary having spent two years as Northern Ireland Secretary.

Ms Truss’s clearout is expected to spell the end for Health Secretary Steve Barclay after barely two months in the post.

Former Brexit negotiator and Tory grassroots darling Lord Frost will not be joining the top team.

An early backer of Ms Truss, he had been tipped for a big job in her administration and was in talks about becoming Chancellor of the Duchy of Lancaster, a mid-ranking Cabinet role.

The Cabinet is due to meet for the first time in Downing Street tomorrow.