The hot favourite to be named the new Tory leader and Prime Minister on Monday made her attack on what many see as the last proper day of campaigning in the contest ahead of the London hustings in Wembley this evening. Ms Truss warned that Britain only does well when its capital does well and said that Khan has held the city back in his tenure as mayor.

In a full blooded attack, she pointed out that Khan had promised to end strikes in London when he first became mayor in 2016 but in six years the city’s transport system has been crippled with 95 days of strikes.

She also pointed out that under his watch knife crime has exploded in London with a record 30 deaths last year, a record since the Second World War, mostly of teenagers and another nine this year.

She also noted that during his time running London violent crime against women and girls has also been on the rise. 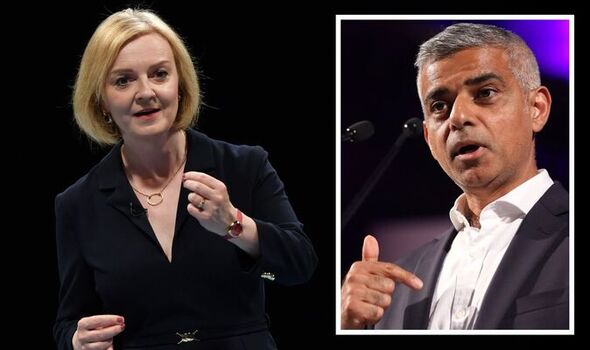 Ms Truss said: “When London does well, the UK does too. But for many years, the capital has been let down by Sadiq Khan and the Labour Party’s lack of ambition and inability to deliver on their commitments.

“I will solve what he has been unable to by making sure that the capital’s vital services keep running and people feel safe walking down the street. And I will unashamedly champion London’s success, so that it can continue to compete on a global stage by cutting taxes, slashing regulation and unleashing investment. And I will put an end to top down housing targets and give greater local community control.

“We were elected in 2019 to make sure every corner of the UK succeeds and has access to the best opportunities. Delivering for every part of London and allowing this great global city to thrive is vital to achieving this, and as Prime Minister I will endeavour to do so.”

The Foreign Secretary who is taking on Rishi Sunak in the final two with the result due on Monday has vowed to “unshackle” London’s economic potential if she becomes Prime Minister.

She claimed she will put an end to union barons’ stronghold on the capital’s vital services and economy by introducing legislation to guarantee minimum service levels and stopping members receiving tax-free payments on the days they are striking.

She has also committed to deliver the 2019 manifesto commitment of having 20,000 more police officers on the beat and ensure forces are focused on policing the front line, not overly burdened by form filling.

She has vowed to scrap burdensome regulations that stifle job creation, growth and investment through the establishment of new, low regulation ‘Investment Zones’ in and around London.