Lithuania declared the time for rhetoric “over” and called for Brussels to take concrete actions in retaliation for the incident. Its president Gitanas Nausėda said the diversion of the flight was “state terrorism” against the European community. He added: “I think the time for rhetoric and vocal expansions has passed – it’s over.

“We need clear actions in order to change the pattern of behaviour of this very dangerous regime.”

It comes after the Ryanair flight, carrying more than 170 passengers from Greece to Lithuania, was ordered to land in Belarus after reports of a bomb on board.

The airliner was intercepted by a Mig-29 fighter jet shortly before it was set to leave Belarusian airspace and told to touch down in Minsk.

When it did, opposition activist Roman Protasevich, 26, was detained by state security services. 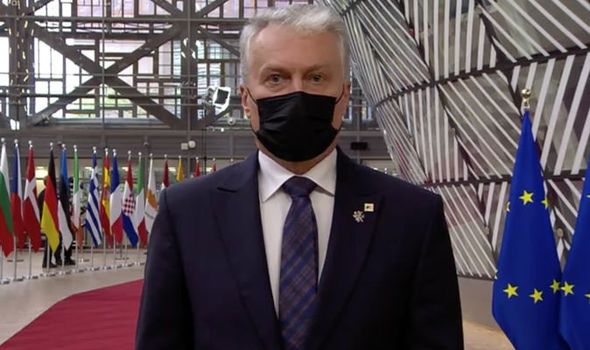 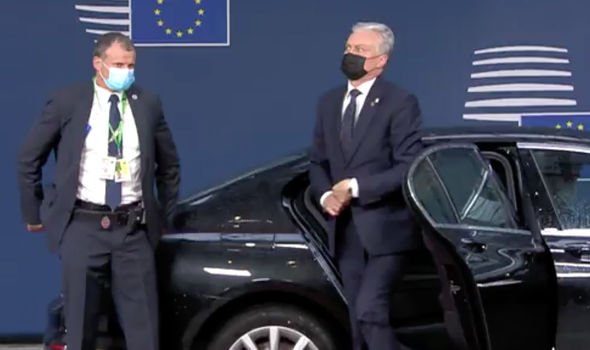 In Brussels, EU leaders are set to discuss plans for the bloc’s response to the incident, including banning flights over Belarus and preventing its national carrier, Belavia, from landing at European airports.

Foreign Secretary Dominic Raab earlier today announced that all British airlines should stop flying through Belarusian airspace and halted all direct flights to the country.

Pressure is growing on eurocrats to impose similarly tough sanctions with the EU’s foreign affairs strategy showing signs of sluggishness.

Arriving at the Brussels leadership summit, Irish PM Micheal Martin said: “Obviously this evening the immediate issue before us is the appalling reckless and unacceptable activity by the Belarusian government yesterday, in forcing down a Ryanair plane and the arrest of Raman Protosevich. 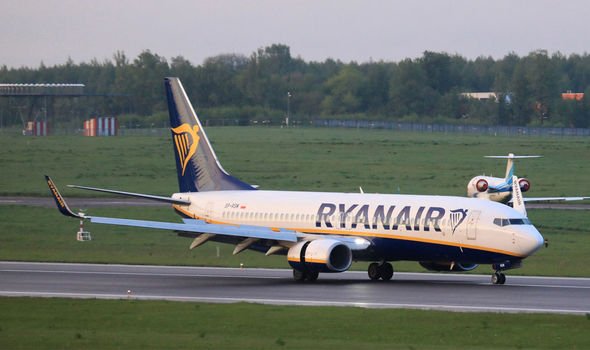 “We call for his immediate release. We believe this action is contrary to all principles of democracy, freedom of association, free speech, and also endangered, European citizens and the crew on that aeroplane and its behaviour that’s not acceptable.”

“Many leaders this evening will be discussing this and we from an Irish perspective will be calling for very firm and strong response to this action,” he added.

Earlier today European Council President Charles Michel said he hoped the EU could reach a decision on how to respond.

He said: “What happened is an international scandal, the lives of European civilians were at risk. This not acceptable and is why we put the sanctions debate on the table of the European Council. 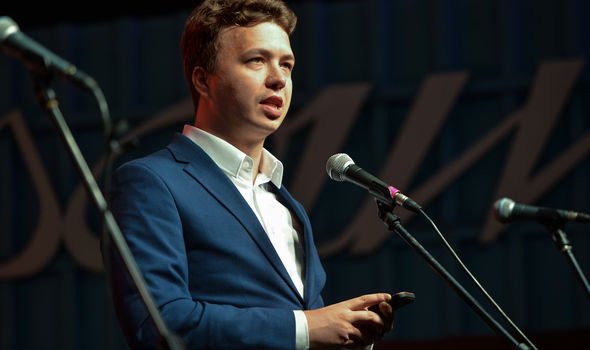 “We call for his immediate release. We believe this action is contrary to all principles of democracy, freedom of association, free speech, and also endangered, European citizens and the crew on that aeroplane and its behaviour that’s not acceptable.”

“Many leaders this evening will be discussing this and we from an Irish perspective will be calling for a very firm and strong response to this action,” he added.

Ryanair also branded the move by Belarus, which was said to be ordered by its president Alexander Lukashenko, a “state-sponsored hijacking”.

The airline’s chief Michael O’Leary told Irish Newstalk radio: “It appears the intent of the authorities was to remove a journalist and his travelling companion.

“We believe there were some KGB agents offloaded at the airport as well.”