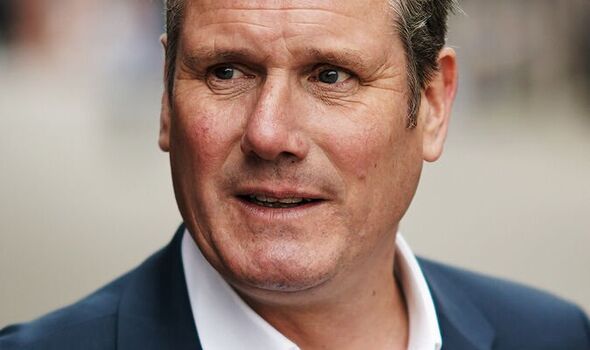 Allies of the Labour leader insist his vow to quit if he is issued with a fixed-penalty notice in relation to a beer and curry with activists shows he has integrity. Mr Malthouse said: “I don’t know what Keir Starmer is attempting to do. Whether he’s attempting to turn what is obviously a slightly mysterious situation into a sort of political one, I don’t know.

“In the end we have to leave space and time for Durham police to do their job, which I know they’ll do with professionalism and exactitude.”

Mr Malthouse insisted if Sir Keir did decide to quit it did “not necessarily” mean Boris Johnson, who has already been issued with a fine, should do the same.

He added: “In any situation where the rules were moving around, there were misunderstandings or mistakes, and apologies are made and they are accepted, then people of all walks of life should be able to keep their jobs.

“But Keir Starmer has to speak for himself and set his own standards.”

Sir Keir’s decision to place his future in the hands of Durham police over the evening with colleagues in April last year is a huge political gamble.

Shadow education secretary Bridget Phillipson said the decision showed the Labour leader is “a man of integrity and a man of decency, unlike the Prime Minister, who has been found to have broken the law and still clings on at Number 10”.

She added: “We maintain that nothing was done that was inconsistent with the rules.”

Sir Keir faced jibes over the allegations in the Commons during the opening of the Queen’s Speech debate, where the first two MPs to speak traditionally make a light-hearted speech.

The Labour leader laughed as Conservative Graham Stuart, MP for Beverley and Holderness, told the chamber: “Never, Mr Speaker, never in the history of human conflict, has so much karma come from a korma.”

But Sir Keir remained stony-faced when the Prime Minister repeatedly referred to him as the “leader of the Opposition of the moment”.