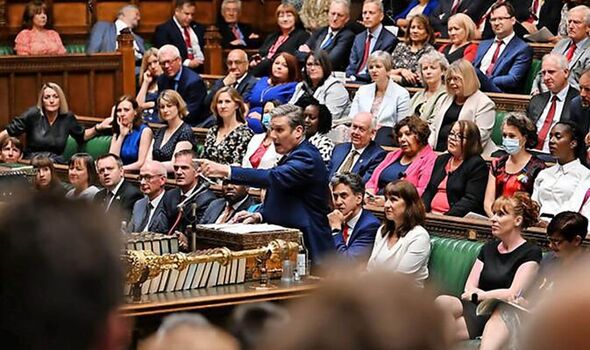 But his efforts at wit left everybody cringing. Sir Keir steered clear of the two main political issues of the day – deportations to Rwanda and the Northern Ireland Protocol – and focused on the economy, a tricky topic for any politician trying to show they have a sense of humour. Attempting to avoid more accusations of “boring voters to death”, he told the Commons that Mr Johnson attempts to play “Jedi mind games” over the country’s economic performance, but “the problem is, the force just isn’t with him any more. He thinks he’s Obi-Wan Kenobi – the truth is, he’s Jabba the Hutt.”

Labour MPs behind him struggled to give a supportive laugh.

Next, he switched to ITV’s dating show Love Island, where the least popular skimpily clothed contestants are voted out by the public. “He is game-playing so much he thinks he is on Love Island,” Sir Keir said.

“Trouble is, Prime Minister, I am reliably informed that contestants that give the public the ‘ick’ get booted out.”

Shadow Chancellor Rachel Reeves, who sat at his side during PMQs, looked agonised as the Labour leader chuckled. Sir Keir then read out from a “long list” of what Tory MPs really think of Mr Johnson, shouting like a supply teacher berating a class of pranksters: “Who said that? Come on! Who was it who said that?”

He went on to say that his personal favourite was a document compiled by Tory MPs calling Mr Johnson the “Conservative Corbyn”. But this was an own goal Mr Johnson seized on – pointing out that Sir Keir had tried “repeatedly” to get Jeremy Corbyn elected as Prime Minister, before adding the Labour leader’s predecessor was actually “relatively dynamic by comparison”.